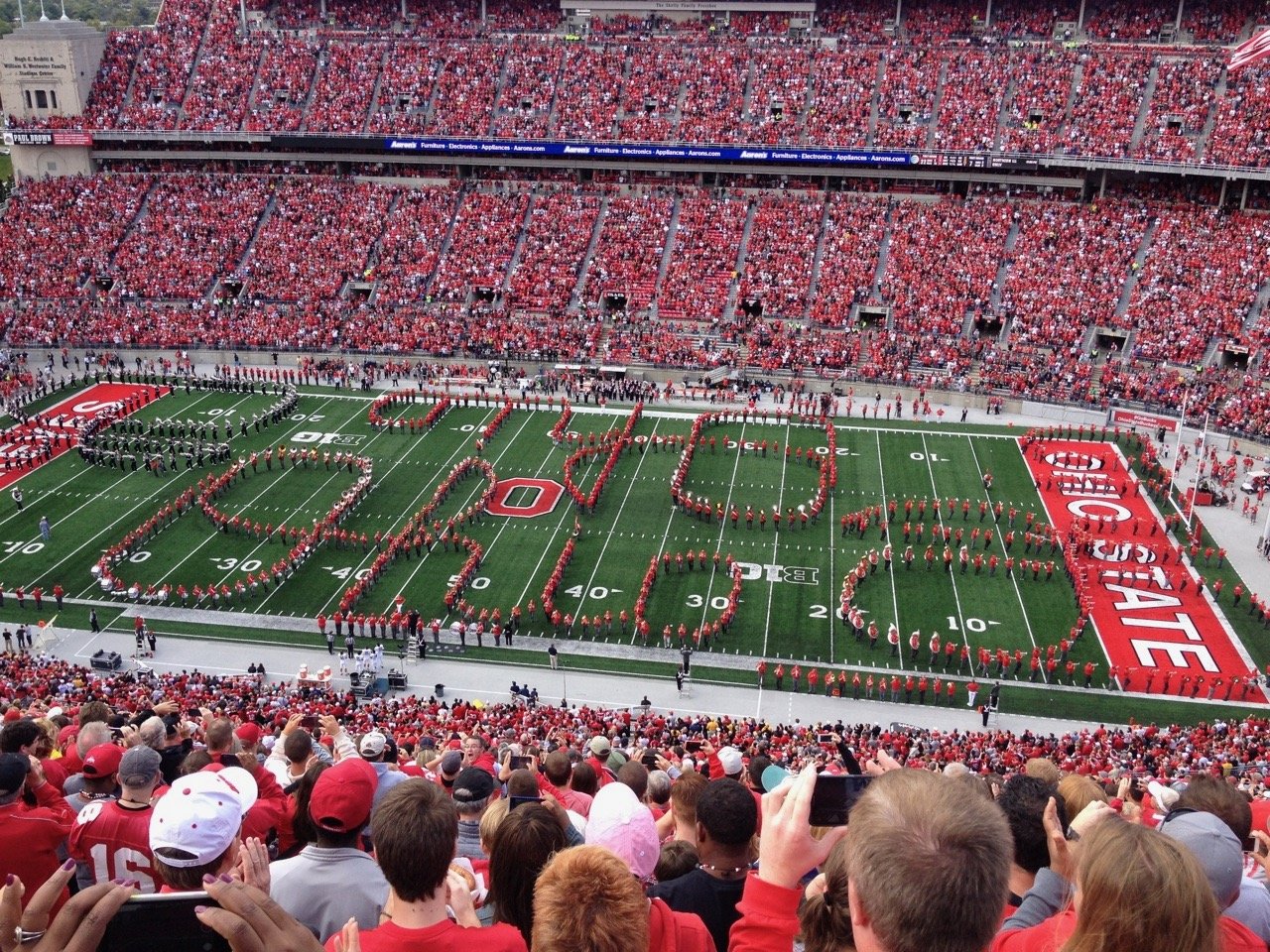 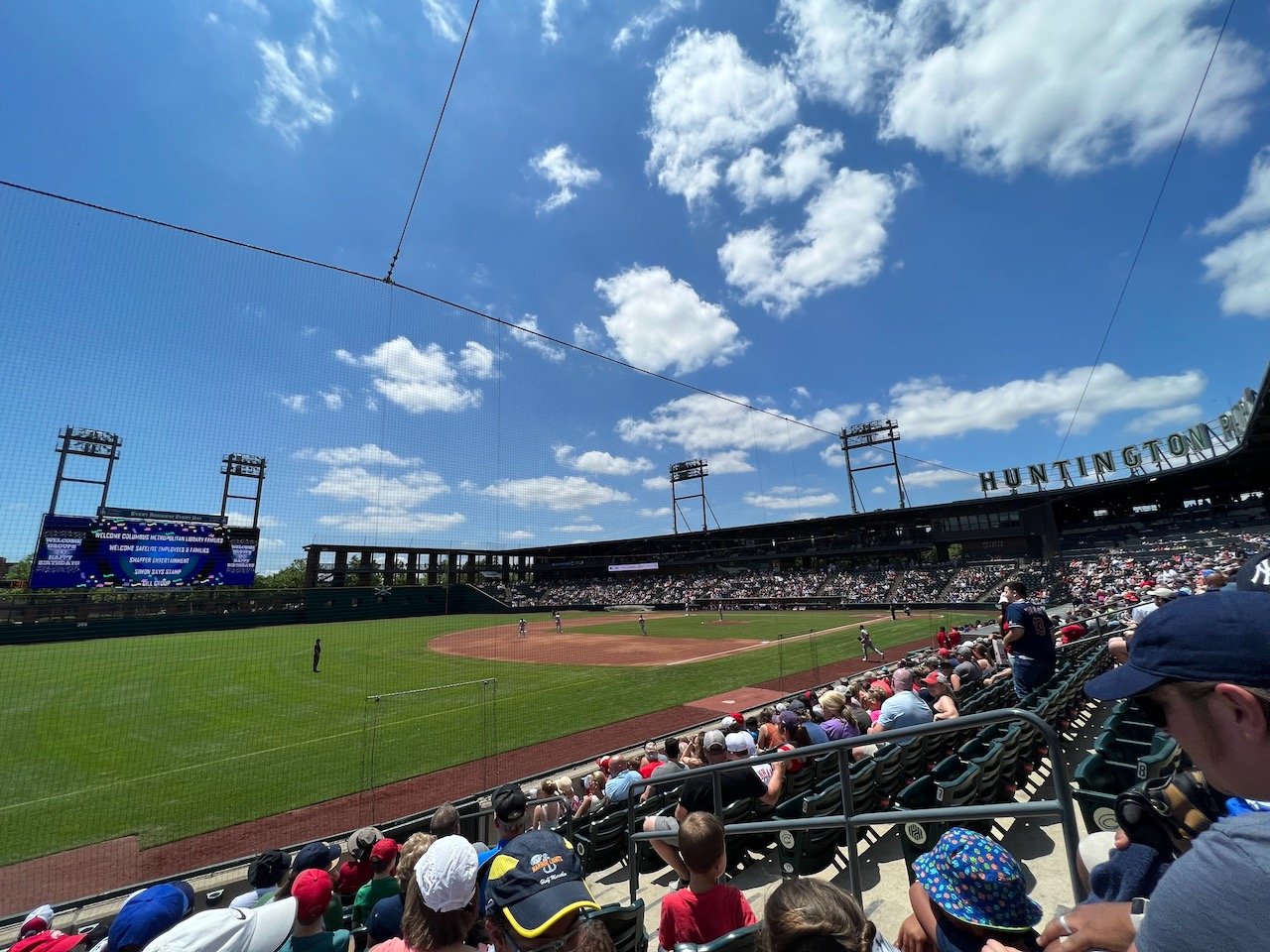 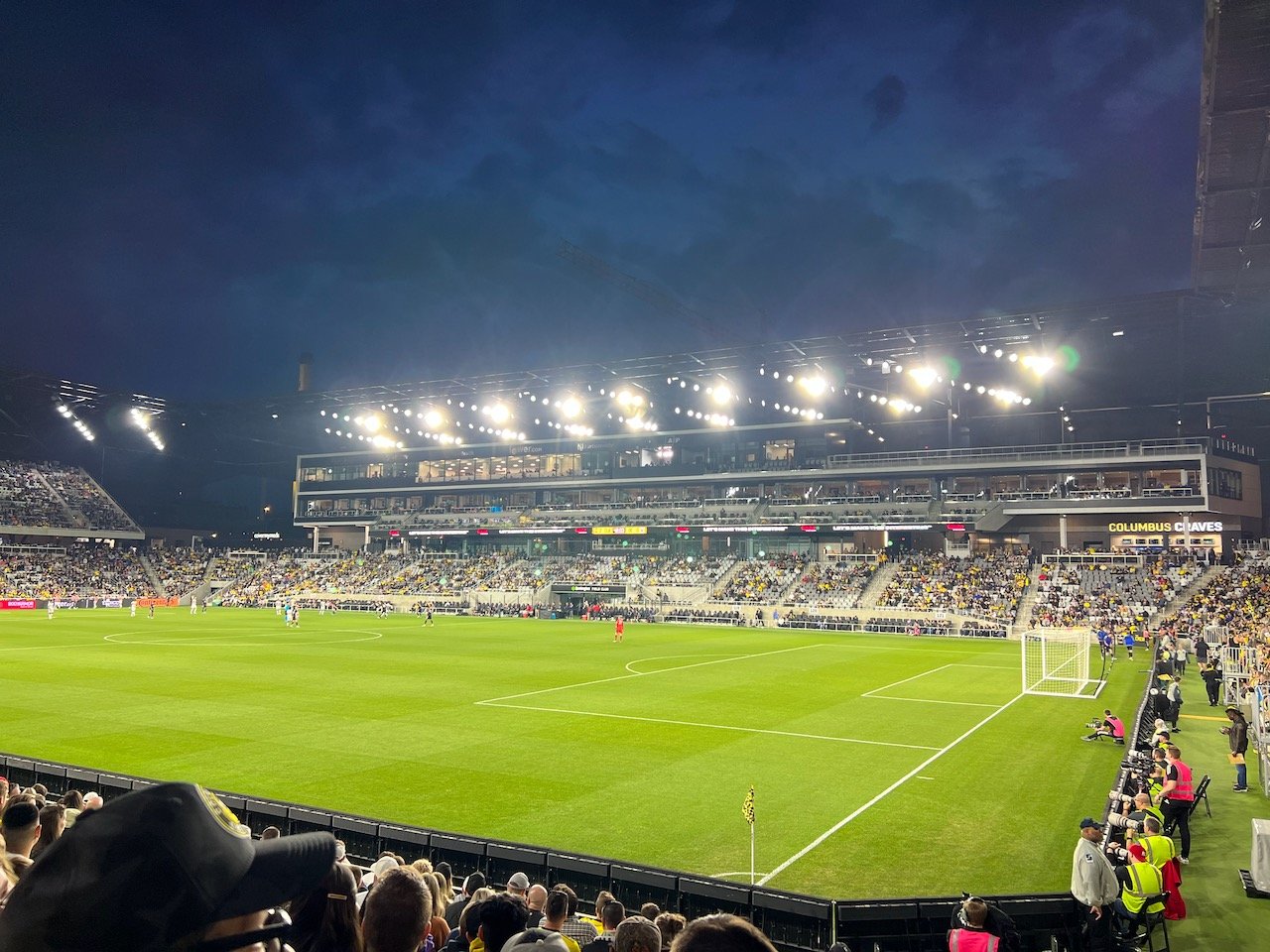 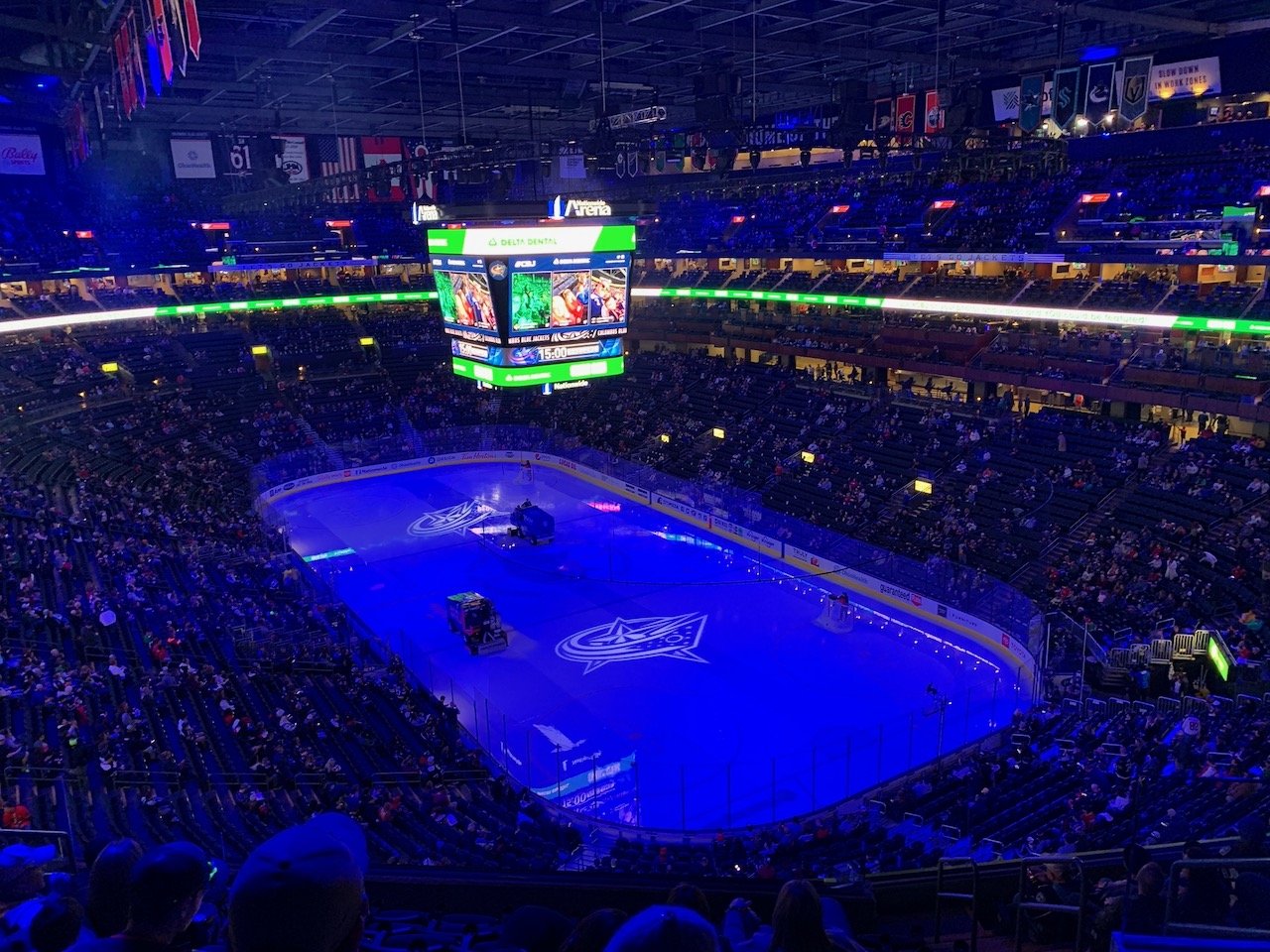 Disclaimer: this post is part of a partnership with the Greater Columbus Sports Commission. Photos and opinions are our own.

There’s no doubt Columbus is a sporting town, from the Ohio State Buckeyes to the Blue Jackets, Clippers and Crew, the Arnold plus all the visiting athletic events at the Convention Center or other venues. Whatever the game, local fans and visiting aficionados love making a day of it, grabbing dinner and drinks beforehand, strolling walkable neighborhoods, hitting up a bar or late night eats as things wind down. 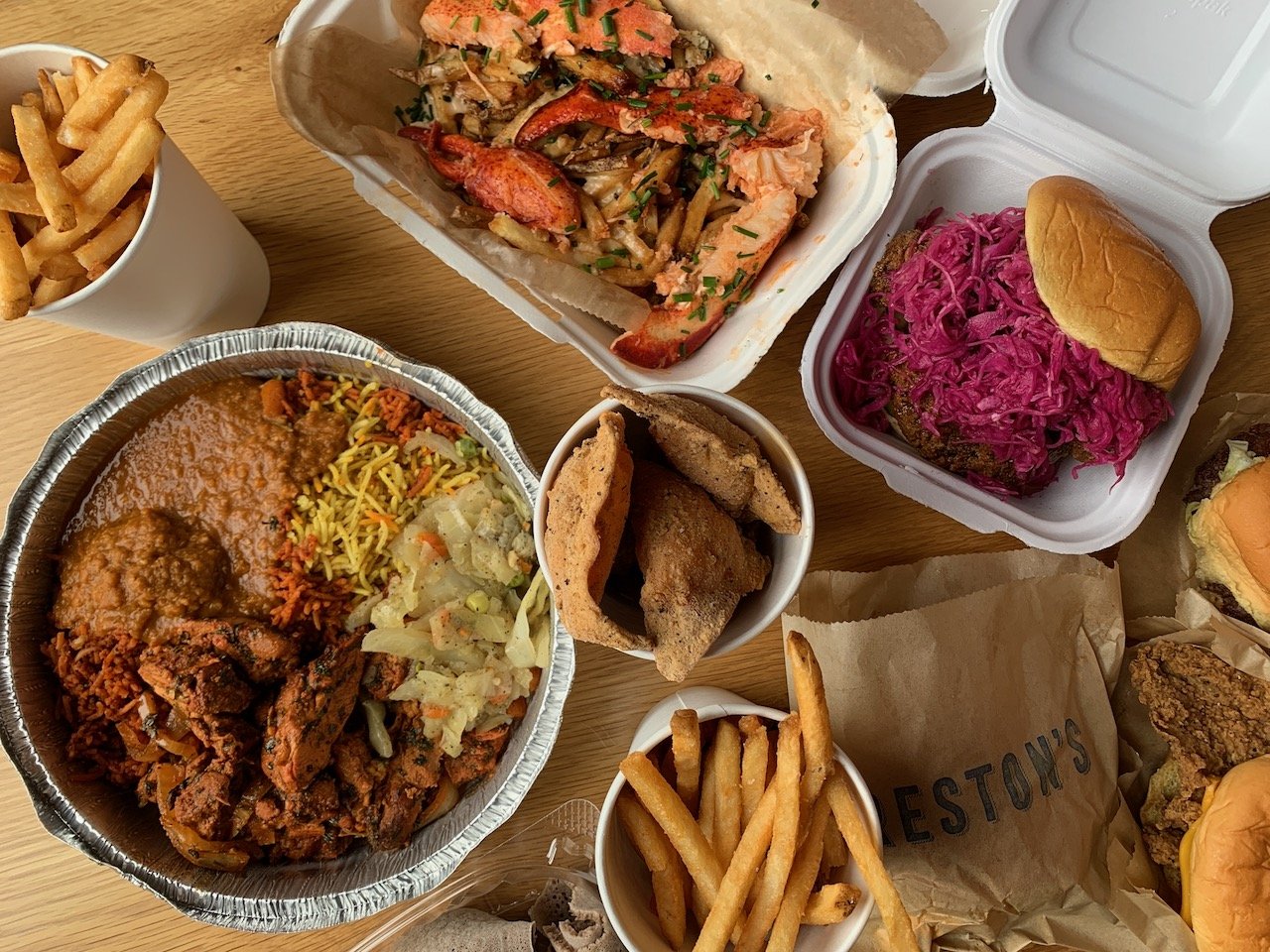 Fried Chicken, Ice Cream, and Everything In-Between at North Market

The historic North Market downtown is a must-stop for anyone getting to know Columbus’ culinary scene. The market hall has helped grow a number of local favorites: it’s the starting point for Jeni’s Ice Creams, it served as Hot Chicken Takeover’s first full location, and kicked off Dos Hermanos, Barrel & Boar, Bubbles Tea & Juice. At North Market you can travel the world without leaving central Ohio: taste everything from Nepali dumplings to Mediterranean fatayers, pierogis to ramen to Somali rice and chicken. 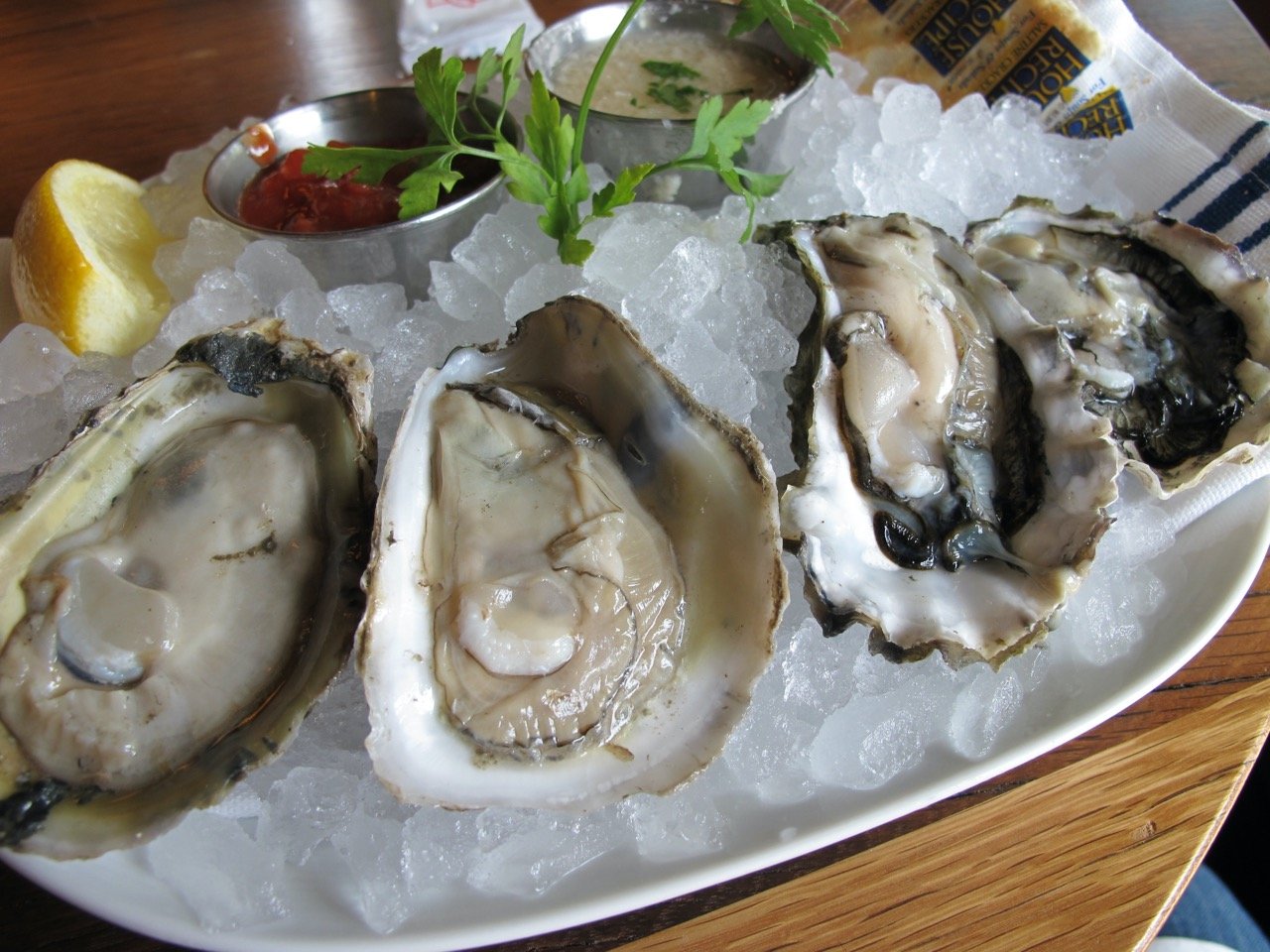 Oysters and Beer at The Pearl

Sitting across from Nationwide Arena, Boston Pizza helps you fuel up before a game with everything from fried cheese curds to buffalo cauliflower, giant salads to wings. Don’t miss their signature pies, with favorites like the Mama Meata or the Hawaiian BBQ. 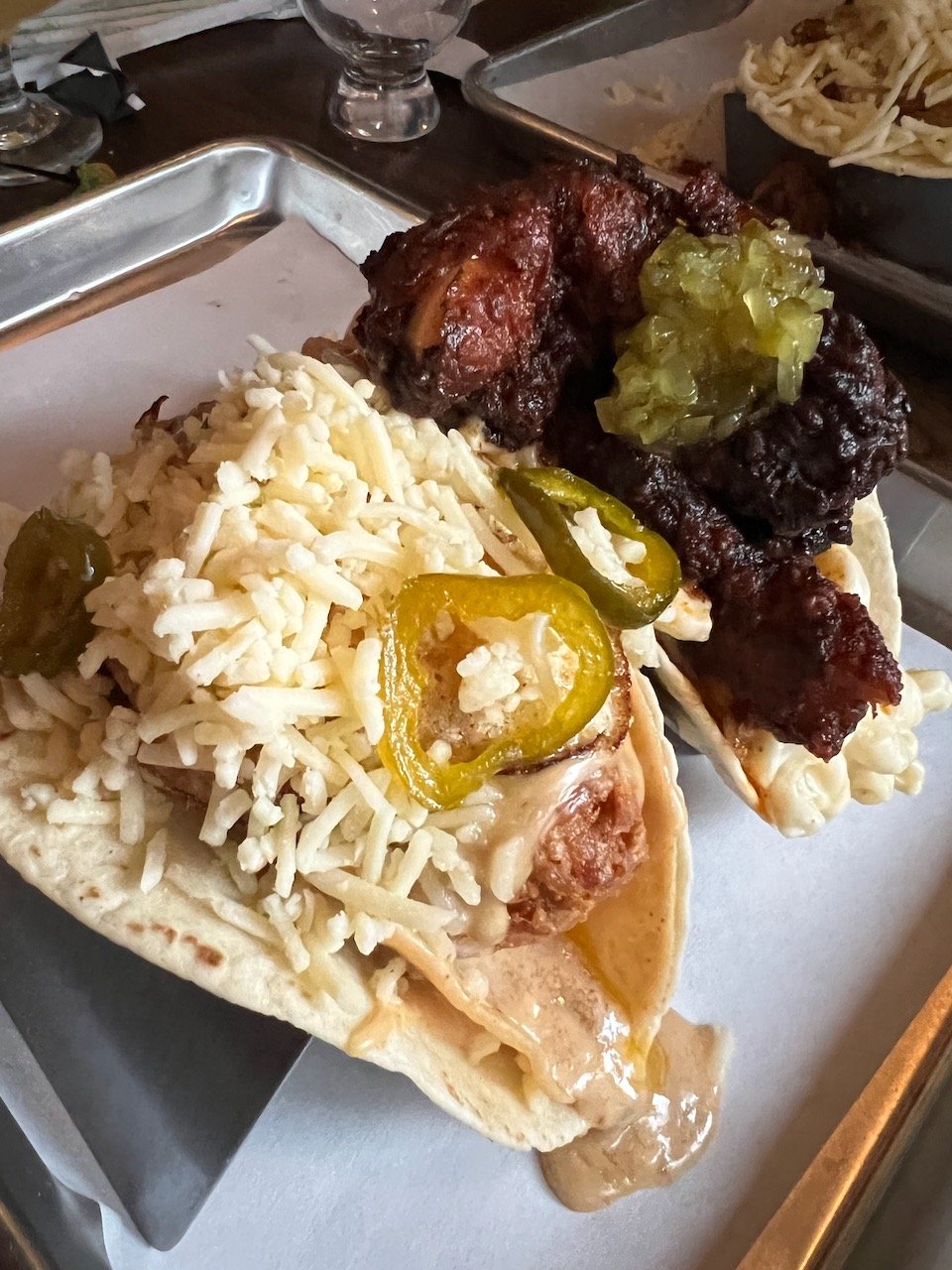 The new Agave & Rye across from the Convention Center blends eclectic décor, fun music, over-the-top tacos, and a huge whiskey and tequila selection. Be sure to come hungry! You can try tacos with toppings similar to Detroit-style pizza, huevos rancheros, or a McDonald’s Happy Meal. There’s even one with kangaroo!

Sitting just off Neil Avenue in Victorian Village, Alqueria offers rustic farmhouse fare that’s warm and comforting. Kick back on the patio with a meat and cheese board, fried green tomatoes with pimento cheese, or hearty entrees like buttermilk fried chicken, pan-roasted walleye, or NY strip.

Columbus has no shortage of great breweries, and an expertly brewed craft beer is the perfect complement to any game day. You don’t have to travel far to find taprooms and brewpubs aplenty downtown, in the Arena District, and the Short North.

Here are the highlights:

(Visiting for a few days? Pick up a Columbus Ale Trail passport at any brewery and collect stamps to earn swag!)

We rounded up spots for drinks and late night eats, too! 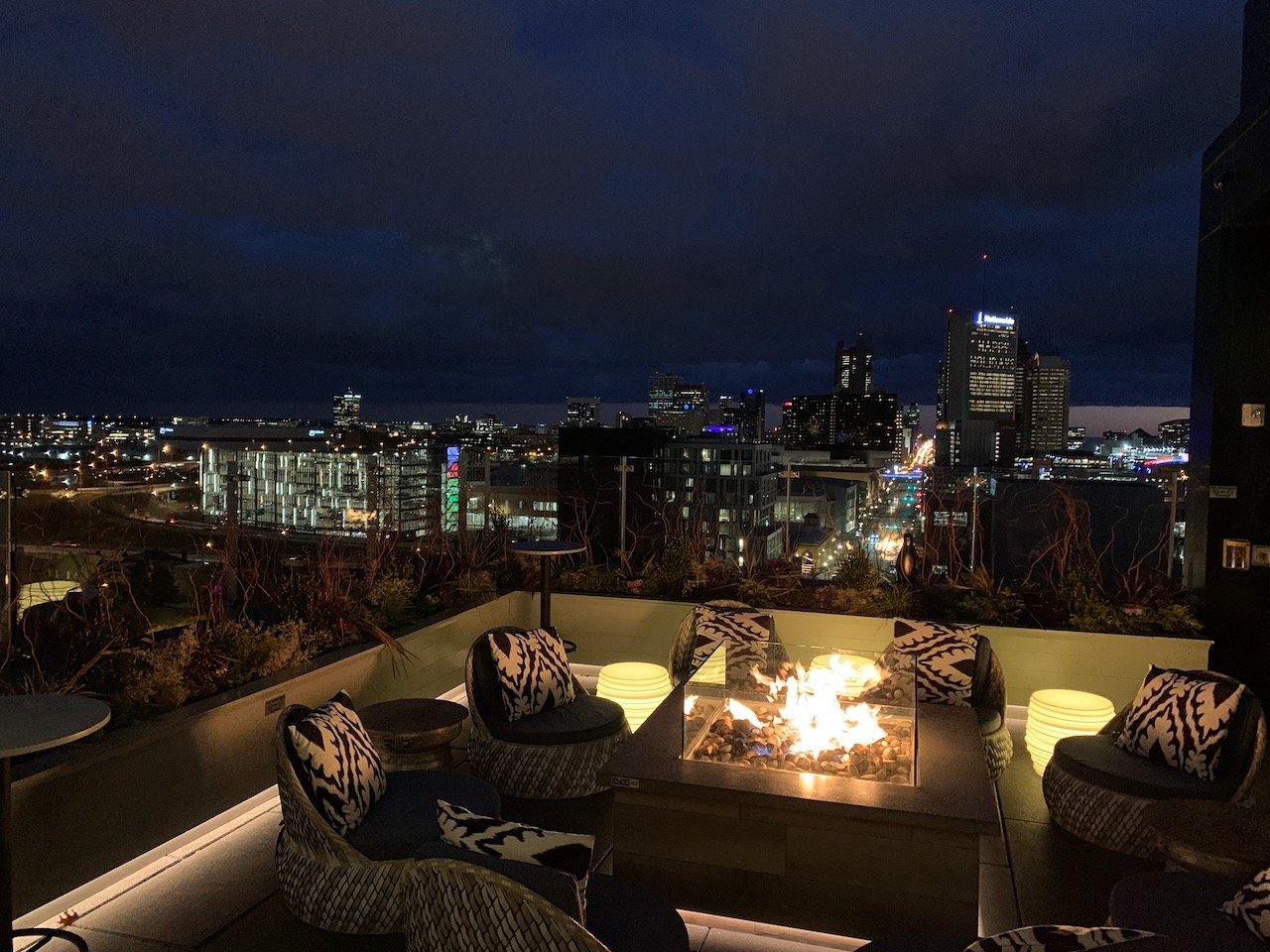 Cameron Mitchell’s rooftop bar gives you ninth-floor views of the Short North and downtown. Even in the colder months you can warm up with a cocktail and small plates around the firepit.

In the Arena District, Goodale Station on top of the Canopy By Hilton also offers elevated views of the city. The chef-driven restaurant features thoughtfully composed dishes paired with beer, wine, and cocktails. 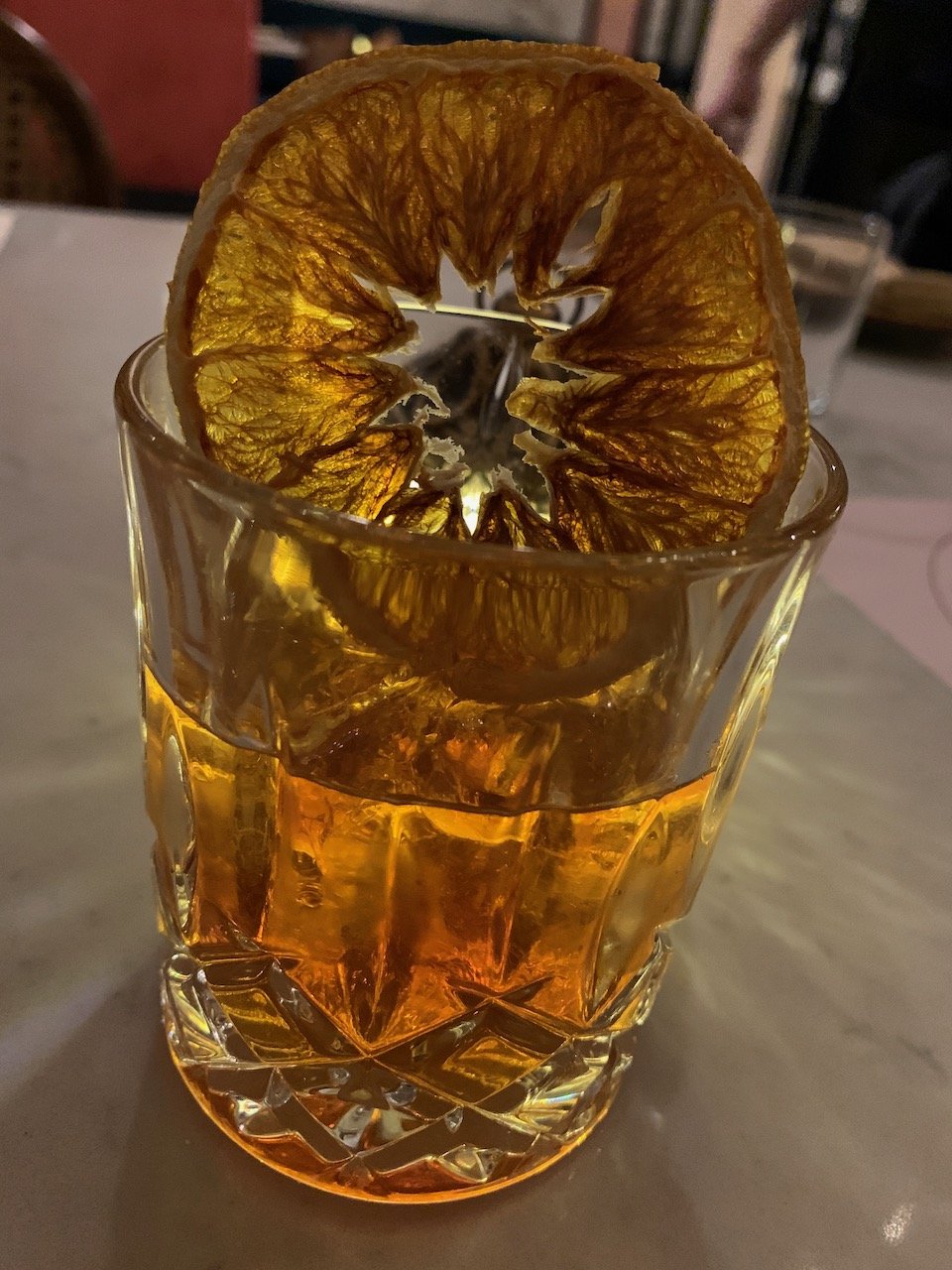 Modern Indian and Cocktails at Rooh

For fans of Indian food, Rooh offers a modern, progressive take on traditional fare. The cocktail menu is built around the six rasas, or tastes, from the Indian practices of ayurveda. It’s paired with delightful dishes like butter chicken and creatively topped kulchas.

True to its name, Alibi will give you an excuse to get out and sip cocktails or start working your way through their handsome whiskey list. 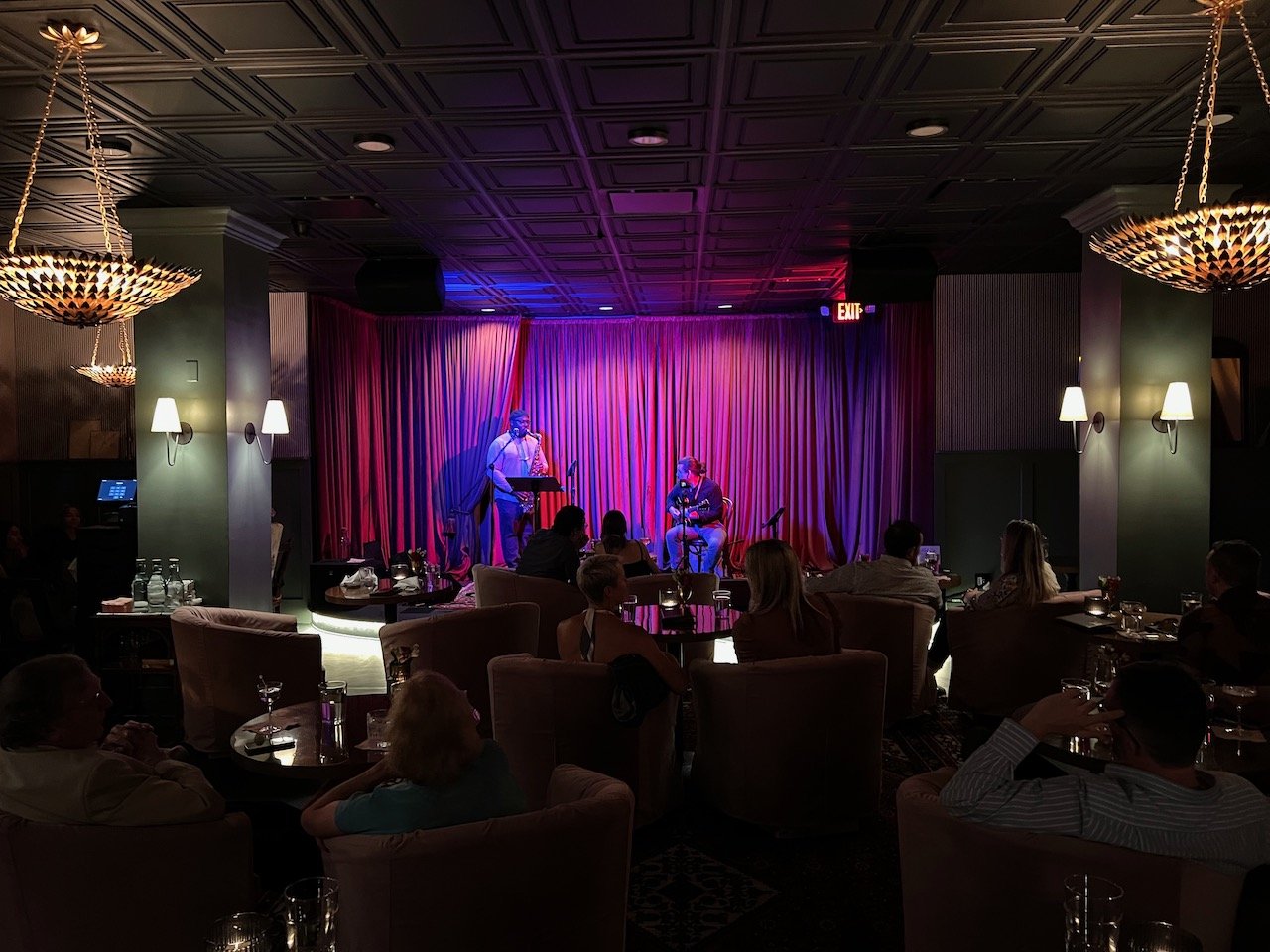 Wind Down with Live Music at Ginger Rabbit

Plan ahead by booking at table at Ginger Rabbit Jazz Lounge, a new downstairs cocktail bar and live music venue in the Short North. Catch a rotating lineup of accomplished local musicians, and pair it with classic cocktails and small plates like charcuterie and smoked fish.

Drinks with Friends at Mouton

This Short North cocktail bar is the ideal place to gather with friends. Order up a classic cocktail or see what the crew behind the bar have created lately.

The Creative Neighborhood Bar at The Bottle Shop

The cozy and eclectic Bottle Shop in Victorian – conveniently next door to Alqueria – offers a curated selection of craft beers, natural wines, and cocktails. If you’re keeping the party going, pick up a six-pack or bottled cocktail in the store. 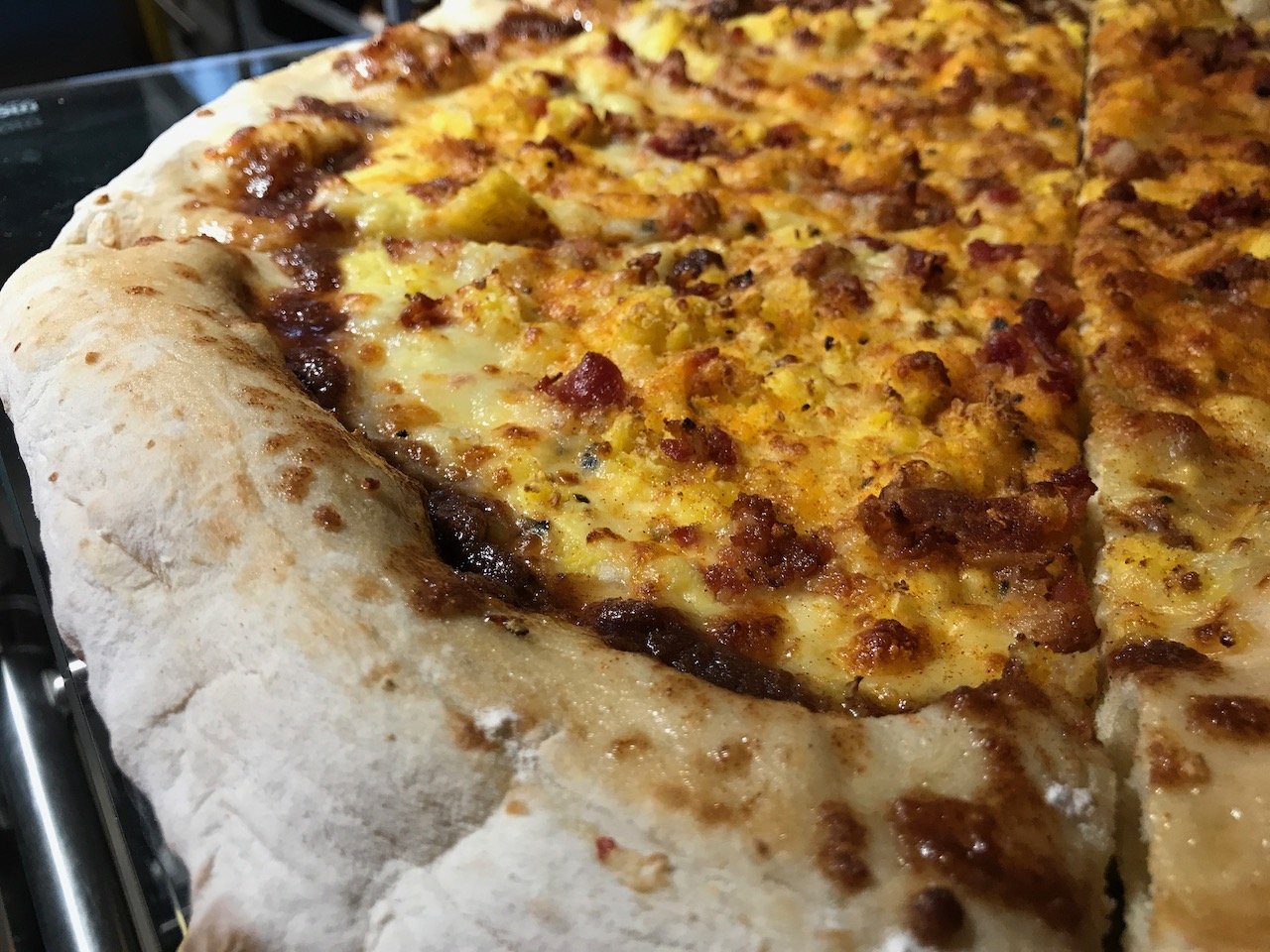 Mikey’s is one of Columbus’ original late night eats. They serve up giant, crave-able pies with pepperoni, mushroom, and a crazy flavor of the week. Hit up their full-service shops on High Street across from the Convention Center, downtown on Fourth Street (next to loads more late-night eats + an arcade), or the original shop in a small shack in the Short North.

This Short North institution is a cozy dive serving comfort foods like the Press burger (a cheeseburger with an egg), quesadillas, meatloaf, Nathan’s famous hot dogs. Hit them up for their daily specials, like Thursday night Thanksgiving dinners! 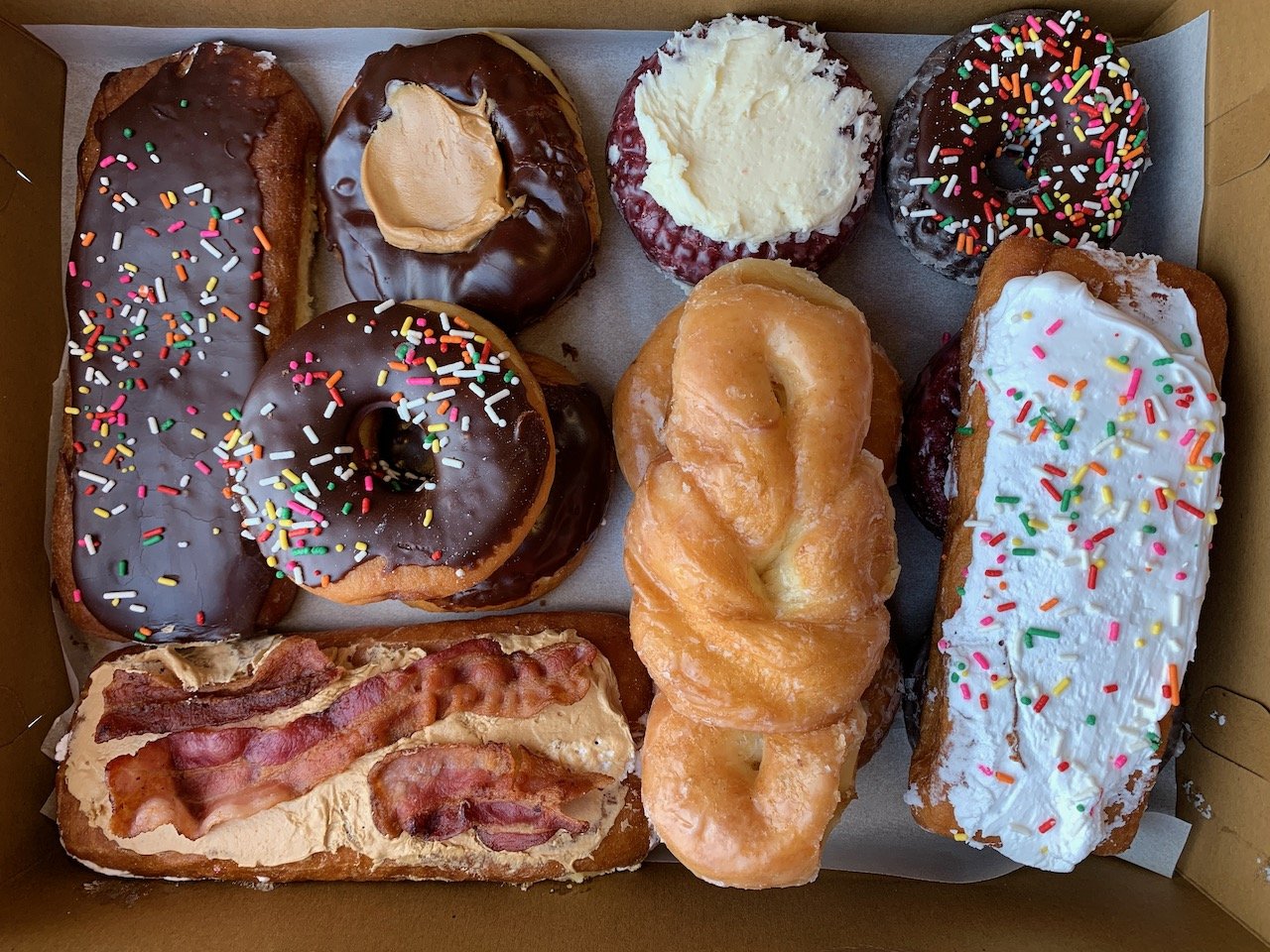 Named for the arches that line High Street – both historically and today – this Short North tavern pleases crowds with their pizzas, burgers, and fresh-cut parmesan truffle fries. Or schedule a visit to coincide with weekend brunch!

With over 50 years in business, this 24/7 family-run donut shop has served generations of Ohio State students. Hit them up for fresh donuts (don’t miss the signature buckeye donut!) and coffee, or stick around for gyros and breakfast sandwiches.

Disclaimer: this post is part of a partnership with the Greater Columbus Sports Commission. Photos and opinions are our own.