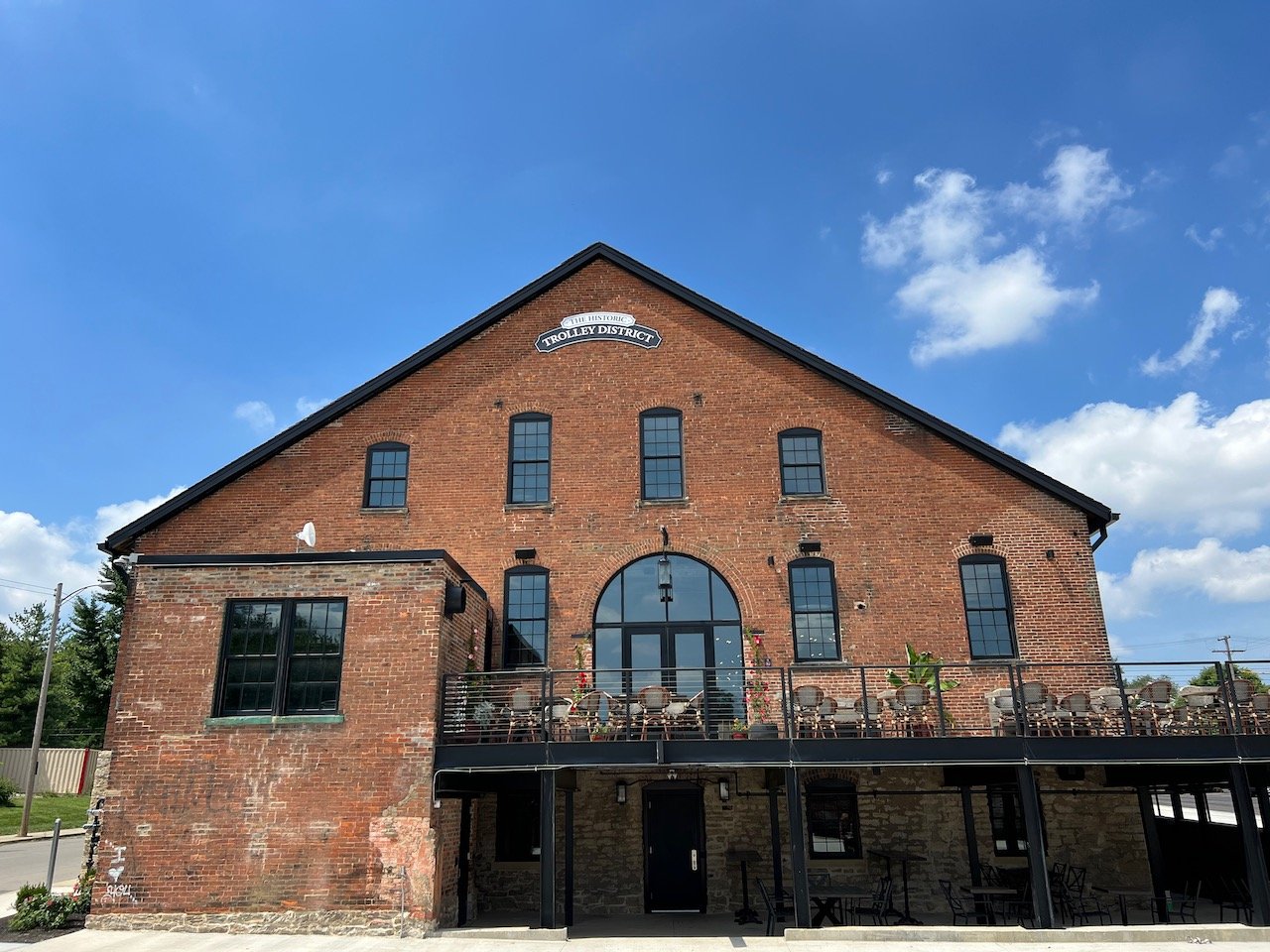 There are a lot of fun developments coming to the Columbus culinary scene, but one of the most interesting additions is the East Market in the Historic Trolley District, sitting just a block south of Franklin Park.

Columbus doesn’t have a great track record when it comes to preserving historic buildings, but this one feels like a real win. This area was originally built from the 1880s to 1920s, and housed several buildings for constructing streetcars and carriages for the Columbus Railway & Light Co. But it sat abandoned for decades, and I’m sure was in danger of getting bulldozed before redevelopment was announced several years ago. (Read a helpful history of the Trolley District on Wikipedia.) 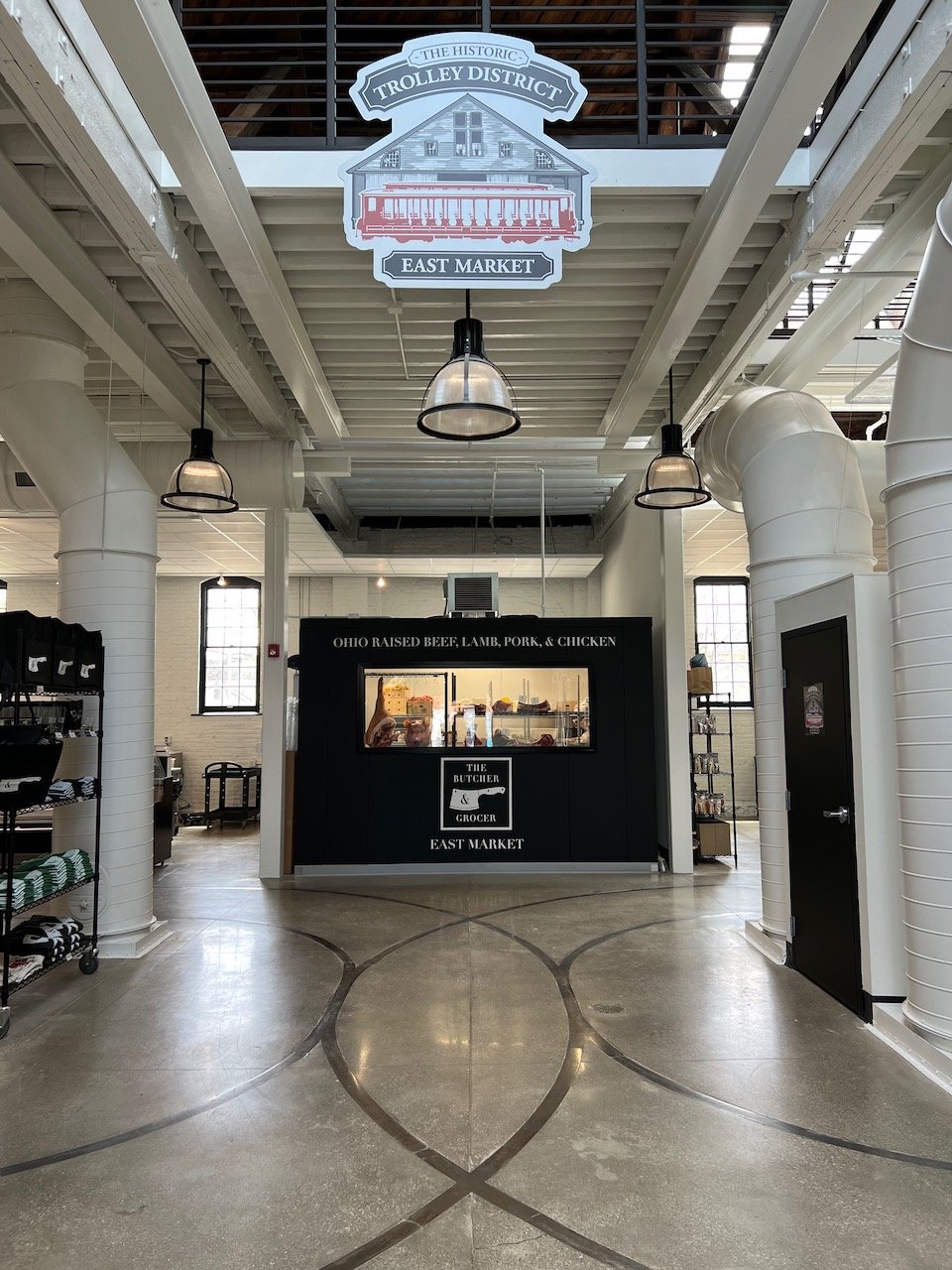 The largest space, the former streetcar paint shop, has been given a full modern makeover into a market hall, with nods to the building’s history throughout. My favorite detail are the streetcar rails still embedded in the floor.

The name East Market also hearkens back to the former markets that dotted the east, west, central, and north parts of Columbus (hence the name for our famous North Market). 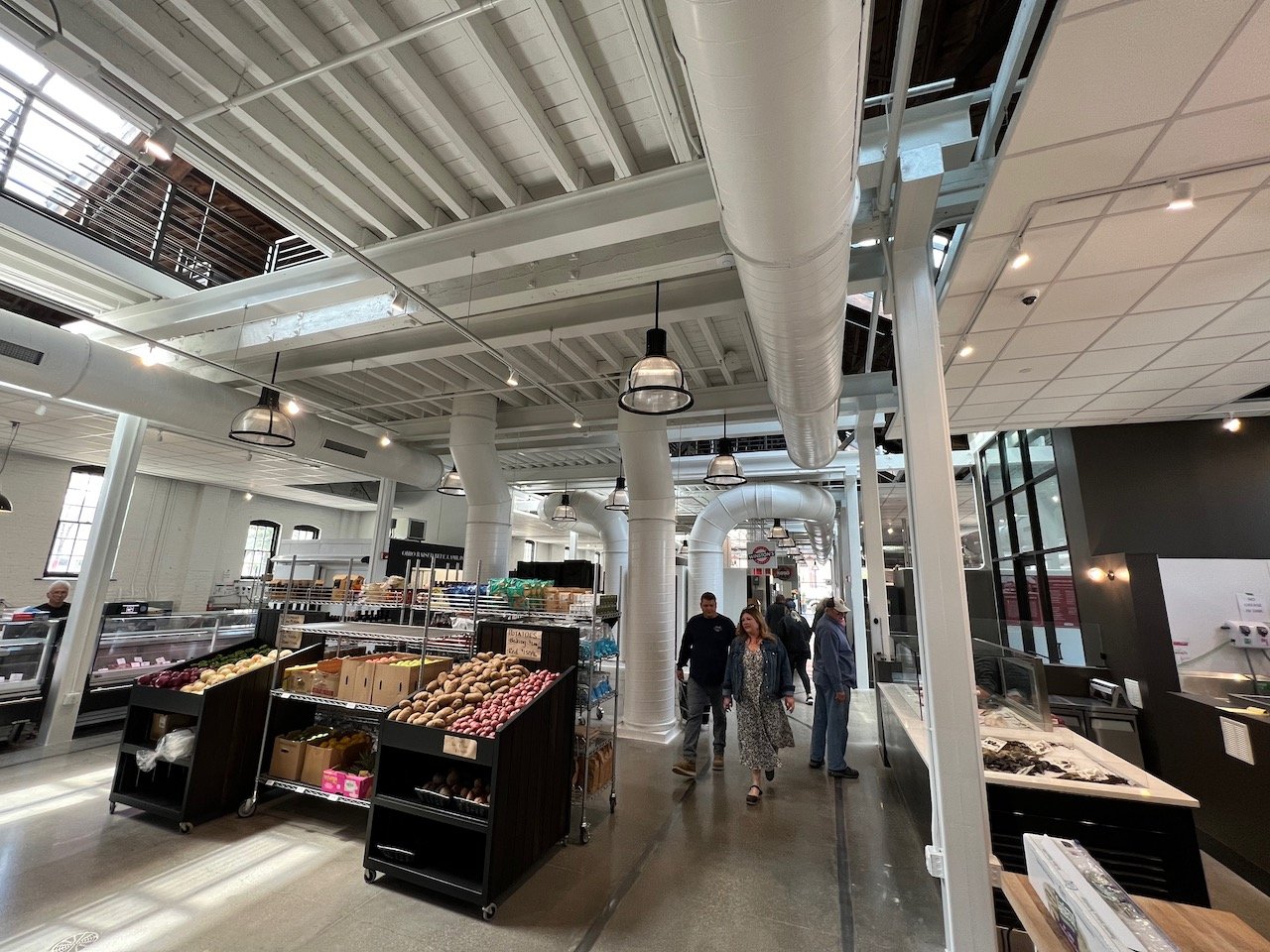 Most of the market’s vendors are now active, although there are a few stalls yet to filled or fully opened. 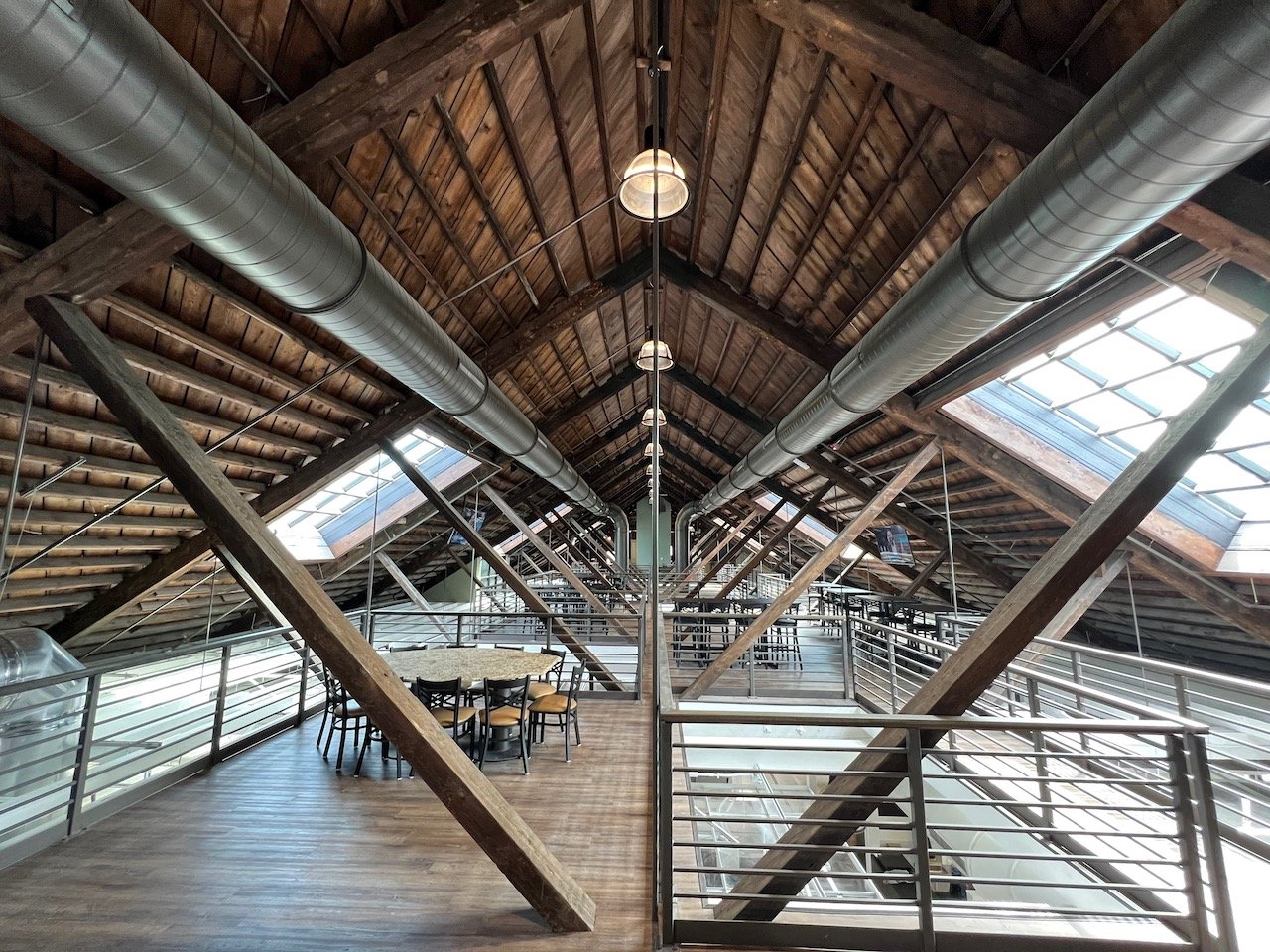 The upper level has also been beautifully renovated into seating and event spaces, with skylights and openings to the market below. 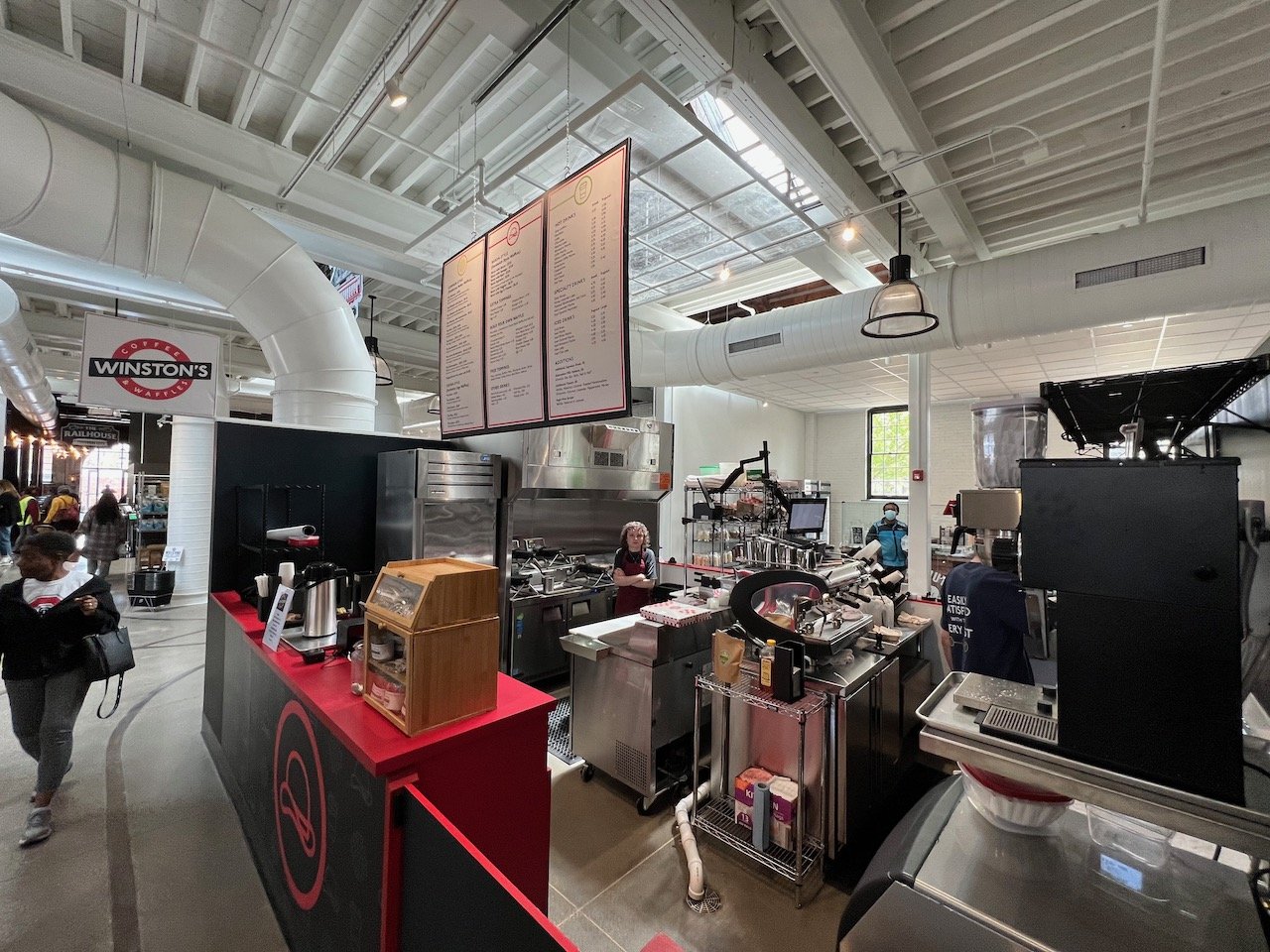 Inside the main entrance off the parking lot you’re greeted with a location of Winston’s Coffee & Waffles. 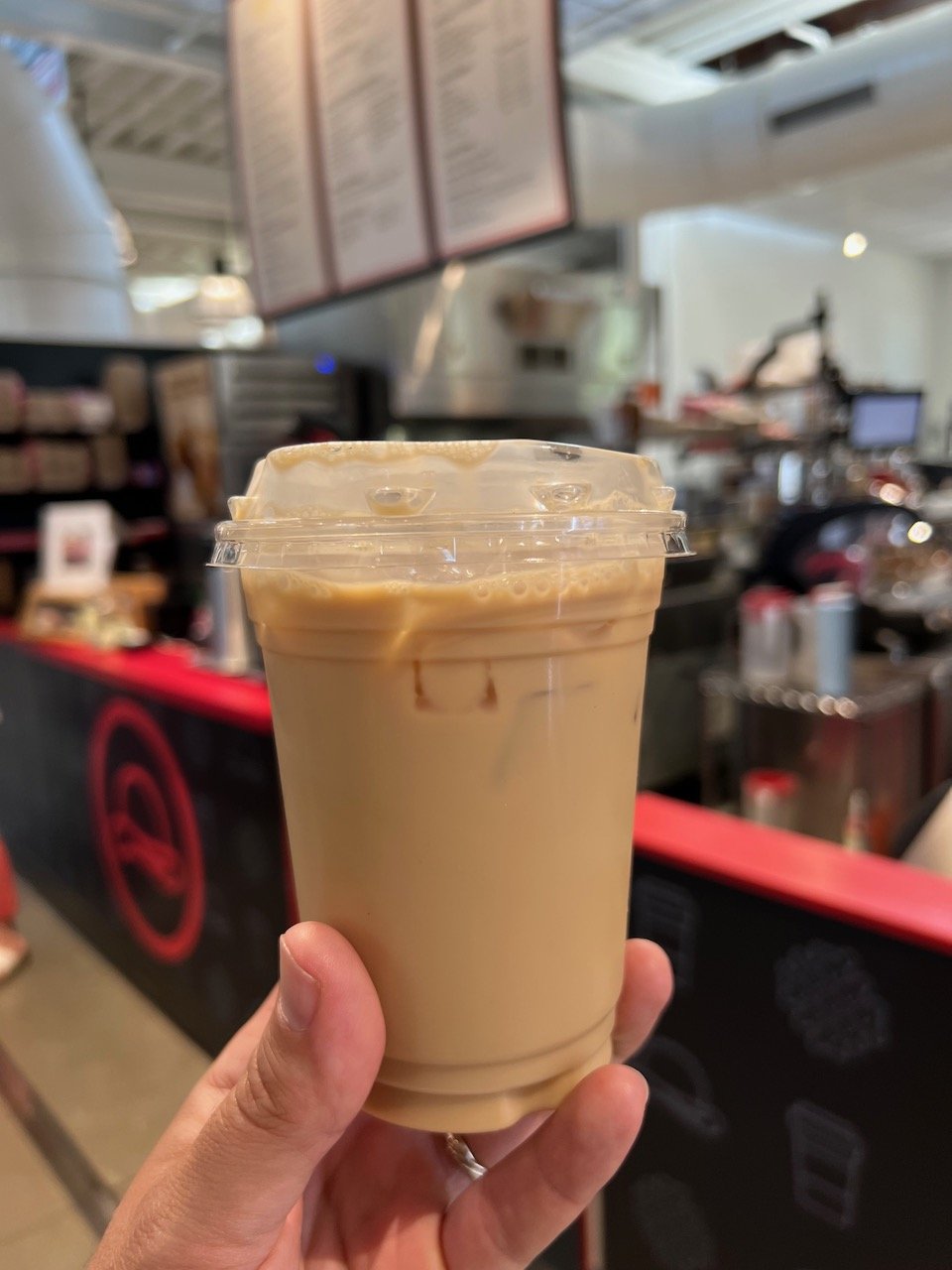 In addition to their sweet and savory waffles, Winston’s offers a full coffee bar with espresso, cold brew, you name it. 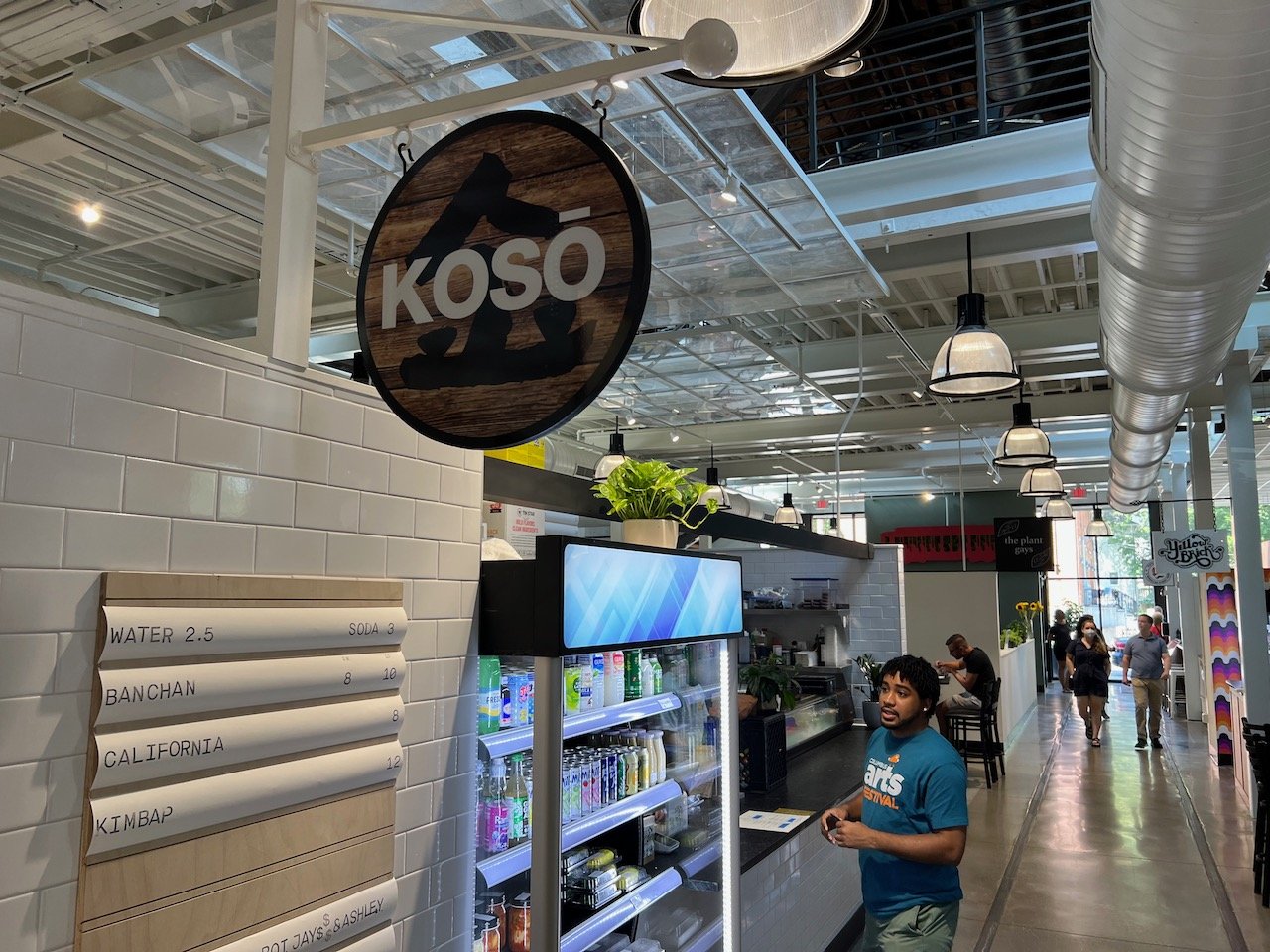 KOSO is quickly becoming a market favorite for its nod to the night markets in Seoul. You’ll find wings, bibimbap, bulgogi, udon noodles, maki rolls, and much more. 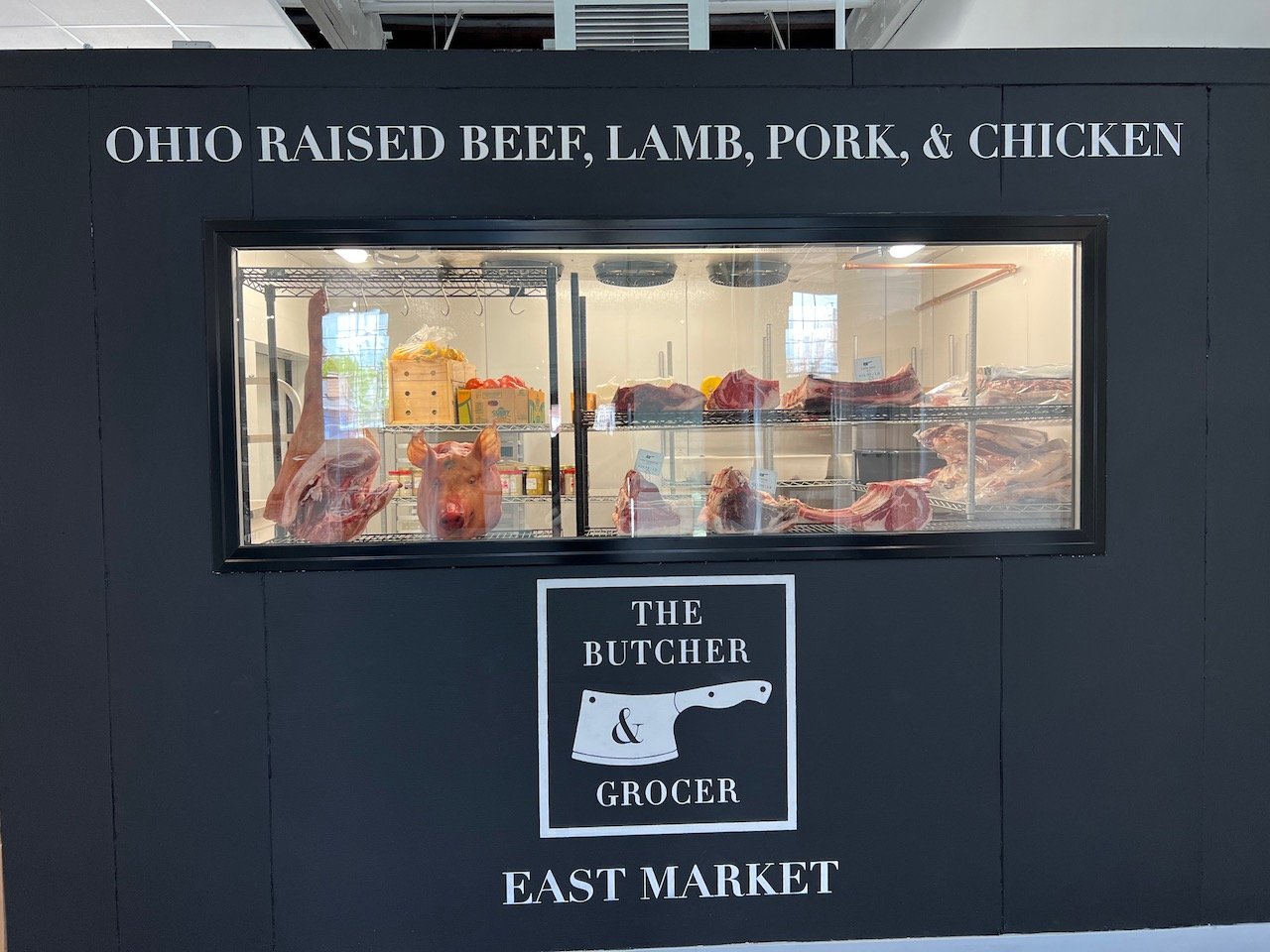 The Butcher & Grocer forms one of the market centerpieces, featuring a Ohio meats, house-made sausages, and seafood, plus shelves stocked with groceries (focused on loads of Ohio items). 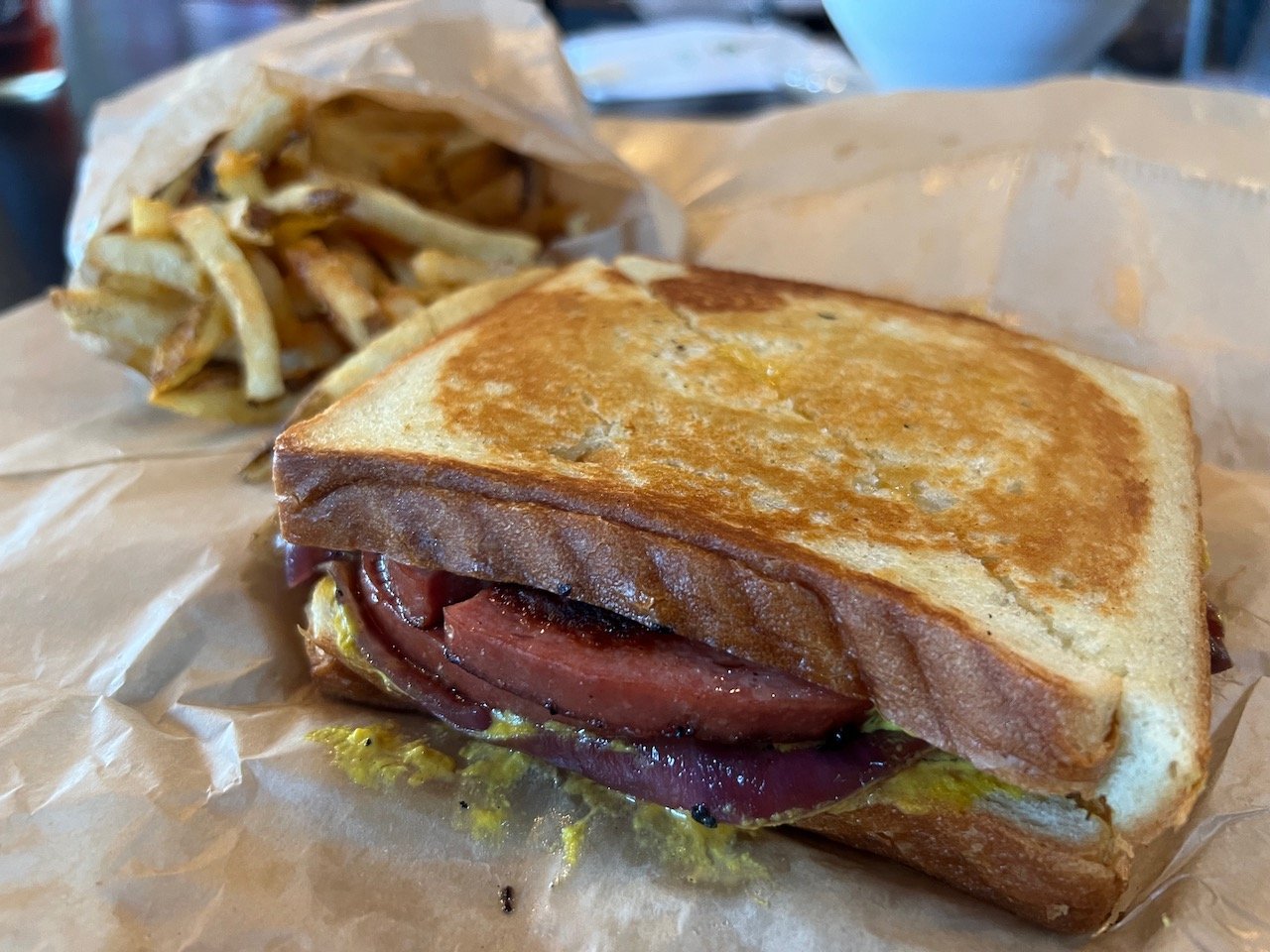 They also whip up prepared foods like burgers, sliders, sandwiches, fries. They’re one of the few places in Columbus where you can get French fries properly fried in beef fat.

I’d highly recommend an order of fries with their fried bologna sandwich! 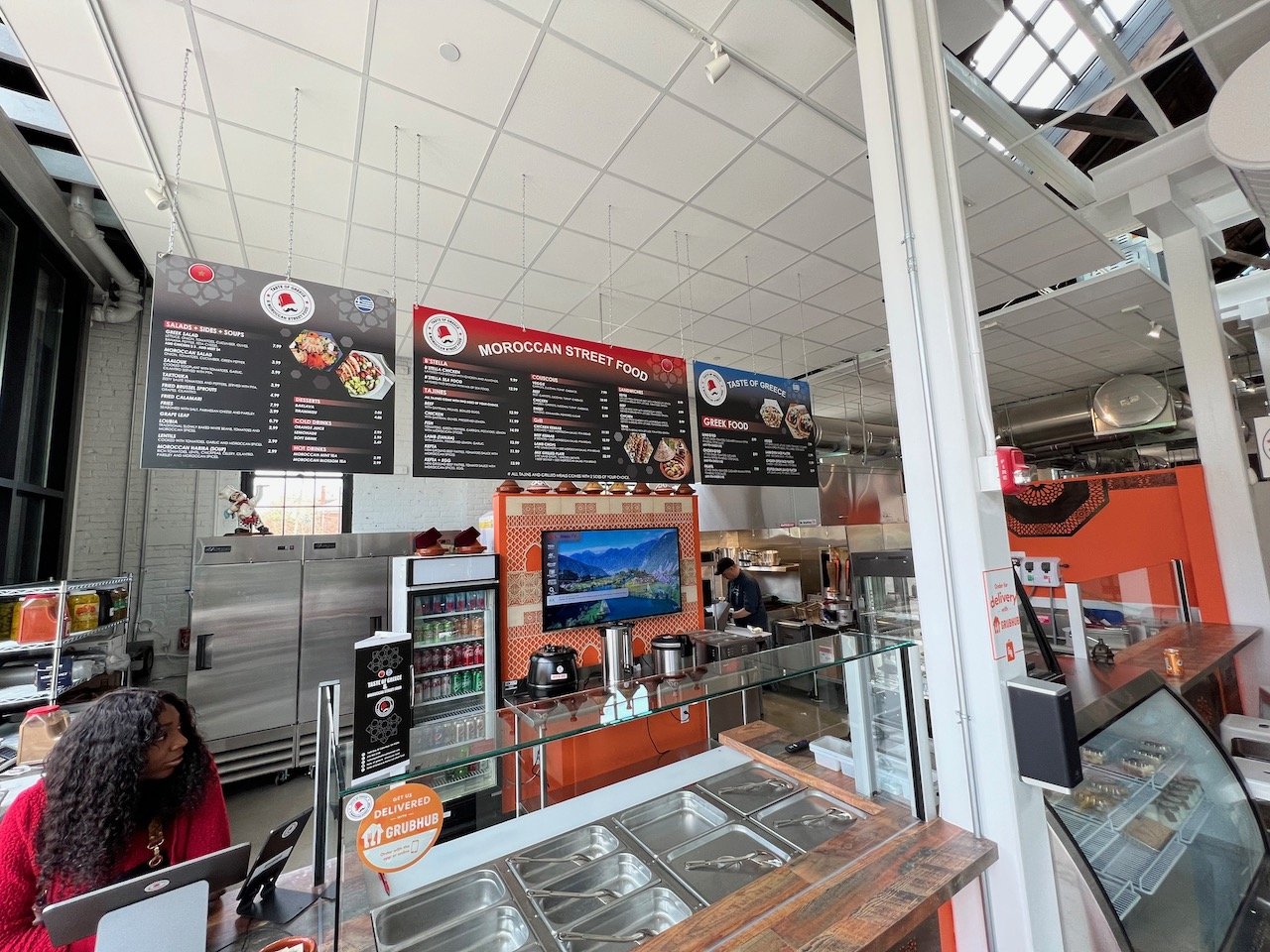 Taste of Greek and Moroccan Street Food features everything from gyros to stuffed grape leaves, kebobs to Moroccan tajines. 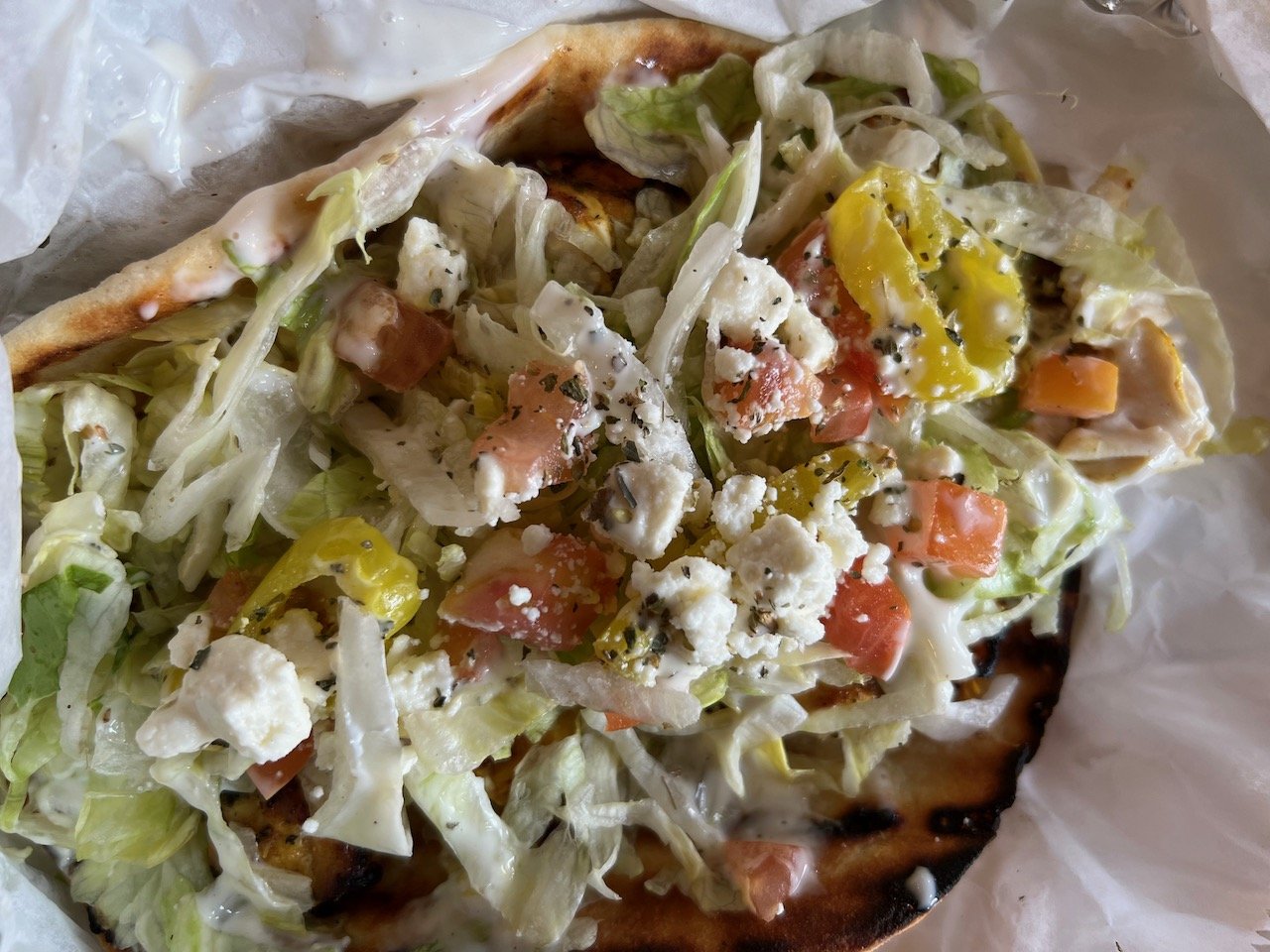 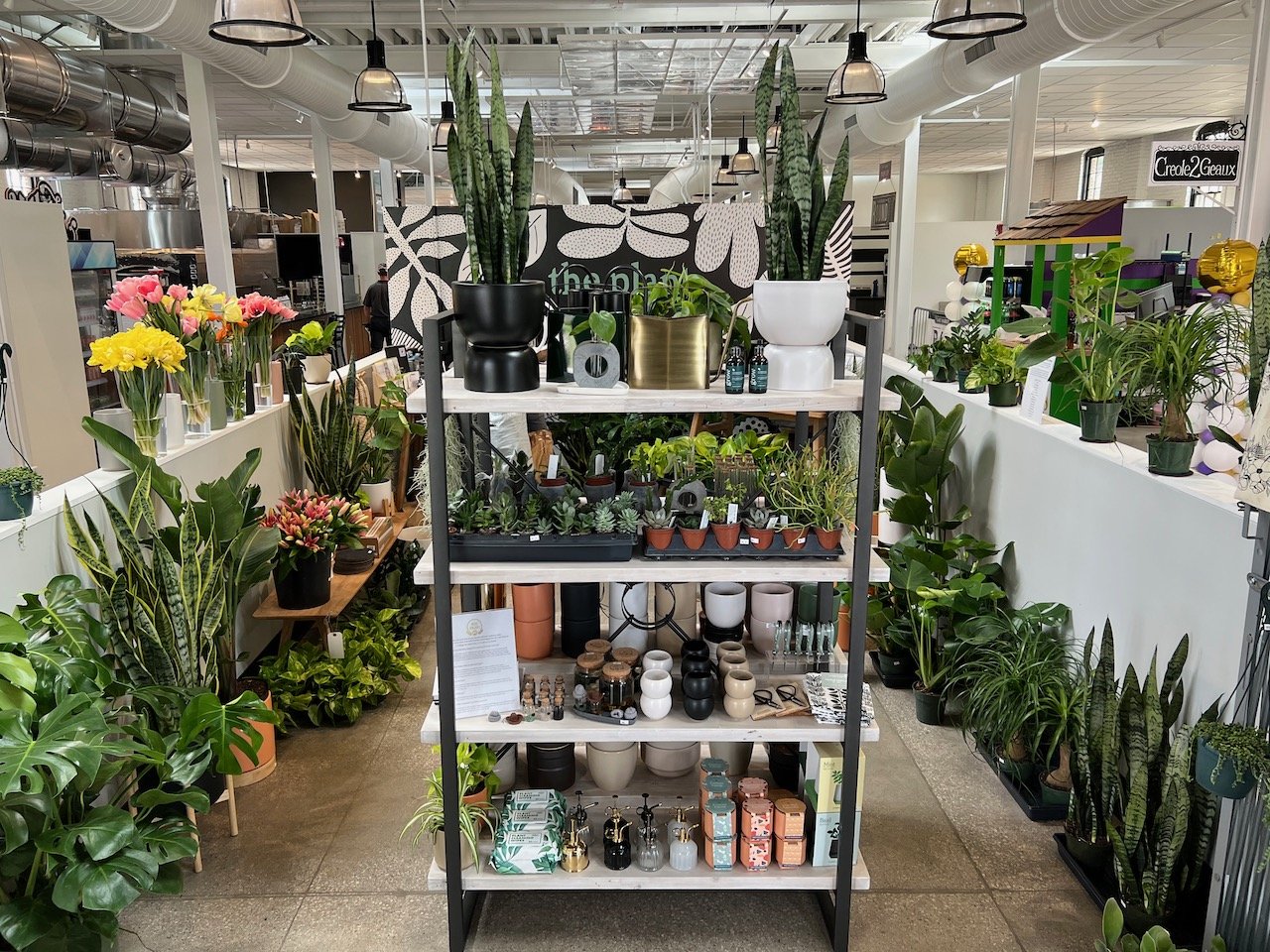 Along the north side of the market also sits Yellow Brick Pizza and the newly opened Just Chicken. At the west end, in the center of the space, you can pick up beautiful greenery and other products from The Plant Gays. 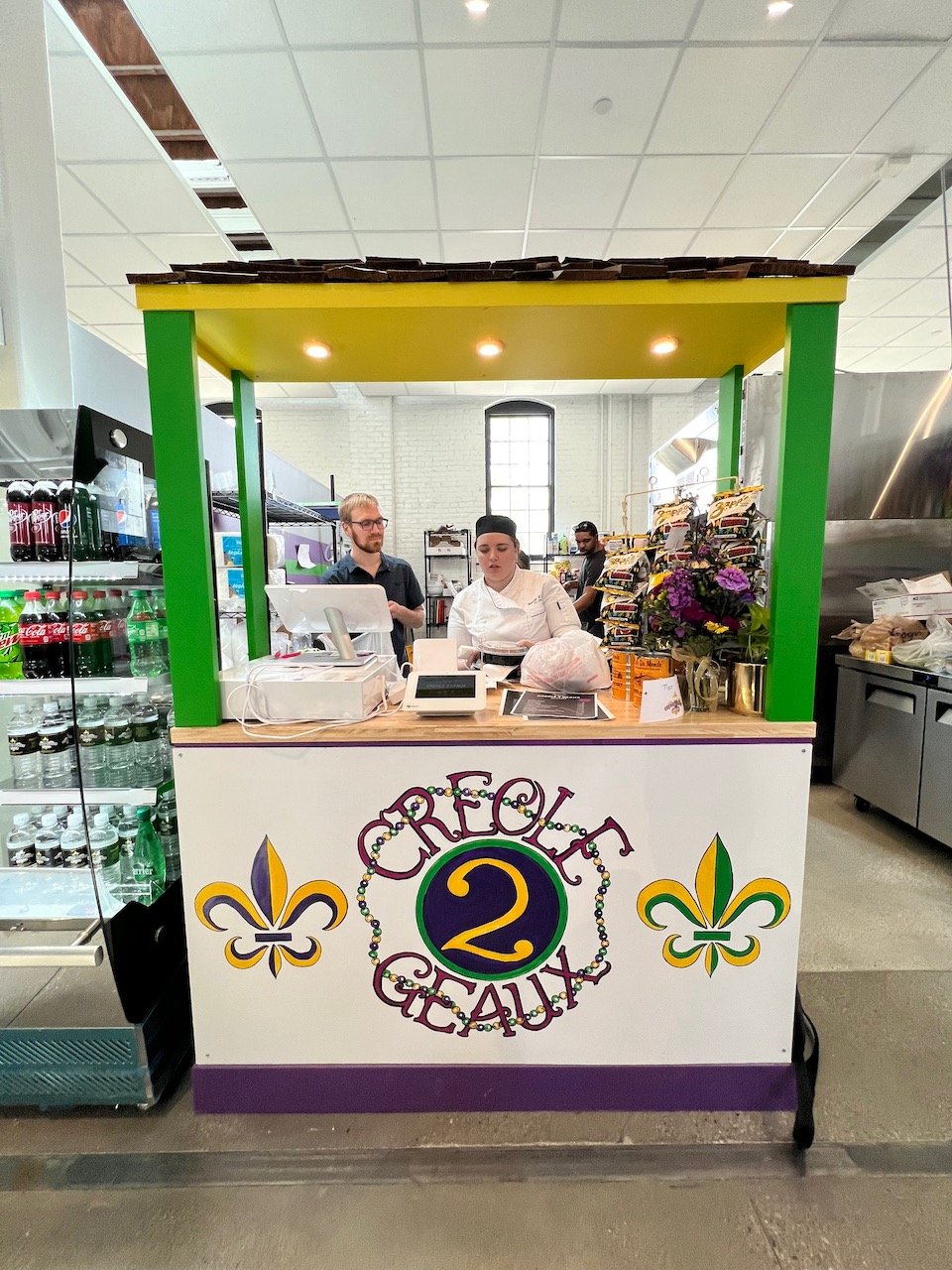 The south wall of the market is lined with American Nut Company, Too Good Eats, and NOLA Daq Shack, which is operated by the folks next door at Creole2Geaux. 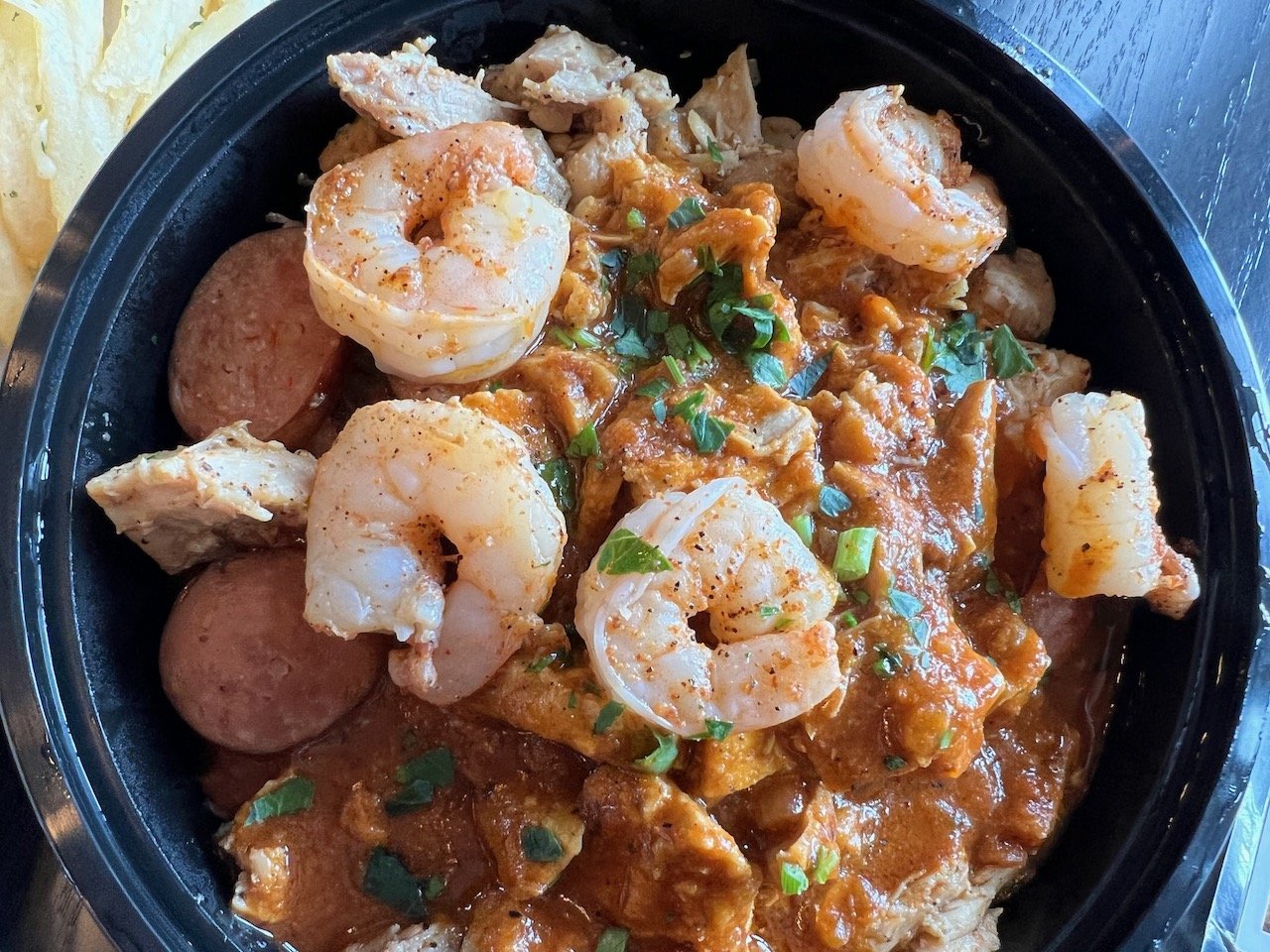 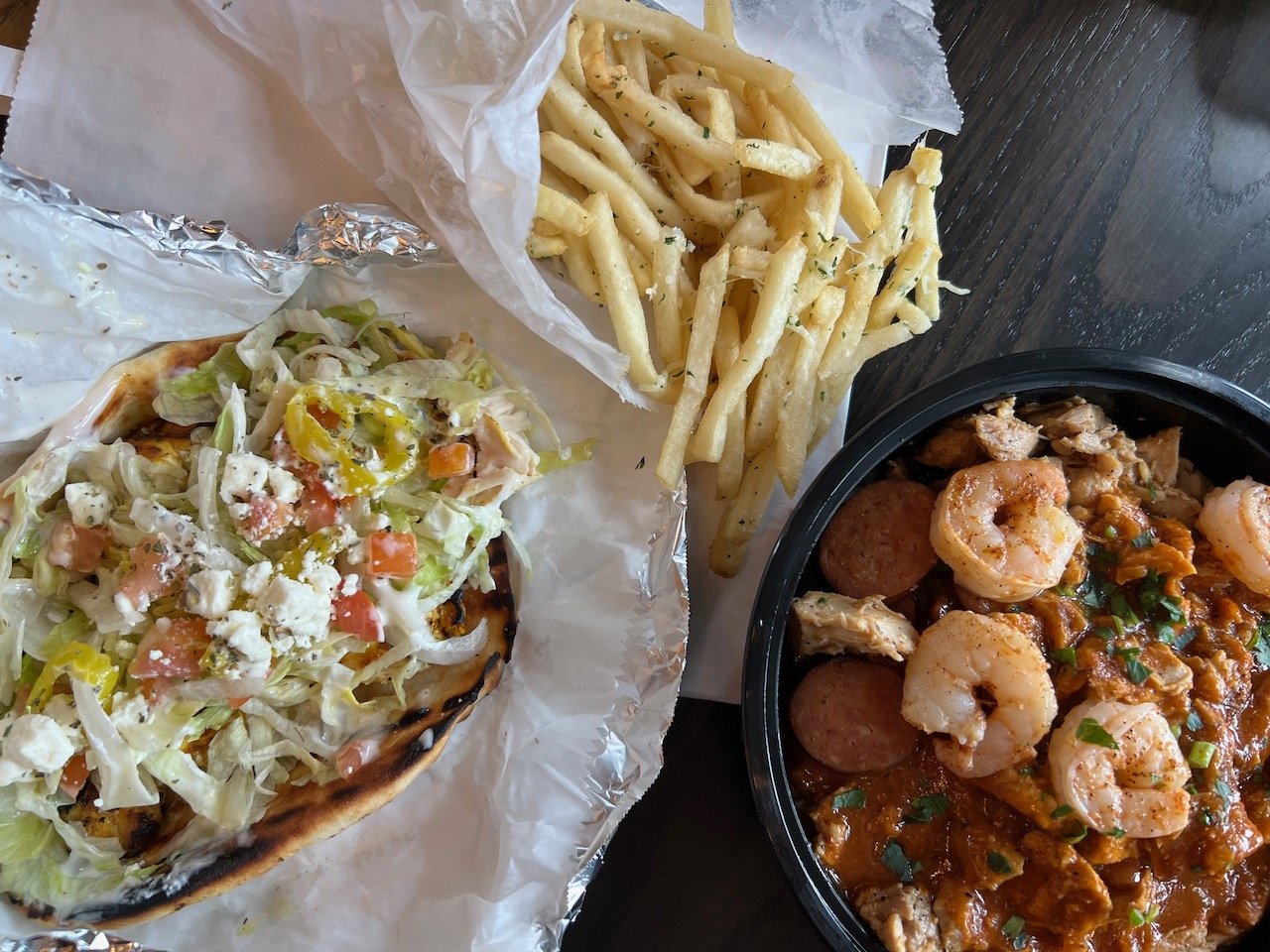 There’s seating all throughout the market, from the beautiful upstairs space to the outdoor patios to collections of tables and chairs in the center of the hall. 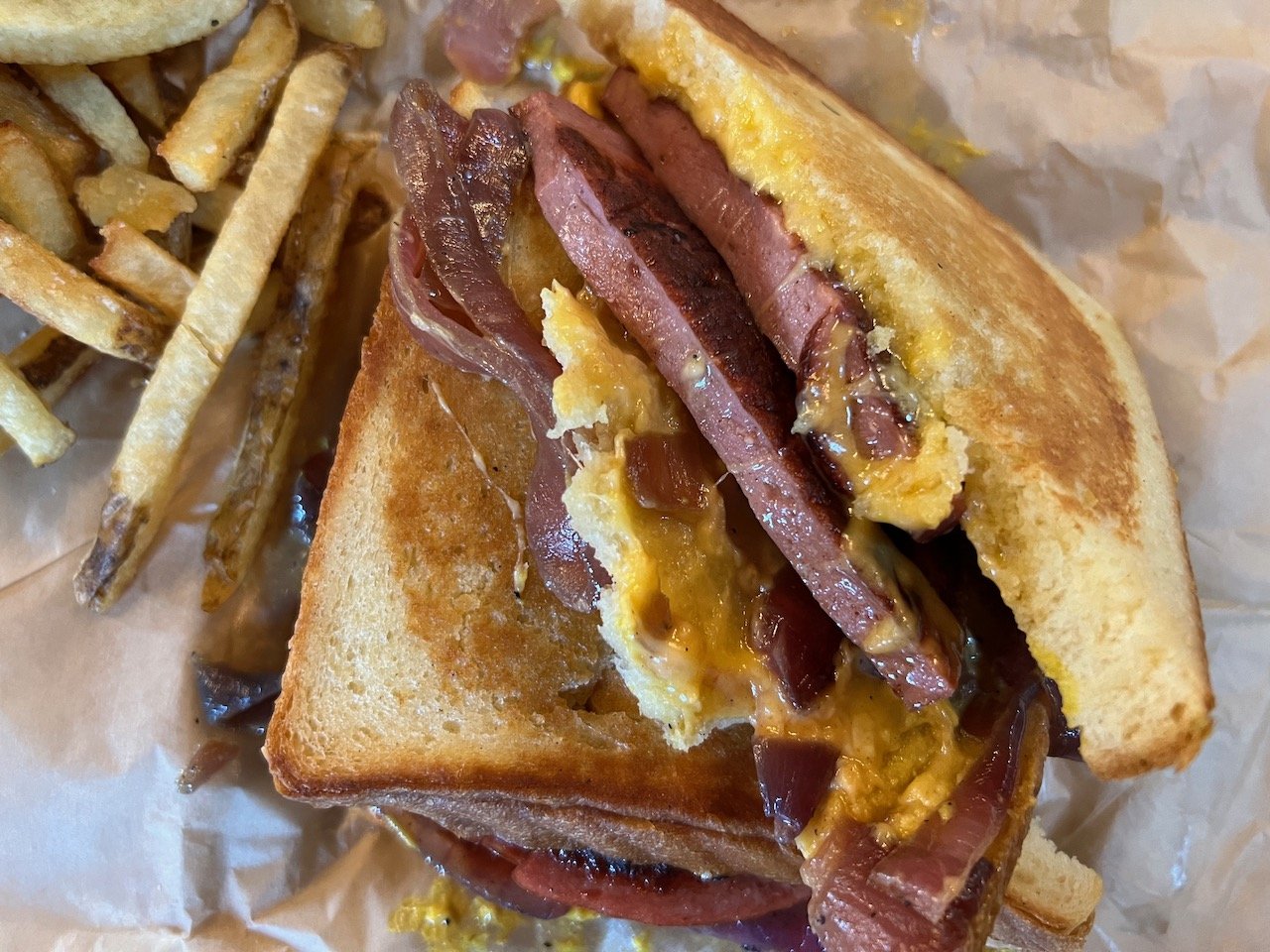 The beauty of these market halls is letting everyone in your party pick out a favorite, then bringing everything back together for a feast. 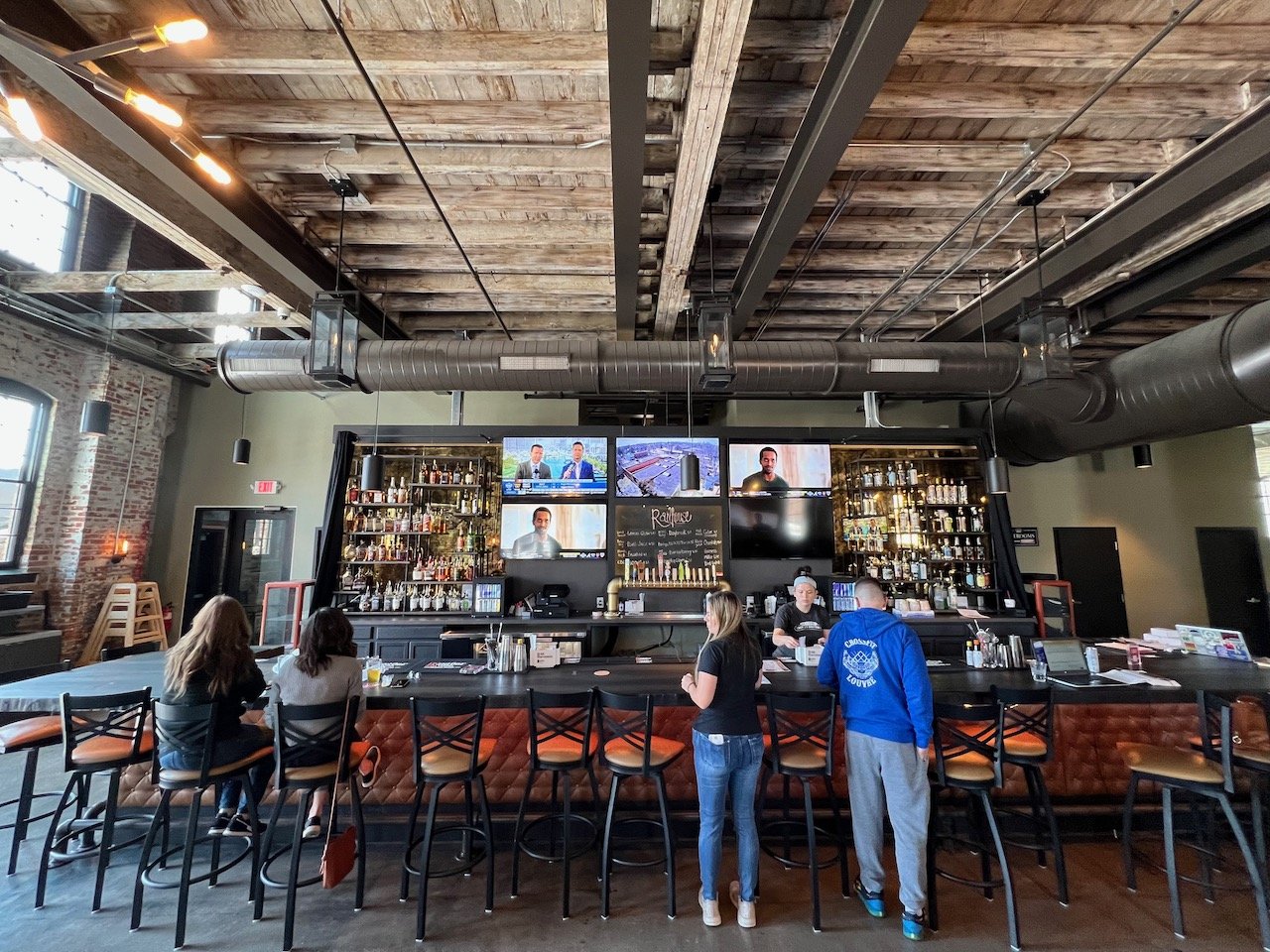 Supplementing the market’s eateries is The Railhouse, a handsome and spacious bar on the eastern end of the market. 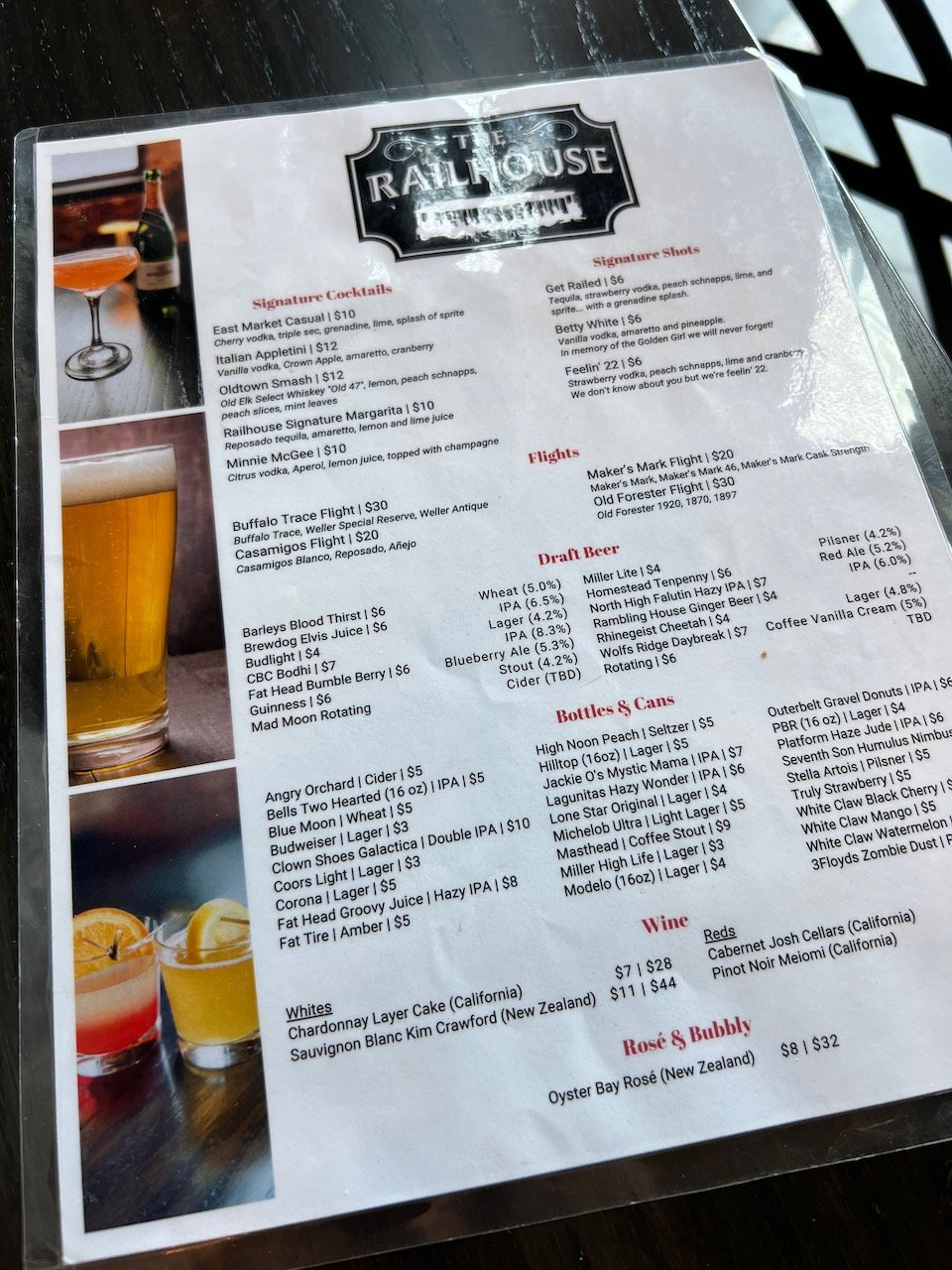 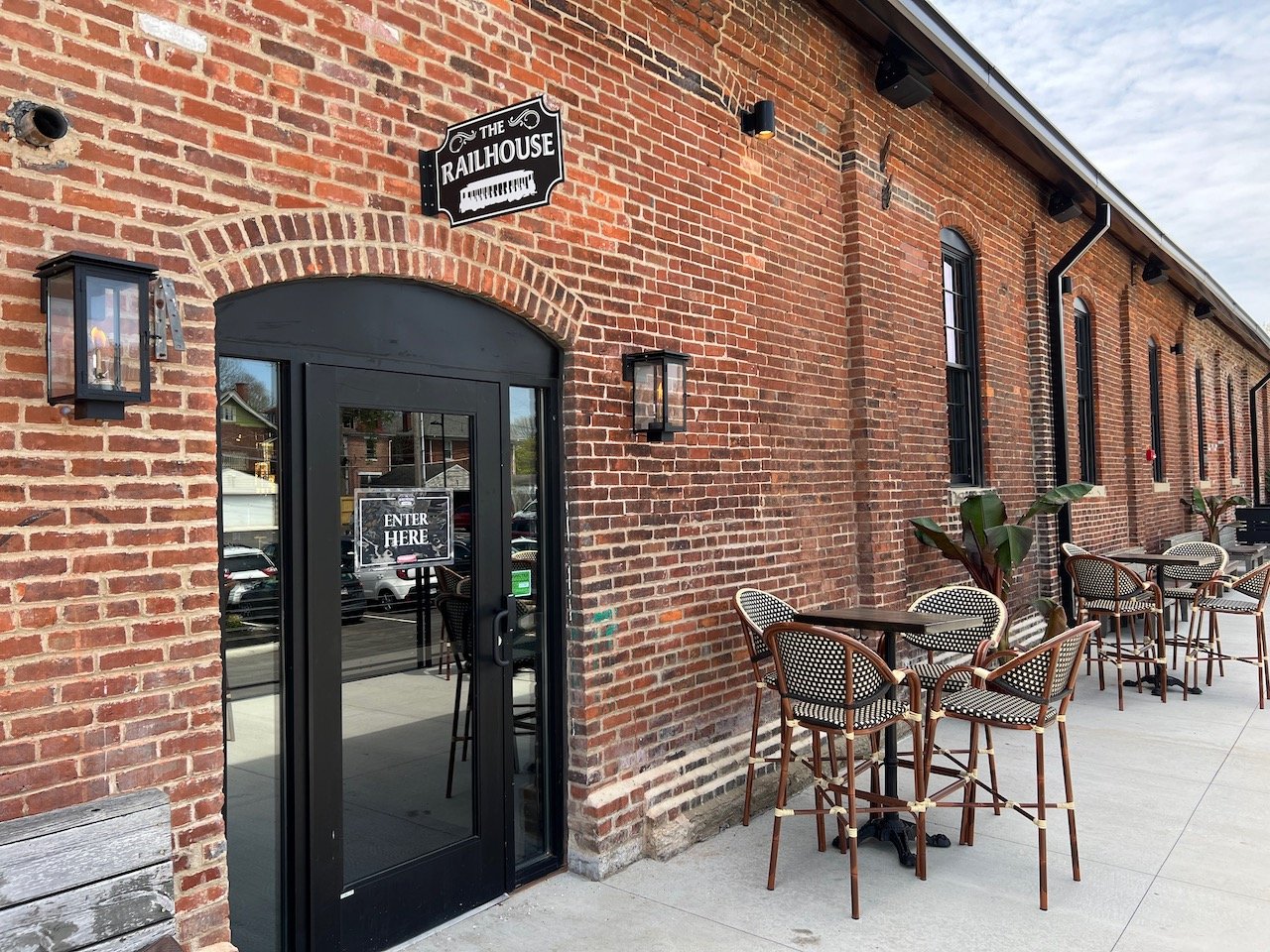 Just outside The Railhouse is a large patio that curves around one corner of the market, offering plenty of al fresco options for food and drinks. 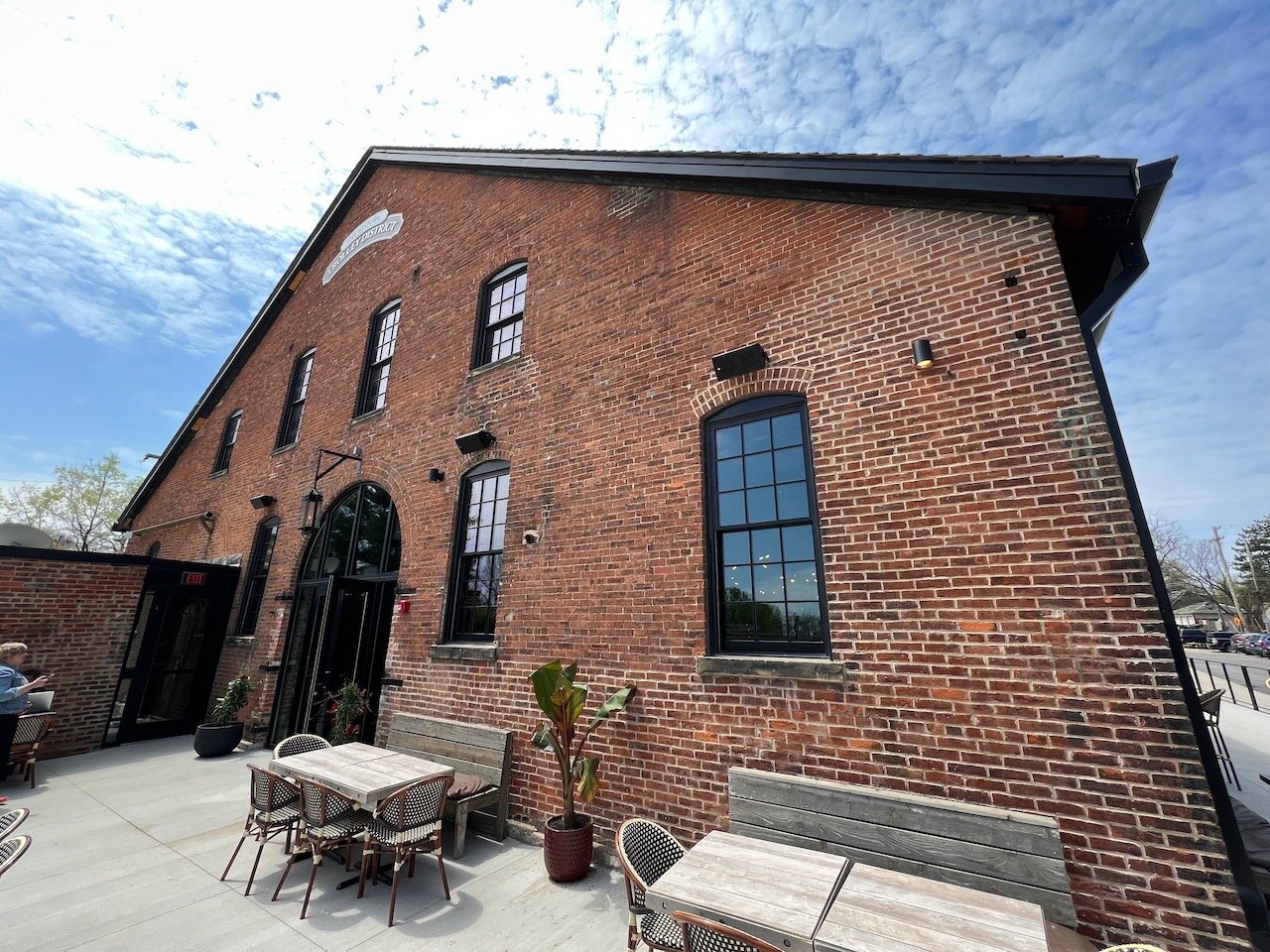 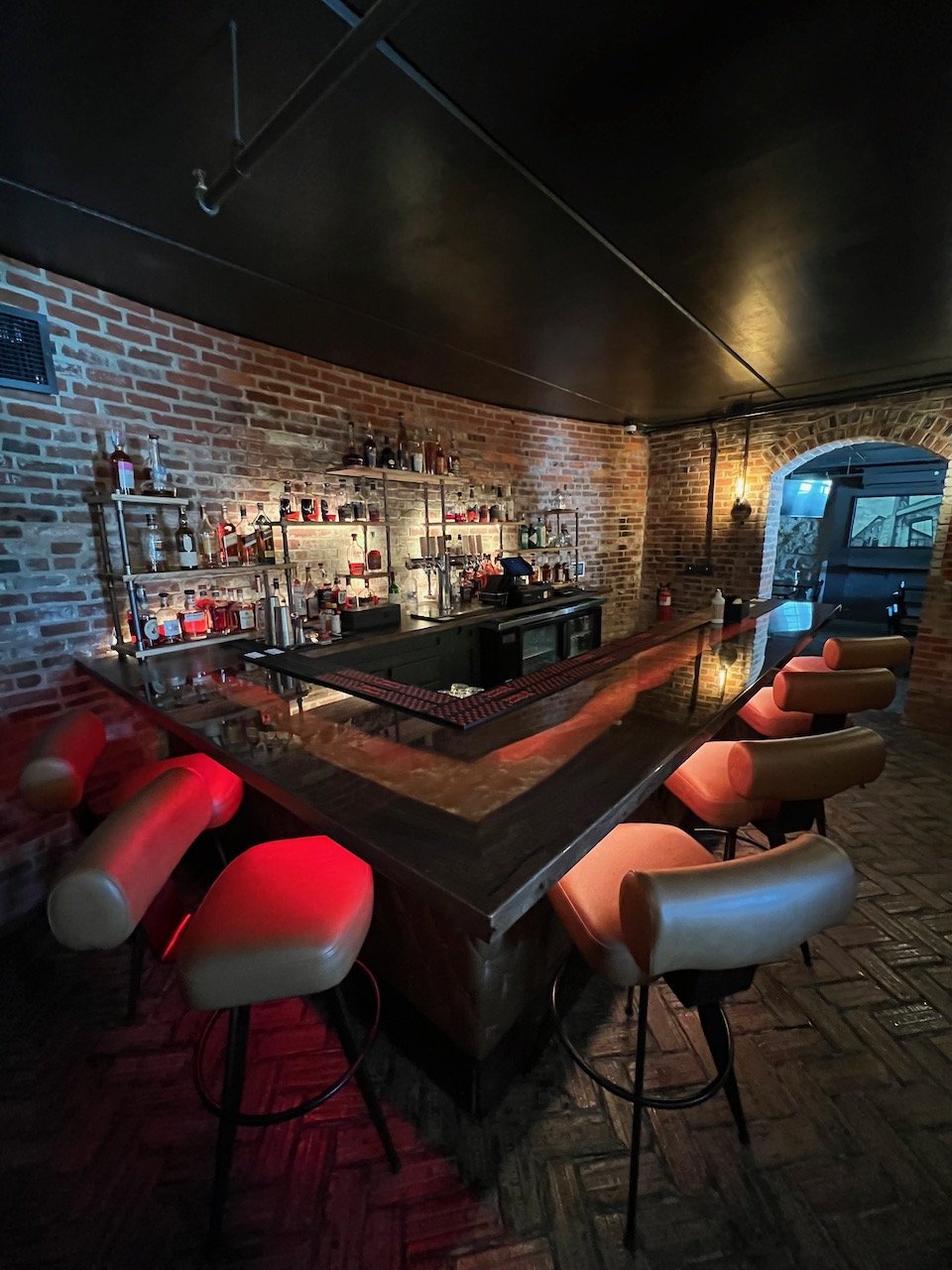 Downstairs below The Railhouse sits a speakeasy called Switch. Accessible through an outside door below the balcony, guests gain entry by getting the day’s password from the bartenders at The Railhouse. 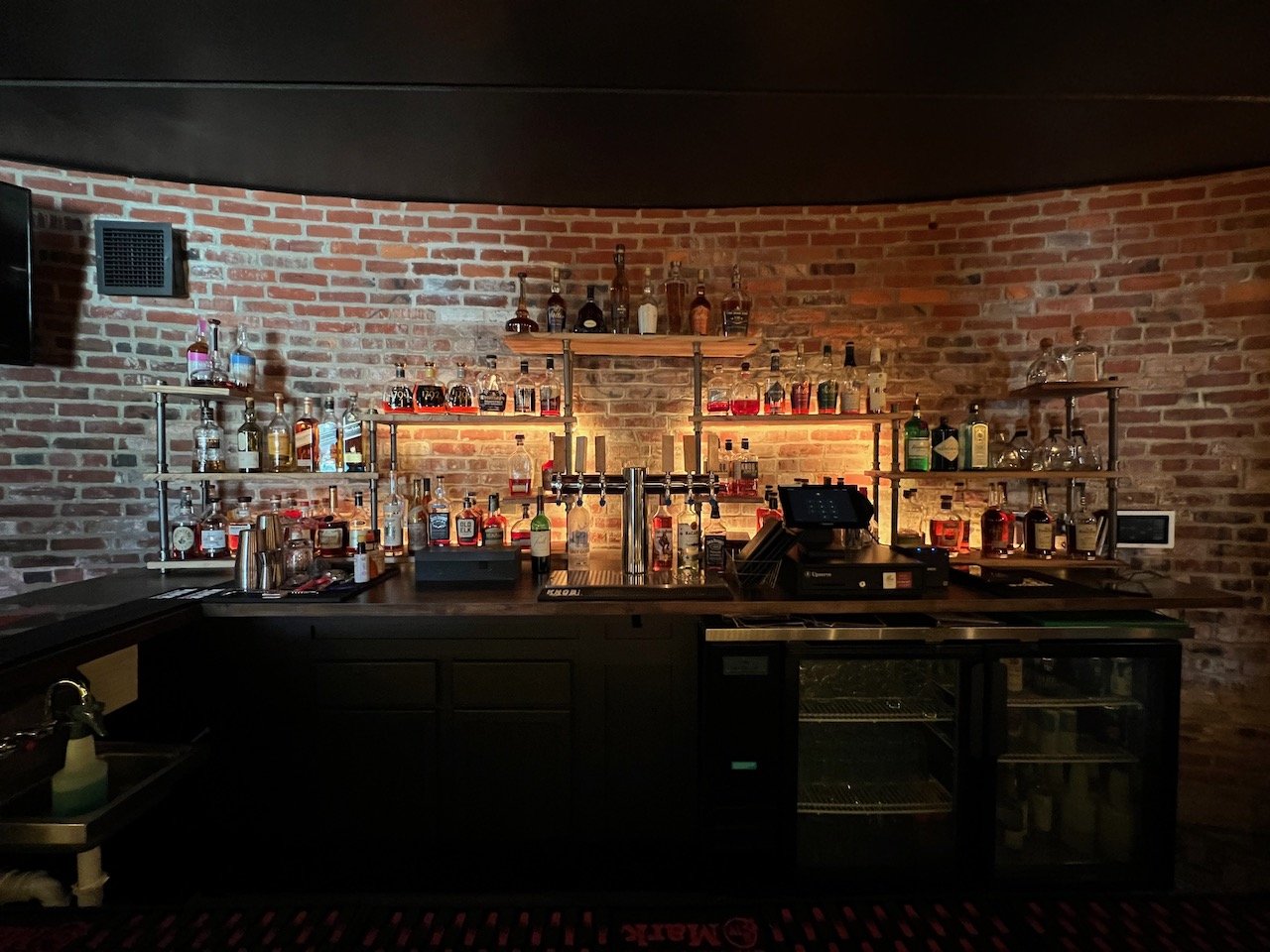 The Switch features a small bar and two adjoining rooms, all cozy and lined with brick. 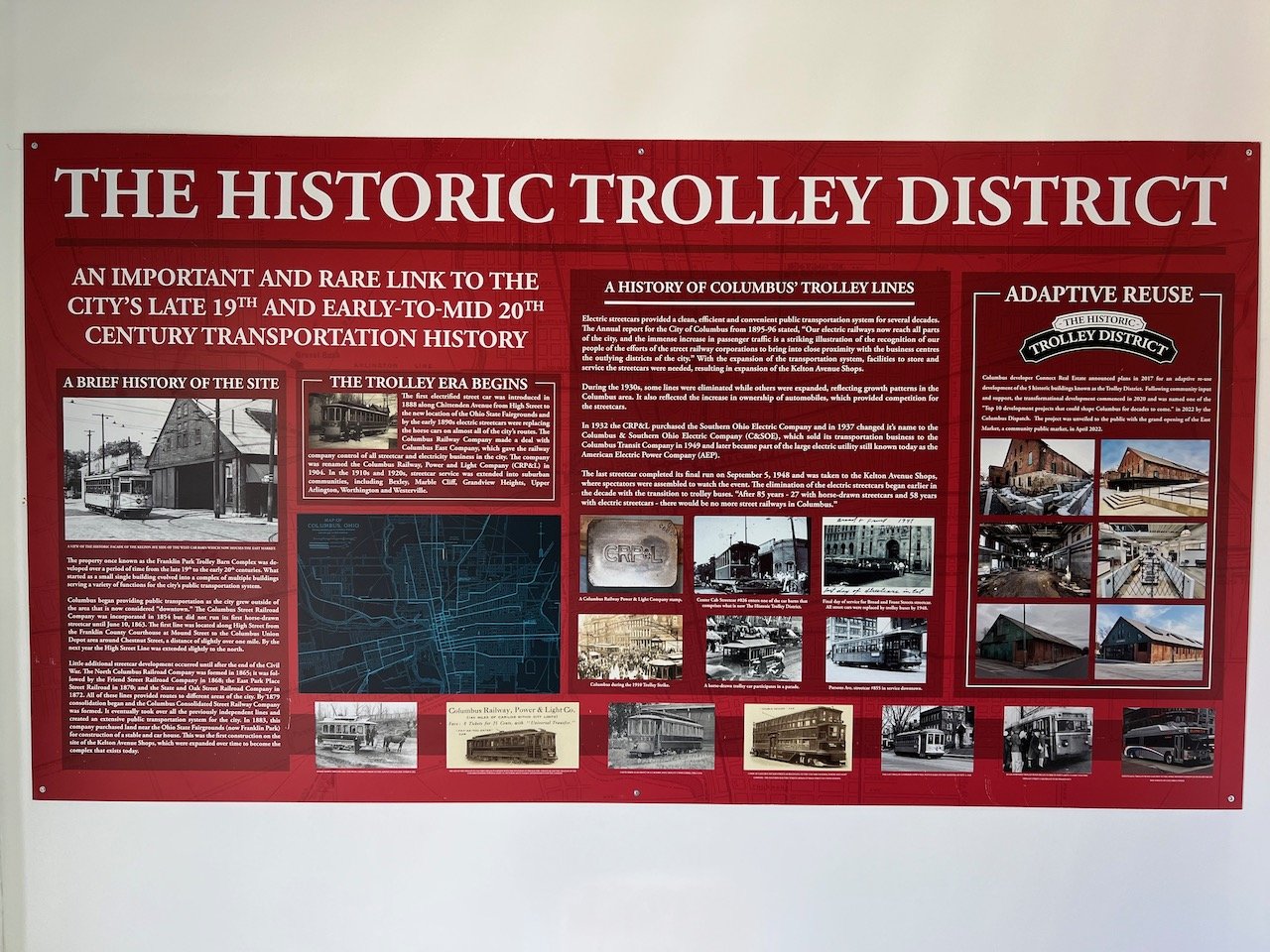 I appreciate how the space pays homage to its origins as a trolley barn, not only through the preservation of the structure but through informative display with maps, images, and descriptions of Columbus’ trolley and streetcar history. 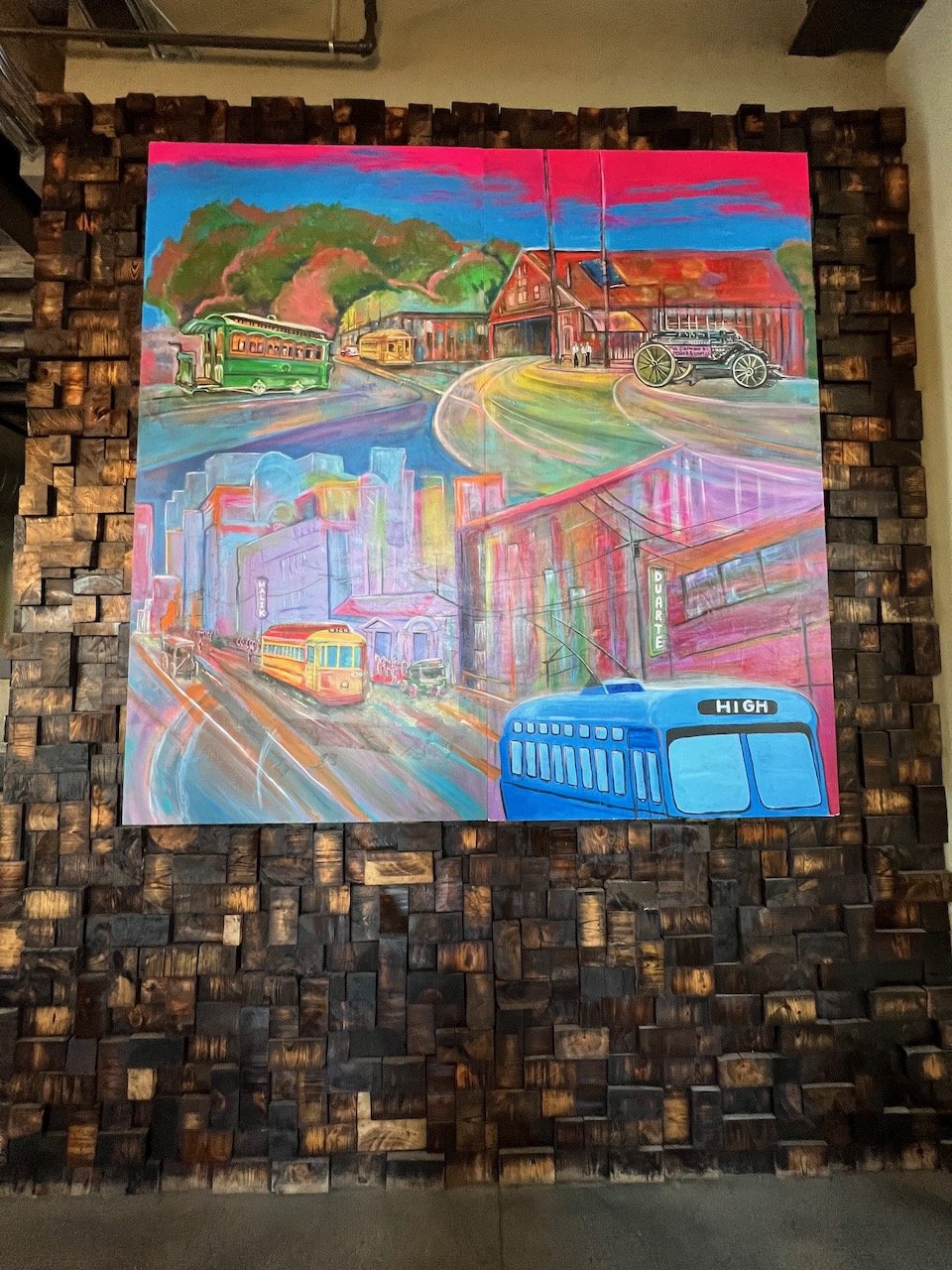 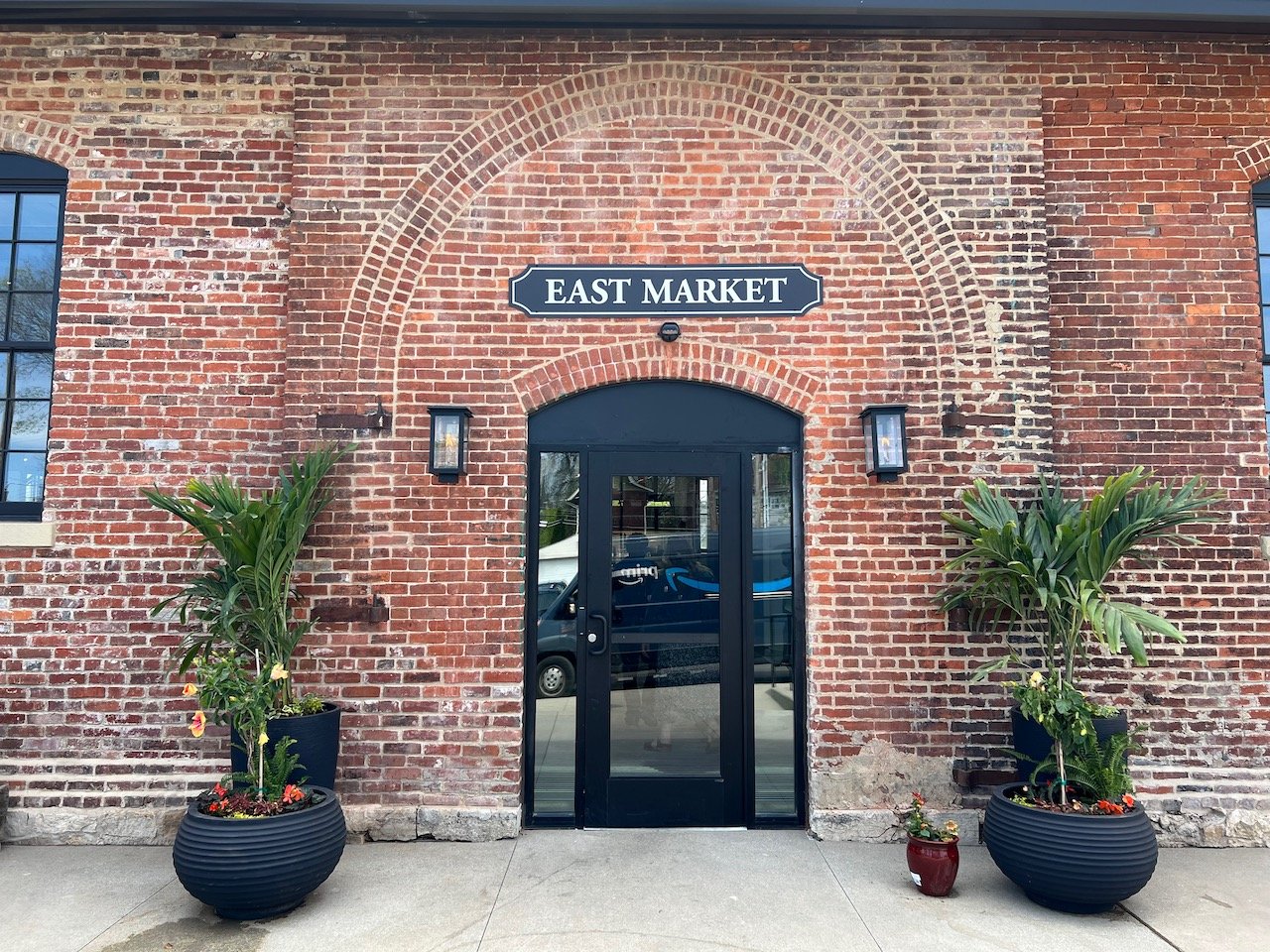 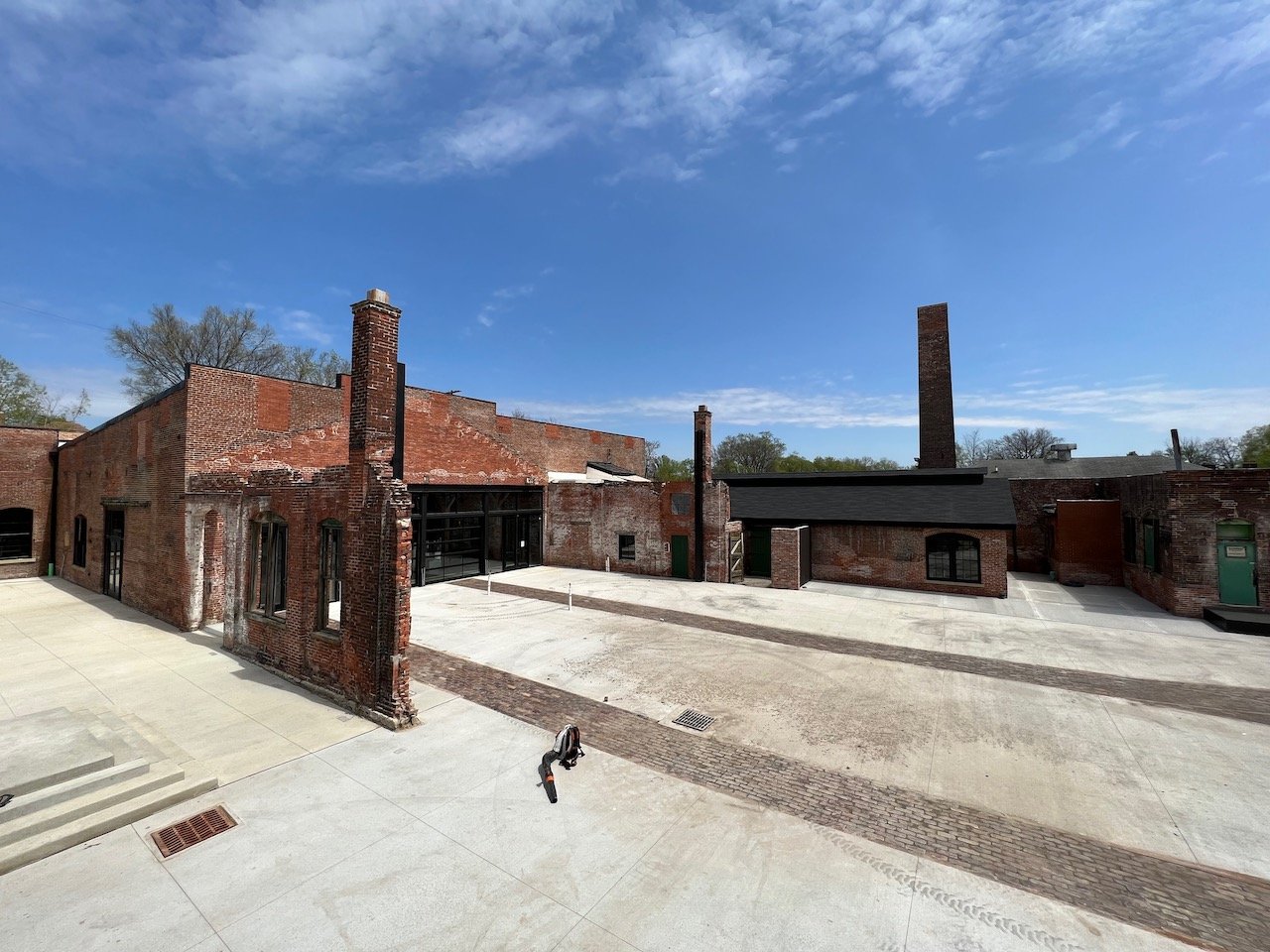 And so much more is coming to the Trolley District campus! Very soon Columbus Brewing Company will open a new beer hall using one of the existing structures. This is sure to be a huge draw for the area.