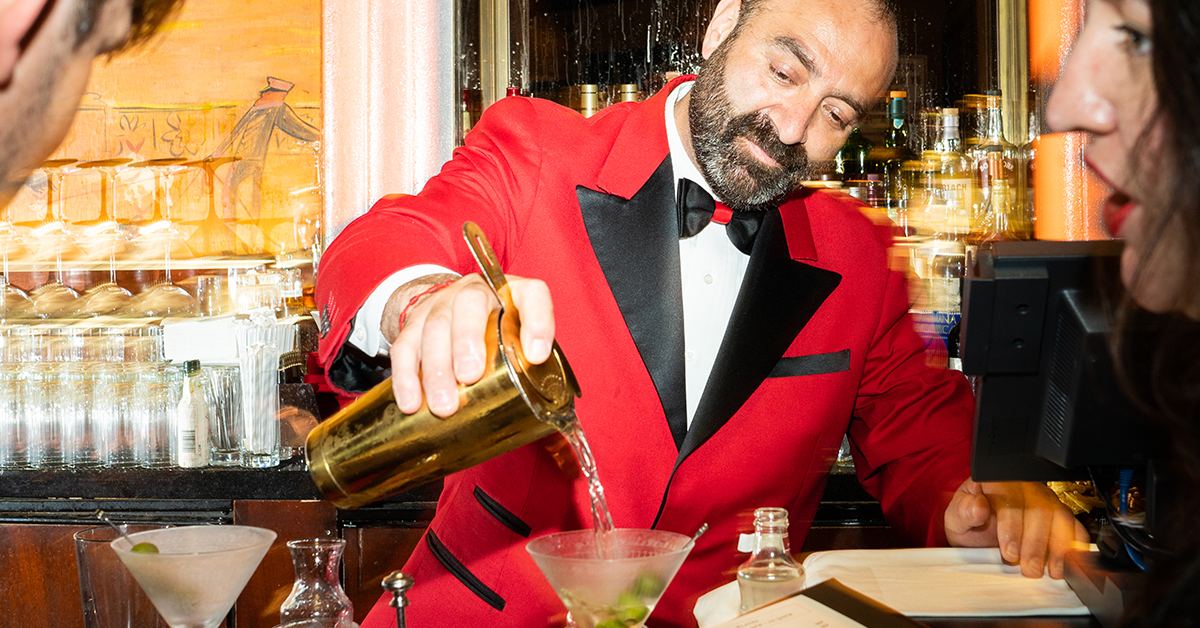 Even on what is evidently a slightly slower-than-average Thursday evening at Bemelmans, the stately bar is a bustling spectacle. Outside the dimly lit lounge tucked inside The Carlyle hotel on New York’s Upper East Side, a line has formed of those determined to enter—a recent phenomenon for the landmark. Inside, among whimsical murals painted by Ludwig Bemelmans of Madeline fame, the well-groomed clientele cradle stiff Martinis, the drink du jour. And buzzing away behind the bar, ensuring the operation runs like a well-oiled machine, is head bartender Luis Serrano.

Emblematic of old New York opulence, with its nightly live entertainment and 24-karat gold leaf–sheathed ceiling, Bemelmans has been serving moneyed locals and A-listers (and more recently, 20-somethings) since it opened in the late 1940s. Serrano can’t claim the superlative of Bemelmans’ longest-tenured bartender; that accolade goes to the late respected Tommy Rowles, who served Elizabeth Taylor and President Harry Truman during his 53 years behind the bar. But with 33 years under his belt, Serrano is a very respectable second.

As these stories often go, it was never Serrano’s plan to be here, donning the establishment’s signature red jacket and overseeing the dispatch of an estimated 1,000 Martinis a night. Born in Ecuador, where his father bred horses, Serrano had planned instead to become a veterinarian. (To this day, he maintains a fondness for animals and has a small farm in Ecuador, where he keeps six Spanish horses.) When he took a trip to New York City in 1989 to visit his sister, who was then working at The Carlyle, he figured he’d spend a few months in the city before resuming school—get a part-time job and maybe save up for a motorcycle. It was then that he inadvertently wound up on the barback-to-bartender track at the hotel. In the ensuing 30-plus years behind the bar at Bemelmans and the adjacent Café Carlyle, Serrano has conceived of hit drinks, such as the festive Carlyle Punch; rubbed elbows with legendary musicians like Bobby Short and Eartha Kitt; and more recently, befriended the influx of young people who’ve flocked to the establishment. Helming one of The Carlyle’s bars “was my first job ever,” says Serrano, “and looks like it’s going to be my last.”

Years in the industry: 33

His go-to drink: Vodka-cranberry with lime and maybe a splash of club soda, or something similar, like a vodka-soda or vodka-tonic

When you first started barbacking at The Carlyle, what about bartending appealed to you?
I liked the way the bartender moved, the way he had interactions with the customers, the way he performed. I was just a barback, and I was young. And I said to myself, I’d rather stay, I’m gonna stay. So I made the decision to stay in New York, and I’ve been here for 33 years now.

What is your philosophy on bartending?
My philosophy as a bartender is very simple: It is to show people respect if you want to be respected, to keep everybody happy. To be nice, to be professional, to keep a distance and to provide service in the best way you can.

You have a lot of A-listers and celebrities come through Bemelmans. Any encounters you’re willing to share?
I have on many, many, many occasions, but I try to reserve names. One I can mention is a gentleman who I will keep in my mind forever—until the last day of my life… Mr. Daniel Moynihan, a senator for New York. I was very young behind the bar, and he used to call me “young man.” He asked me if I was going to vote that year, and I said, “I can’t, I just have a green card.” That was probably in the month of May. And he said, “You know, the election is in November.” I said, “I would love to vote, but I’m not an American citizen.” He said, “I want to help you be an American citizen. By November, you’re going to be voting.” I did it and every time he came in after November, he used to come down to the bar, sit down, have a glass of wine with a club sandwich, and he always used to say, “See, you have to be positive. You didn’t believe what I told you.”

What about memorable performances in the Café Carlyle?
When I started as a bartender, I used to see Bobby Short. That was a memorable guy, an exceptional singer. I’m not going to see somebody like that again. And the same with Eartha Kitt. The way Eartha Kitt used to do her show was something very exceptional: She used to make the public participate in the show. She always mentioned the bartender, the captain, the maître d’. After she finished the show, she’d come to the bar and sit down with us. She used to drink Champagne, Moët & Chandon. Bobby Short used to drink dark rum; he loved it.

What’s your most popular drink these days?
We have a new crowd at the bar, a new generation. It’s mostly Martinis. Martinis are very, very, very popular. In the old days, it used to be Black Russians, Scotch on the rocks, Gin & Tonics, vodka-tonics. Manhattans used to be popular, but not as much as Martinis right now. And now 98 percent of the Martinis are dirty. Ten years ago, I used to have about this much olive juice for the whole night long. [Serrano holds up a pint glass.] Now I need about three of these pitchers. We make, I believe, over a thousand Martinis a night. On weekends, I would say 80 percent of people drink Martinis.

In the past year or so, a lot of New York’s old-school venues have seen a massive uptick in young people, Bemelmans included. What’s that been like?
It’s very good. In the beginning, it used to be people from the neighborhood, very few tourists. It was very, very rare to see young people—mostly, it was 50- and 60-year-old people, very formal, very well-dressed, all that stuff… In the old days, I have to be honest with you, I wasn’t afraid, but there was the sensation that you didn’t want to get too close to the customers because there used to be very serious clientele. Like, you serve a drink, you say, OK? [It’s] fine?, and you step away.

Now the clientele is completely different. Young people are very friendly. They ask you how drinks taste or to make suggestions… They tell jokes to you, they make you feel comfortable. And they ask you questions, like, How long have you been here? Where are you from? What can you suggest to drink? Tell me about the murals on the walls.

It’s fun to make them drinks, to see their reaction and the satisfaction they have. And then they become regulars. I know a lot of young people that I’ve been seeing every week, every two weeks. I see them constantly coming back to The Carlyle. Which is good, which is the point. And I know most of their names and everybody knows my name, and they ask me for my number. Like, look at all these people. [He tilts his phone to show well over a full screen of texts.]

What is, in your opinion, the perfect Martini?
To be honest with you, I like dirty Martinis as well. I never knew what one tasted like until one day I decided to try it. I’m not actually a Martini drinker. When I go out, I like a vodka-soda or a vodka-cranberry. It feels a little too strong, the Martini, until you try it.

I do vodka and I do gin as well. One particular gin that I really love is the Monkey 47 because it’s floral, it’s moody, it’s not that strong. It doesn’t give you that bite. And for vodka—with vodka, if you do a Martini, and you put a little dirty juice in it, you’re not going to be able to see which brand it is. But I’d rather have Grey Goose, that’s a very good vodka.

Did the Espresso Martini trend reach you?
My shift starts at 5 p.m., but I don’t sell any of them until 10. After 10 o’clock, there’s a lot of Espresso Martinis. The way we do it here is with Stoli Vanilla. We use a coffee liqueur, which is a Kahlúa, and fresh espresso. We shake it very well with ice until it gets very foamy, and then after that, we use three coffee beans on top as a garnish. We created something over here called the Midnight Express. It is exactly an Espresso Martini, but it has a few more ingredients in it: Godiva [chocolate liqueur], an apple brandy (which is a Calvados), a little touch of Bailey’s and a few drops of Grand Marnier. Everybody loves it.

In 2015, you told The New York Times you were planning on returning to Ecuador and opening up your own place in the next couple of years. Clearly, you’re still here, but is that still the eventual plan?
I was planning to open some place, just to entertain myself when I retire, but it’s definitely going to be a little hard for me to, after I retire, keep doing the same. I want to do something else. Don’t get me wrong, the routine—it is just very hard. I really want to go back to Ecuador. The temperature is gorgeous—it’s about 65 to 70 degrees, 365 days. I want to be away from the noise, from the pollution. Like I told you, I have my horses back home. They’re still waiting for me there.

One parting question for you: After all these years, are you tired of wearing the red jacket?
The red jackets, I believe, are from around 2000. And to be honest with you, no. I’m very proud to wear my jacket every single day—very proud. And everybody loves this color. 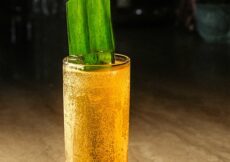 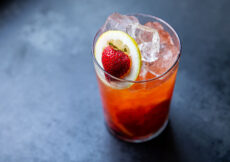 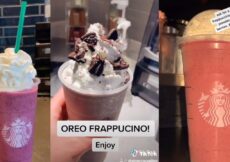 The Best Way to Celebrate the Buckeyes is with Buckeye

Buckle Up, Sports Fans! Here’s Where to Eat and Drink

They said BEST Lunch Ever, so I made them ALL!

What to Serve With Chicken Piccata ( delicious side dishes)

How to Host a Stress-Free Dinner Party

What I eat in a Day to stay fit, healthy

Chicken Grilling Tips for Summer! How to cook chicken on