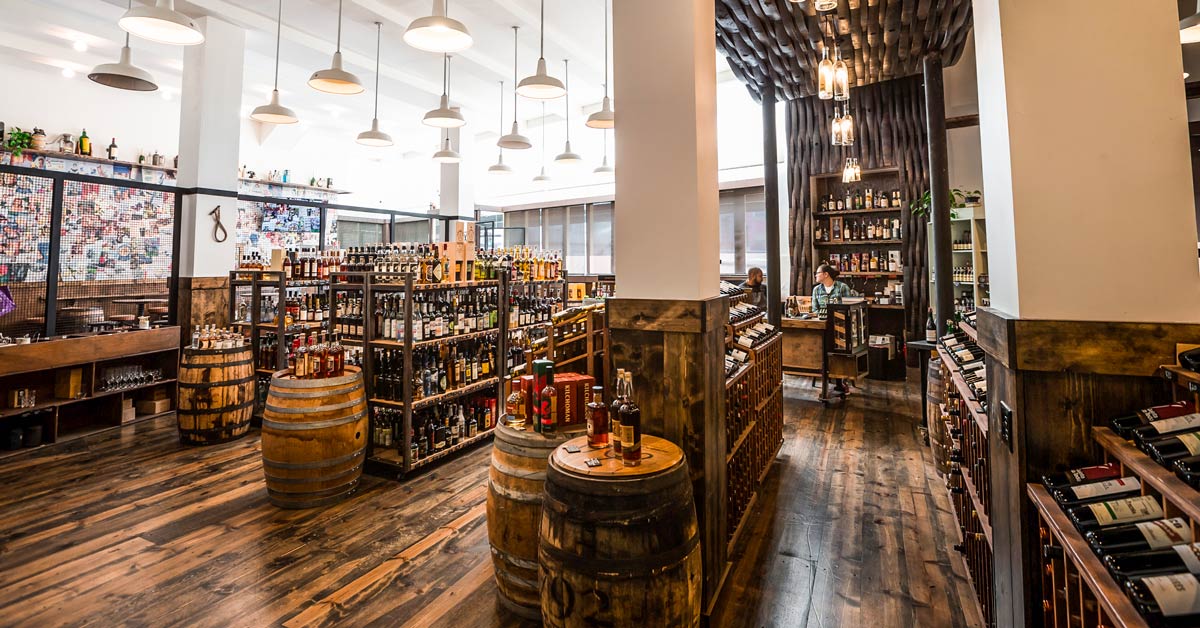 In today’s hype machine–driven landscape, it’s become more challenging than ever to score a genuine unicorn bottle off the store shelves. But at the country’s best retailers, where the spirits knowledge runs deep and the passion even deeper, it’s still possible to discover under-the-radar bottles ready to take up pride of place on your home bar.

While most liquor stores are generalist emporiums, a growing number of independent spirits shops are homing in on specific niches, ideal for those looking to dive a little deeper into a specific category. (Of course, even the specialists tend to carry a selection of other bottles, so if you’re purchasing, say, a bottle of gin from a gin-centric shop, you can also pick up some vermouth for Martinis without making a second stop.)

Meanwhile, even certain larger retailers have developed reputations for their selections within a particular category. What sets these stores apart from other big-box retailers is often their attention to detail in the form of tasting notes, in-store events or other customer education opportunities, all backed by strong industry connections that guarantee access to limited-allocation bottles and exclusive barrel picks.

Whiskey-centric retailers, particularly those focused on American whiskey, seem to dominate the specialty shop game by a wide mile—unsurprising, given the category’s skyrocketing popularity. But vendors devoted to gin, rum, agave, amaro and more are gaining a foothold, too. Here’s a shortlist of shops to seek out for your next special bottle.

NB: Retailers are limited by state laws and may not be able to deliver to every destination.

Moreno’s Liquors | Chicago
This “casa tequilera” was founded in 1977 by Mike Moreno, who envisioned a store that centered Mexican and Latin American spirits, beer and wine. The shop now offers hundreds of tequila and mezcal varieties. Osito’s, a bar in the back run by Moreno’s son, pours much of the same.

Tahona Mercado | San Francisco
Small-batch producers are spotlighted at this bottle shop, with mezcal given particular loving attention. The shop also offers a wide range of agave distillates that don’t bear the mezcal designation, and Mexican spirits such as raicilla, bacanora, comiteco and pox. A “Mexicatessen” sells prepared foods and pantry staples.

Off Premise | Chicago
Although Off Premise started as a broader wine and spirits retailer, “our focus is slowly moving to brandy,” says co-founder Adam Kamin, who also helped conceive The Brandy Advocate, a brandy-focused newsletter penned by Boozehound author Jason Wilson. Small and independent producers stack the list, whether Cognac, Armagnac or eau de vie.

K&L Wine Merchants | San Francisco and Los Angeles
As their name implies, K&L is a wine shop, but their selection of brandy (as well as whiskey) is second to none. They offer exclusive barrel picks for coveted labels—such as L’Encantada Armagnac—and at any given time they have over 100 private selections of whiskey from all over the world, including Belgium and Japan. They offer shipping to select states. 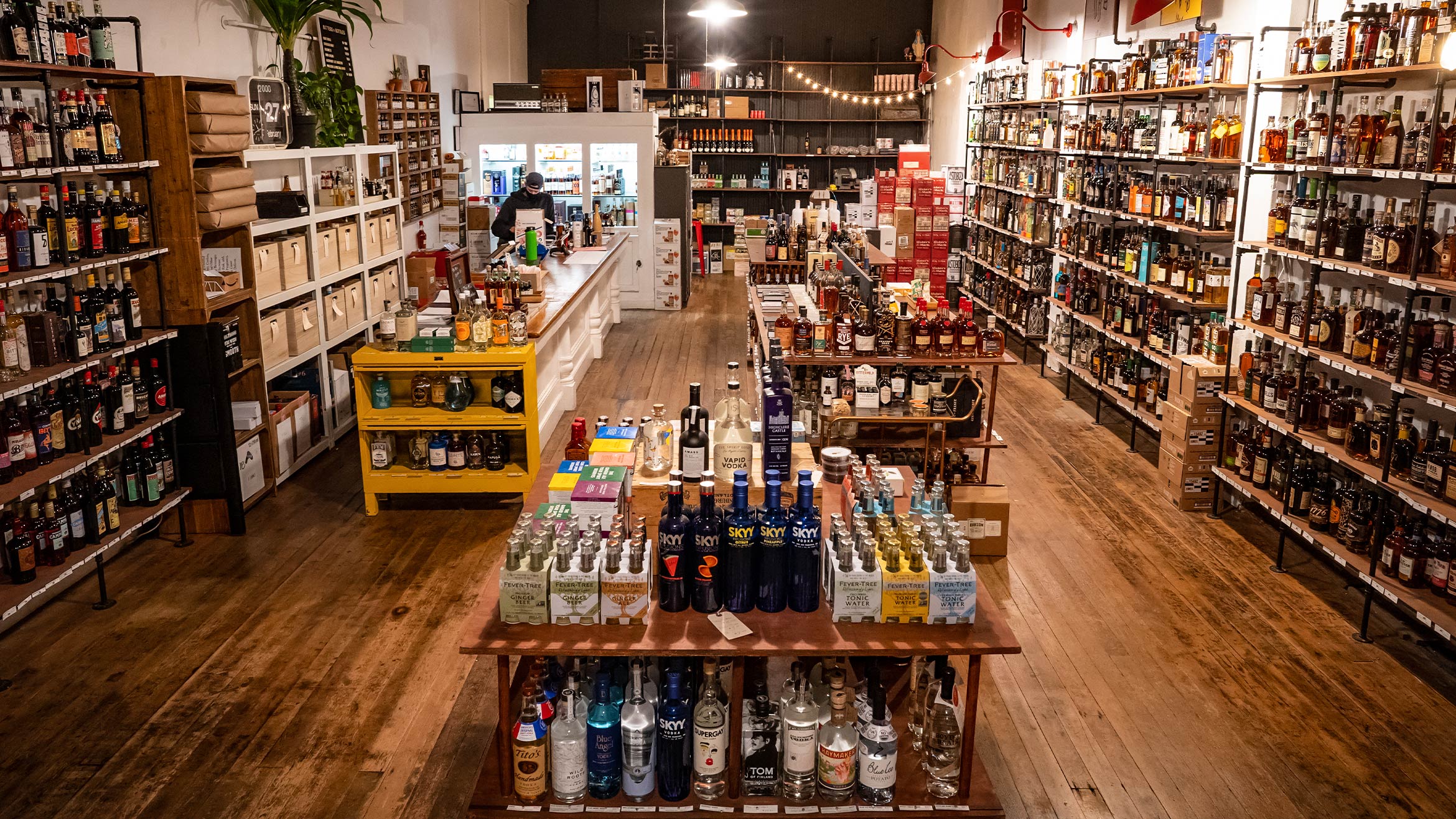 Batch 13 | Washington, D.C.
Although it’s not strictly a gin shop, this purveyor gets the nod from Natasha Bahrami, owner of The Gin Room bar and founder of the Ginworld conference. “George [Grigolia, Batch 13’s owner] has everything,” Bahrami says, “in particular, a massive selection of gins he is very supportive of.”

Bitters & Bottles | San Francisco
Located in South San Francisco, this is another one of Bahrami’s picks, for their “huge collection of gins” and direct-to-consumer shipping. That said, the low-key shop also has fans for its rum, amaro and whiskey selections, as well as its shaggy mascot, Foggy. 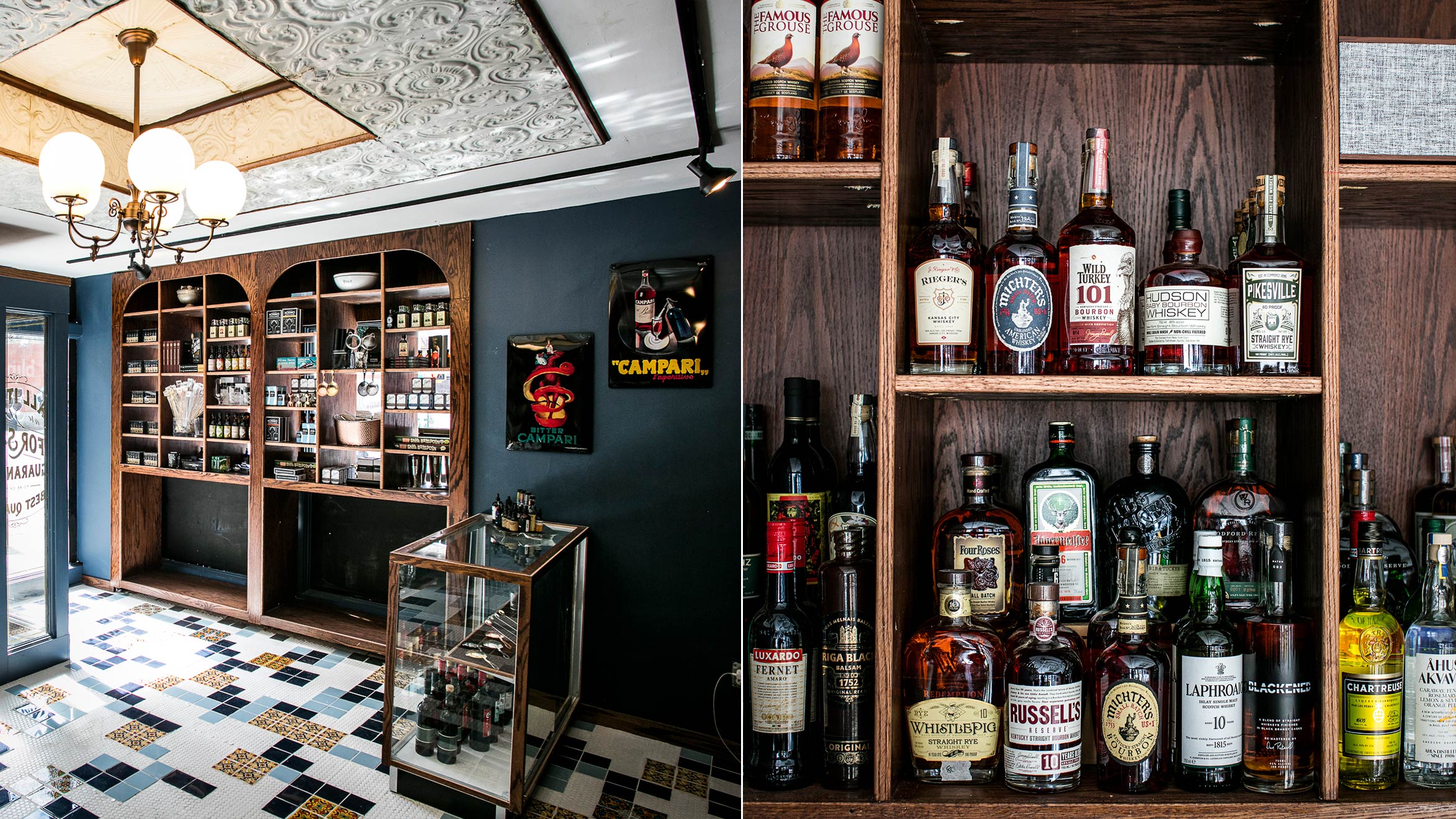 General Store by Amor y Amargo  | New York City
Adjacent to the Amor y Amargo bar, this slip of a shop specializes in bitters, barware and amari—as well as a tightly edited list of vermouths, liqueurs and spirits. Though their amari cannot be shipped outside of New York, bitters, bar tools and merch are fair game.

Amaro Spirits & Wine | Brooklyn, New York
The name of this Park Slope shop says it all: aperitivi, digestivi and other herb-laden liqueurs are the main draw here—including plenty of options from domestic makers alongside Italian mainstays. 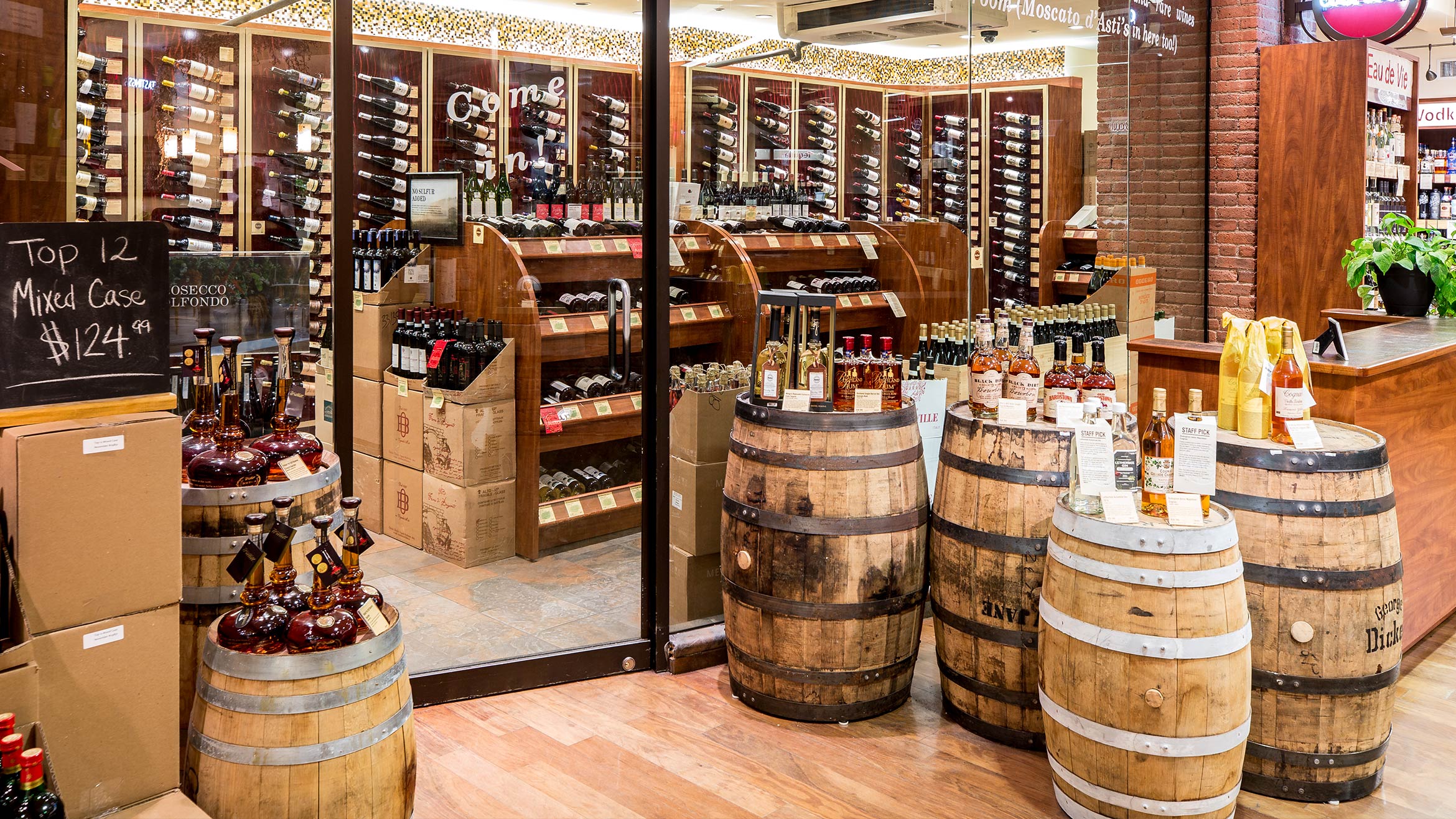 Astor Wines & Spirits | New York City
This sprawling retailer is beloved across every spirits category, but rum expert and author Shannon Mustipher flags its superior rum selection. In addition to providing “informative and helpful” tasting notes posted online and access to limited-allocation bottlings, “the shop has a selection of the vintage and rare section, should you have deep pockets and desire to add a collectible to the backbar,” she notes.

Duke’s Liquor Box | Brooklyn, New York
While not strictly a rum shop, Mustipher gives this Greenpoint spot a vigorous nod: “I have seen bottles here that are not in other shops, or arrive before other retailers catch on or can clear space to bring it in.” The curation of spirits at this small outpost makes it a joy to peruse. 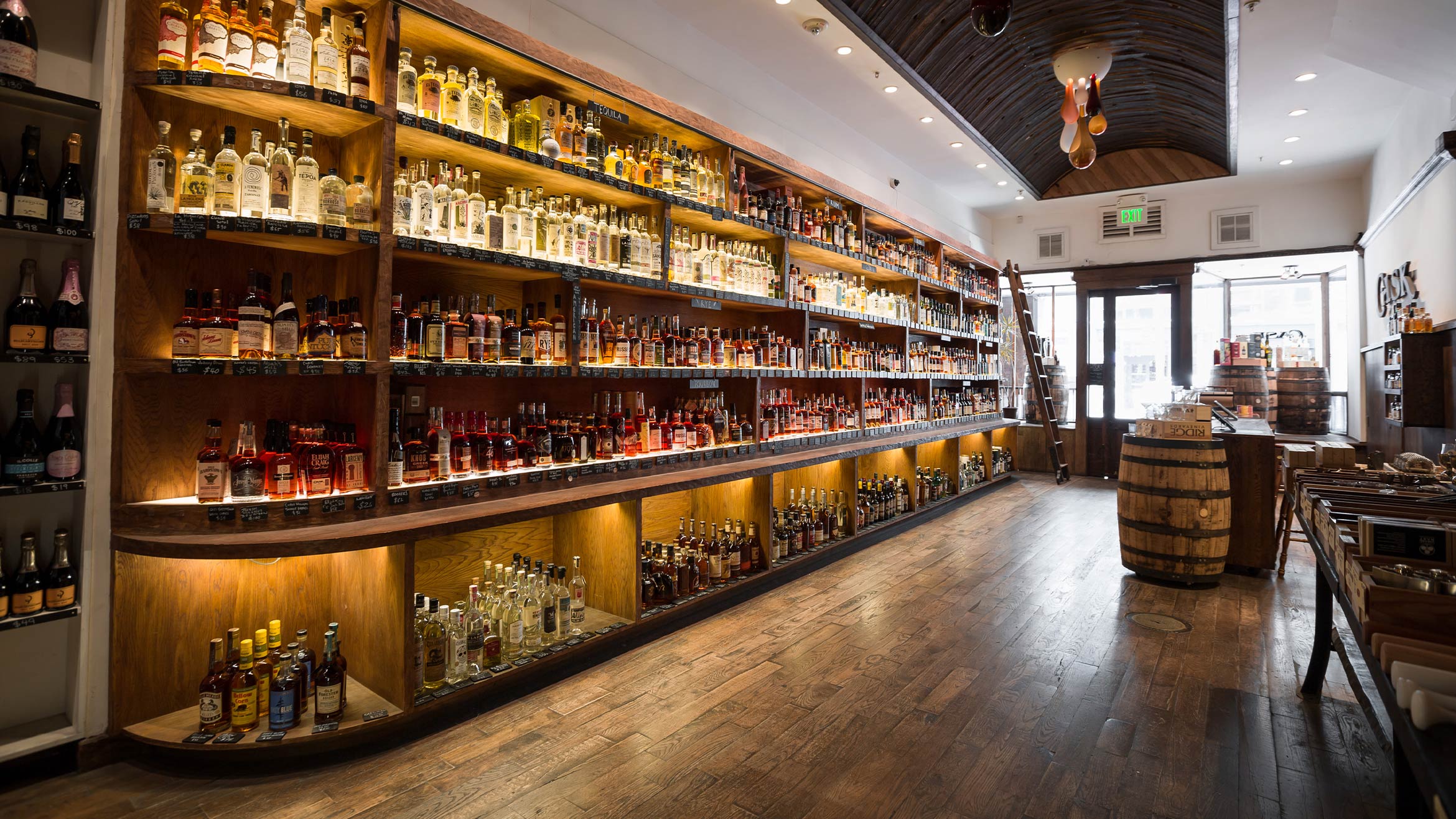 Cask | San Francisco and Berkeley, California
This Bay Area purveyor focuses on small-producer and limited-edition spirits, including subscription clubs for bourbon and single malt Scotch. (Agave spirits are another strong focus, reflecting what the locals drink.)

Justins’ House of Bourbon | Louisville, Kentucky
For those specifically seeking bourbon, it makes sense to look to a retailer located in the heart of bourbon country. With locations in Louisville and Lexington, this insider-y shop, opened in 2018, specializes in rare and vintage finds. For Ryan LeClaire, bar manager at Louisville’s Expo, this is the stop “for the hard-to-find, more rare American whiskeys.”

LeNell’s Beverage Boutique | Birmingham, Alabama
If you’re a whiskey lover of a certain age, you might remember the original LeNell’s in Brooklyn’s Red Hook neighborhood (2003–2009), or perhaps the Red Hook Rye that owner LeNell Camacho Santa Ana (née Smothers) brought in by the barrel when good rye whiskey was hard to find. Now resuscitated in Birmingham, LeNell’s The Sequel continues the whiskey legacy, but it’s also a stronghold for amaro, gin and more.

Westport Whiskey & Wine | Louisville, Kentucky
Another pick from LeClaire, this bourbon country retailer is noted for its private selections exclusive to this location. 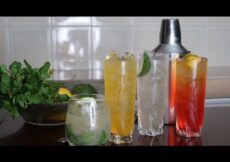 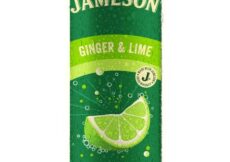 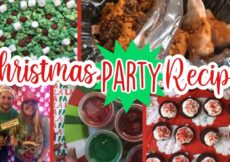