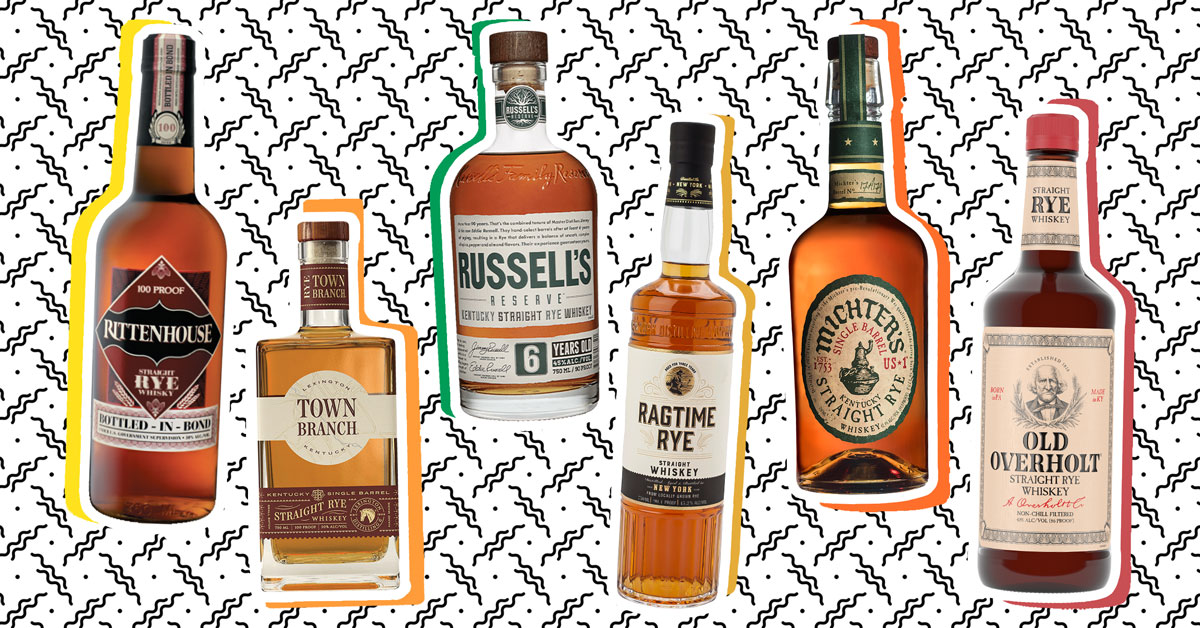 Bourbon may be America’s sweetheart, but before the coronation of Pappy Van Winkle and the birth of the Kentucky Bourbon Trail, there was rye—the rough and rugged whiskey that defined cocktail culture pre-Prohibition.

Rye was the default for Manhattans, Old-Fashioneds, Sazeracs and most other whiskey-based classic cocktails that predated bourbon’s rise to prominence. It was so fashionable that even back in the late 1790s, President George Washington owned a rye distillery at his Mount Vernon property; it was considered one of the biggest producers of rye whiskey in the United States at the time.

Today, the confluence of savvy bartenders reinvigorating rye-based classics and consumers searching for affordable alternatives to bourbon has led to a modern revival of America’s heritage whiskey, causing a wealth of new products to enter the market.

Faced with choice overload, it can be difficult to decipher which expressions lend themselves best to mixing in cocktails, but there are certain characteristics to consider. “When I think of rye, the first thing I think about is spice,” says Matt Colvin, owner and bartender at Hudson, New York’s Lawrence Park. “For me, I want that signature spice profile to shine in a cocktail. Otherwise, why use rye at all?

Beyond that trademark flavor profile, ABV is a critical component of picking the right rye for your cocktail. “Lower-ABV rye whiskeys tend to suit stirred cocktails best—and by low-ABV, I mean around the 45 percent mark,” says Adam Jamie Hussein, head bartender at The NoMad Hotel in London. “This allows for the other, more subtle characteristics in the whiskey to shine through in your mixed drink as it’s receiving minimal dilution compared to shaken drinks.” For shaken cocktails, meanwhile, he looks to ryes closer to 50 percent ABV, as does Jay Sanders, owner of Kansas City–based Drastic Measures. “If I’m making a shaken cocktail with rye whiskey, I’m always going to reach for something higher proof,” says Sanders. “I find that acids and fruits use those high-proof expressions as brighteners for their flavors.”

With the burgeoning market for rye whiskeys showing no signs of slowing down, we tapped rye-loving bartenders from around the world for their go-to bottles for mixing in drinks. Here’s what they had to say.

The rye whiskey recommended by the majority of the surveyed bartenders was Rittenhouse—a time-tested rye produced by Heaven Hill Distillery that’s aged for a minimum of four years. “Rittenhouse has the perfect spice profile, hits that 100-proof sweet spot that stands up in cocktails, and is generally readily available, which is important to consider in today’s American whiskey market,” says Colvin. With notes of honey, caramel, orange peel, cinnamon and nutmeg, and priced around $25 to $28, it ticks all the boxes of a workhorse rye whiskey.

Recommended by Aidan Bowie, bartender at Dead Rabbit in New York; Moe Aljaff, owner of Barcelona’s Two Schmucks; and Sebastian Tollius, beverage director at New York’s Eleven Madison Park, Michter’s US 1 Straight Rye Whiskey has no shortage of fans. At 42.4 percent ABV, the whiskey is subtle, with a typical spice-driven rye flavor profile, complemented with dried fruits, butterscotch, vanilla and other moreish notes that play beautifully in both stirred and shaken drinks.

What makes this whiskey particularly unique is that every bottle comes from a single barrel, as opposed to a blend, resulting in subtle differences from one bottling to the next. “The single barrels used for each Michter’s bottle always make for a fun discovery of slight changes between each other,” says Tollius.

As America’s oldest continuously maintained whiskey brand, and a cult favorite among bartenders, it’s no surprise that Old Overholt is a popular go-to.

Teague notes that the brand recently bumped up the proof, from 80 to 86, making it even more versatile across different styles of cocktails.

Distilled by Kentucky’s Town Branch, which launched in 2012, this bottling is an exemplary expression of the old Maryland-style rye whiskey. Its mash bill consists of 55 percent rye, 30 percent corn and 15 percent malted barley, and is bottled at 100 proof after maturing in oak for four years. Although it’s a relatively new kid on the block, several bartenders felt that its characteristics were perfect for both mixing and sipping.

“Its floral and toasted notes beautifully complement other spirits and ingredients,” notes Lucinda Sterling, managing partner and bartender at New York’s Seaborne and Middle Branch. “It’s at a higher proof, and higher price than your standard well rye, but it’s something I like to serve my favorite guests (and myself).”

David Mor, beverage director at Robert et Fils in Chicago, also enjoys the high proof and flavor profile. “I tend to reach for high-proof ryes for stirred cocktails, and the Town Branch checks that box,” he says. “Bottles like Town Branch do a great job of providing structure, bold characteristics of toasted oak and aromatic spice in drinks, and they also play nicely with other ingredients.”

New Yorkers are no stranger to Ragtime Rye, but in recent years it’s also made its European debut. Made with a rye-heavy mash bill of 72 percent rye, all of which is grown in New York State exclusively for the whiskey, this bottle captures a certain provenance.

“It’s a balance of ebullient rye character and texture with the right amount of barrel contact,” says Rob Krueger, master mixologist at Bar Chrystie at New York’s PUBLIC Hotel, who notes that the Bottled in Bond expression shines in stirred cocktails alongside vermouths, modifiers and bitters. “It’s expressive, chewy, spicy and sweet in the correct ratio.” Try it in a classic Manhattan.

At 45 percent ABV, this age-stated rye whiskey distilled by the Wild Turkey brand received a nod from many bartenders, mostly due to its appeal in spirit-forward serves. “The extra aging in Russell’s 6 Year is clear compared to more youthful and fruity-tasting ryes, which makes it a great spirit for darker style cocktails,” says Tollius.

Mor adds that this expression also plays well in shaken cocktails due to its proof, which makes it more malleable than if it were at 100 proof or higher. “In shaken cocktails, a whiskey’s fruitier notes tend to shine through,” says Mor. “Bottles like Russell’s Reserve 6 Year are delightful go-tos for this style of drink.” 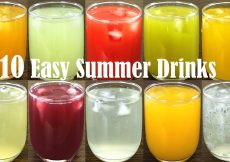 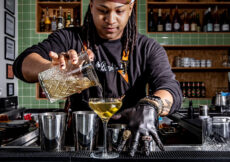 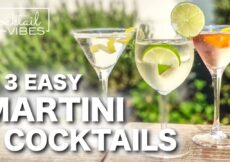