What’s your favorite kind of cake? Mine happens to be carrot cake. Speaking of which, have you tried my healthy carrot cake recipe yet?!

Well, last year I couldn’t stop thinking about how I could transform carrot cake into a healthy version you could enjoy for breakfast. After making my almond butter apple oatmeal cups, peanut butter banana oatmeal cups and pumpkin oatmeal cups, I thought it would be fun to try out a carrot cake baked oatmeal version.

AND OH MY FREAKING ZAC EFRON. These carrot cake oatmeal cups are my new favorite breakfast! They’re hearty, perfectly spiced with cinnamon, include plenty of carrots, applesauce and maple syrup for sweetness, and nuts, raisins and shredded coconut for texture and true carrot cake flavor. Great for kids, too! 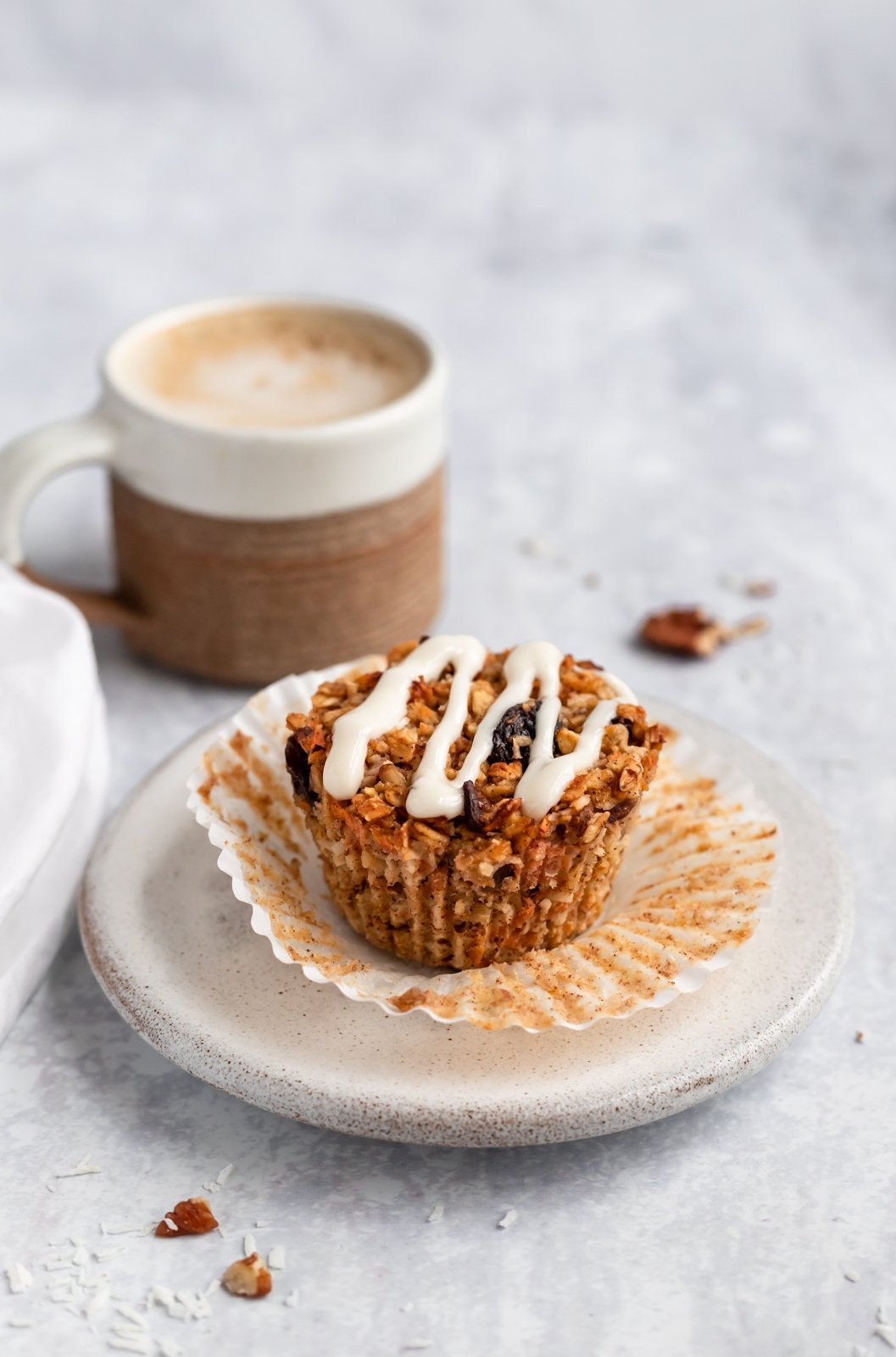 You’re going to LOVE the simple, delicious ingredients in these carrot cake oatmeal cups. They’re the perfect breakfast for kids and adults! Not only are they naturally sweetened, but they’re also great for customizing with fun add-ins. First, here’s what you’ll need: 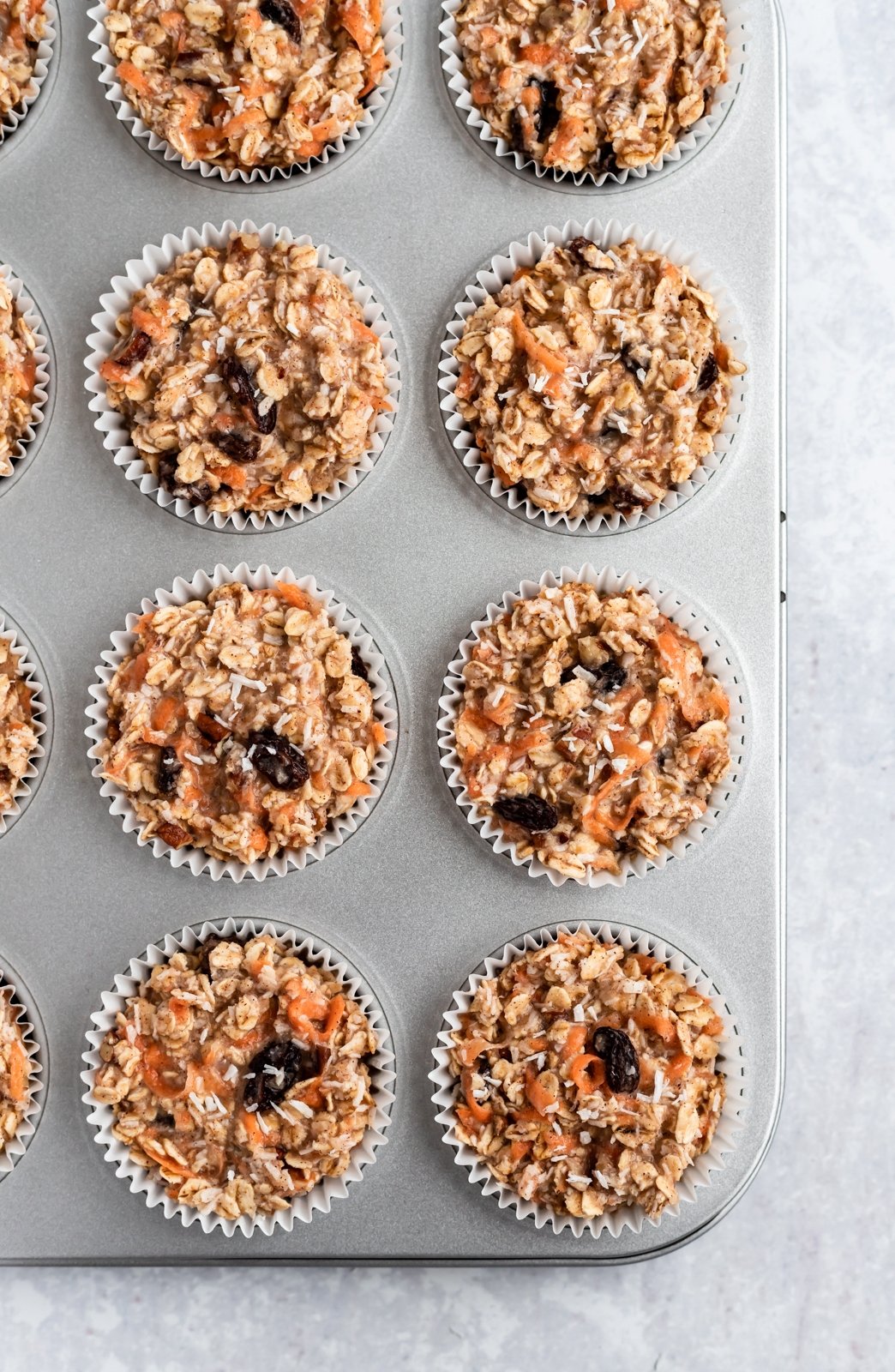 Here are a few ingredient substitutions I can recommend for these carrot cake baked oatmeal cups: 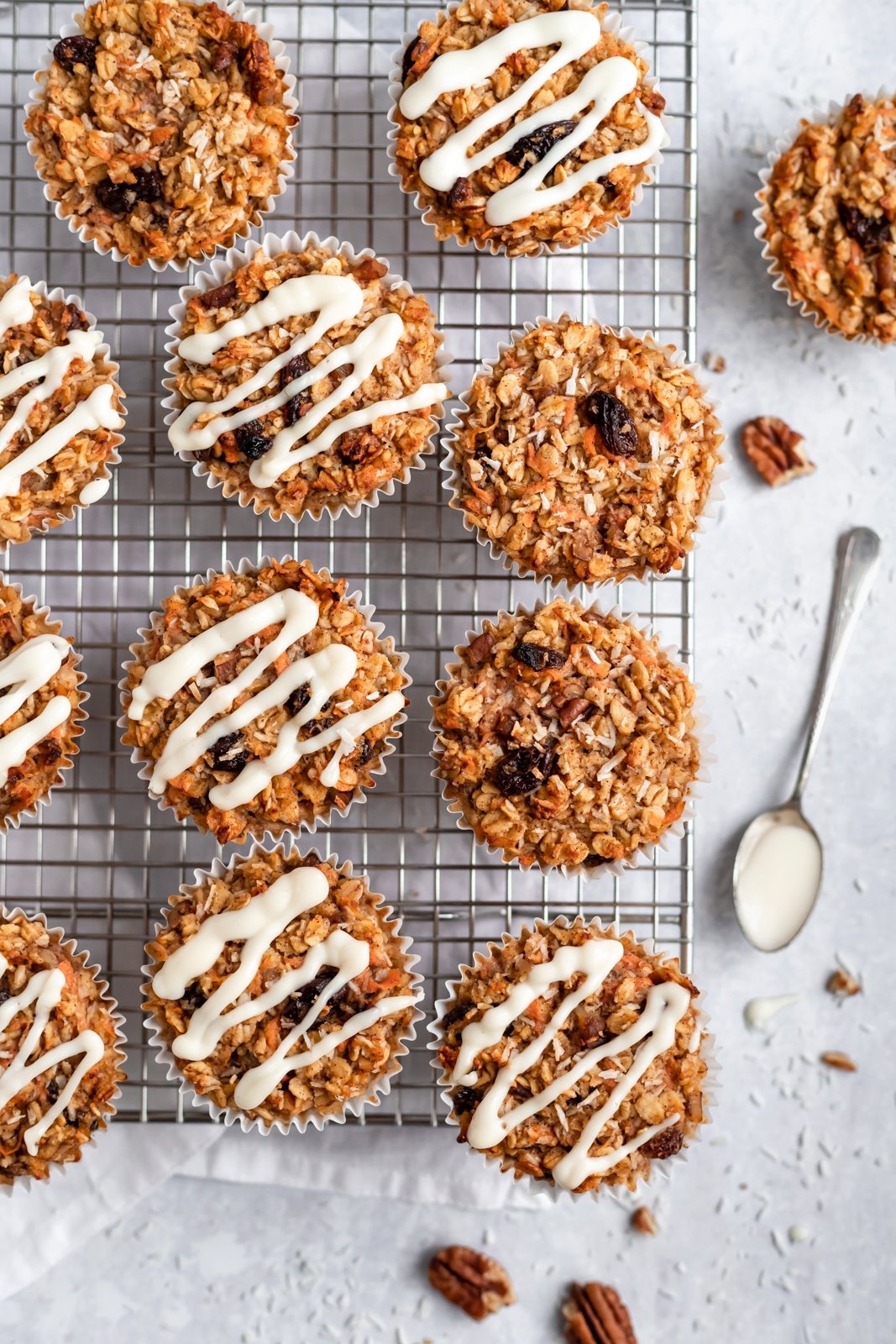 Can I use steel cut or quick oats?

I would not recommend using steel cut or quick oats in these carrot cake baked oatmeal cups because it will change the texture.

Can I make these vegan?

I think a flax egg or a chia egg will work well in this recipe but haven’t tested it to be sure. Learn how to make a flax egg here and let me know in the comments if you give it a try. 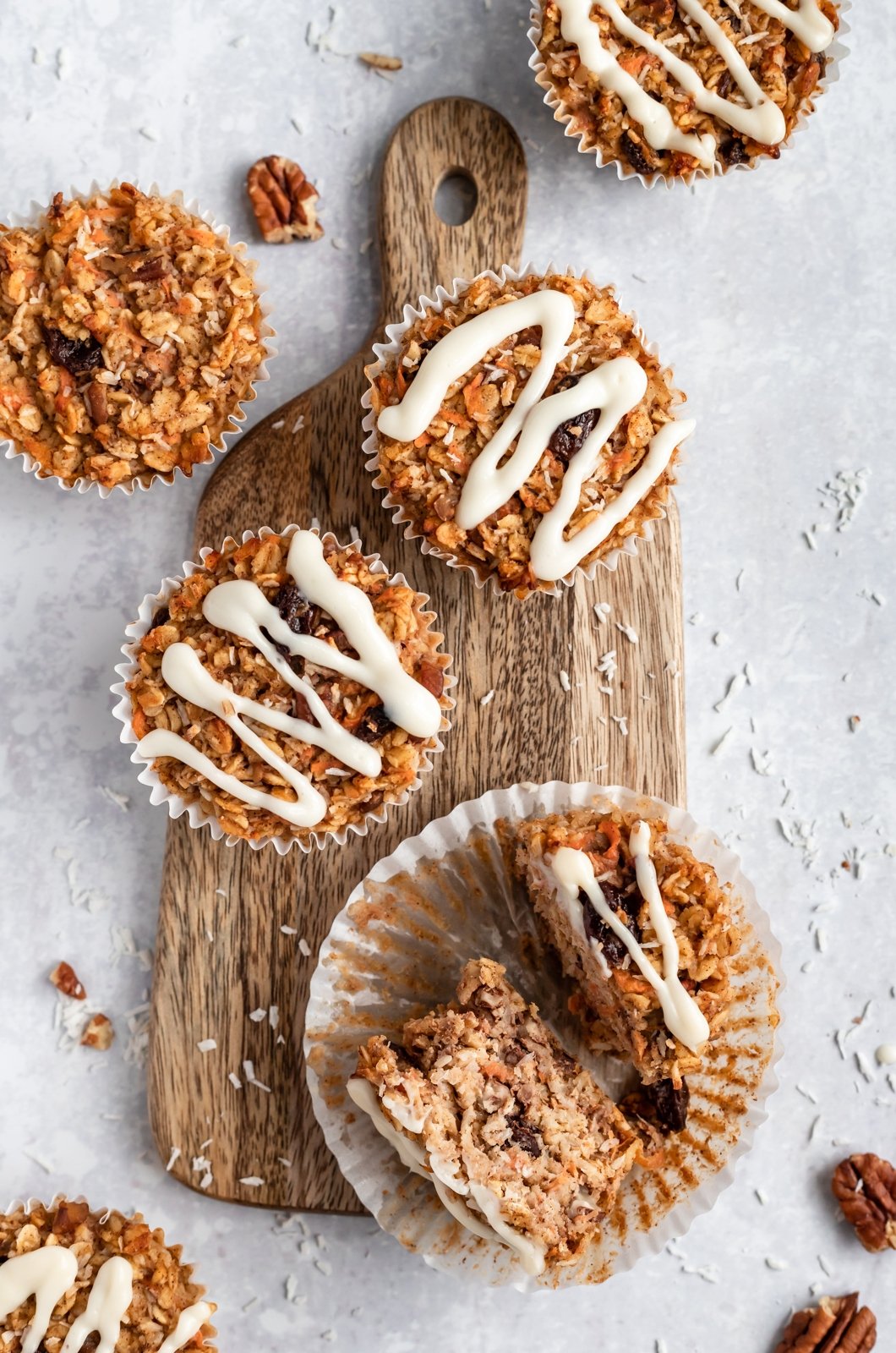 The best part about these oatmeal cups is that they’re easily made in just one bowl. So easy! Here’s how to make them:

It’s easy! Make this a carrot cake oatmeal bake by pouring the batter into a 9×9 inch pan and baking for 40-50 minutes until slightly golden brown on the edges and the center is set. 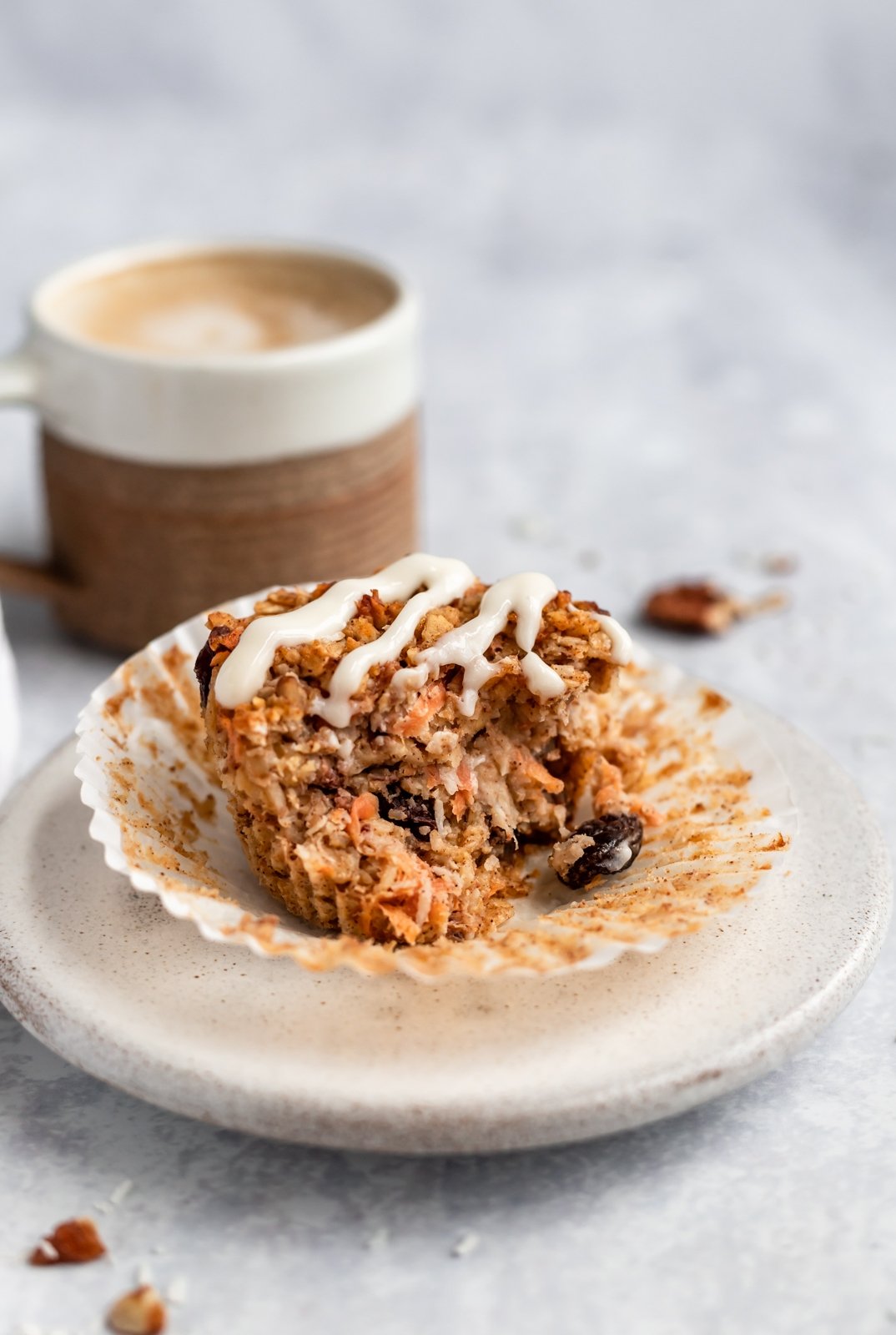 Don’t forget to check out all of our favorite kitchen essentials.

Get all of our amazing carrot cake inspired recipes here!

I hope you love these delicious, easy carrot cake baked oatmeal cups! If you make them I’d love for you to leave a comment and a rating letting me know how you liked them. I greatly appreciate it – xoxo! 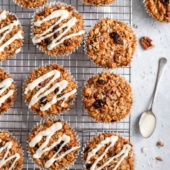 Oatmeal cups should be stored in the fridge and will stay good for 4-5 days.

Even better: freezing baked oatmeal cups is easy. Just allow them to cool completely after baking, then place them in an airtight container or reusable bag and freeze for up to 3 months. When you’re ready to eat them, you can microwave them for 45 seconds-1 minute or until warm.

If you don’t have applesauce, then 1 large ripe mashed banana should do the trick.

Check out the full post to see how to turn these oatmeal cups into regular baked oatmeal in a pan! 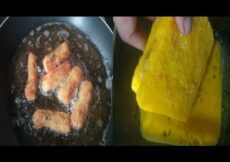