The Mai Tai is the flagship cocktail of all Tiki drinks. Tiki culture is something that became really popular in the 1950’s when people would want to travel to somewhere really exotic, but didn’t exactly want to spend the money or go through the trouble of getting there. So instead they would just go to their local Tiki bar and order a tropical drink that made them feel like they were on the beach.

The Mai Tai has really suffered through some bad mixes and bad recipes over the years, so if you’ve had one before and it wasn’t good it probably wasn’t made properly. But if it is made properly like I’m going to show you how to do, it deserves every ounce of the legendary status that it has. So we’re going to start with two ounces of Jamaican rum.

You can play around with the rums a little bit in the Mai Tai, but I think some really good full-bodied Jamaican rum is a definite must. I’m just going to go with the Jamaican rum by itself now, because I think that’s all you need and you know, the simplest solution is usually the best one, right? So two ounces of the rum and we’re going to do half an ounce of orange Curacao.

Make sure you get a quality orange Curacao, none of that really syrupy Triple sec stuff, that’s not going to do you any favors. Half an ounce of that. No pineapple juice in this drink. I know that’s going to shock you. No OJ either and if anyone ever does that, tell them they’re doing it wrong. Three-quarters ounce of fresh lime juice. I know that you are juicing your lime juice fresh, but just to be sure, you’ve got to do that. Juice those limes. It only takes a couple of minutes.

And now here is the key ingredient to making a true Mai Tai is orgeat, which is almond syrup. It’s not the easiest ingredient to find, but you can get it at coffee stores or gourmet shops. And it’s definitely worth the trouble going to find it, because it makes a fantastic Mai Tai. So just half an ounce of that, and that’s it. So we’re going to shake this and strain it over crushed ice. So I’m going to get my handy ice crank.

Any ice can do, but if you happen to have these on hand, as I happen to today, why not use it. All right, fill that up with ice. These were really popular back in the 50’s. Maybe your parents may have some lying around. Whoa, they’re a little bit of a struggle, but really worth it. Sometimes it’s good to reverse direction around the other way. Yeah, good enough. Okay, let’s get our glass that we have chilling in the freezer.

Now we’re going to shake it not very long, because this ice is going to dilute it a lot, so we just want to mix all the ingredients together, but we don’t want to dilute it too much, because that crushed ice is going to do the trick. Ah, look at that. Tell me that wasn’t worth all that effort I just put into crushing that. Now just a few shakes. I’m on the beach already. Now the garnish. I don’t have an umbrella on hand. I don’t think you need one. But if you want one, knock yourself out.

I’m just going to put a little lime wheel on there. I happen to have some mint here actually. The garnish is something that really adds some authenticity to your cocktail, and if you’re making it for people, something they really notice and appreciate. Definitely want a straw with this one. In Tahitian, Mai Tai means out of this world, and I think they’re pretty right about that. And that’s how you make a classic Mai Tai. 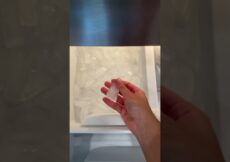 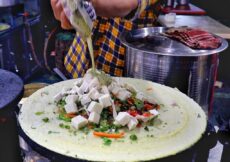 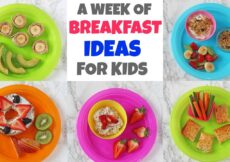