A Mojito is a cocktail that everyone is familiar with. It’s become on of the most popular drinks of the last 10-15 years. I think one of the main reasons for that is that a lot of bars have been using fresh mint when they’re making their Mojito, imagine that. So people are having these drinks made with fresh ingredients and they’re like, “Oh, my God, this is amazing.” I kind of have to wonder if every drink was made that way if they’d feel the same way about every drink they have, the way they do about the Mojito. In case you don’t know, here’s how to make a proper one.

So we’re going to start with some fresh mint. Like I said, into your shaker and you’ll notice this is essentially, a daiquiri made with a little bit of mint, and we’re going to top it off with soda water. So just like a daiquiri we’re going to do three-quarters of an ounce of simple syrup. Now that we have our simple syrup in there, we’re going to muddle the mint. And just gently press the mint leaves in there, so they extract the really beautiful, aromatic oils, but it doesn’t pulverize it and you get any of those really bitter tannin’s. You don’t want that.

That’s what I’m talking about. Okay, now we’re going to do three-quarters of an ounce, same amount as the simple syrup, of fresh lime juice. Again, I cannot stress fresh juice enough. Once again, it’s good to have our trash can nearby, because cocktails do produce their fair amount of waste. All right, three-quarters of an ounce of lime juice. The Mojito was originally invented in Cuba, and actually goes back to way back early 19th century. They’ve been drinking it over there for a while. It took some time to sort of sink in over here, but once it did, it really did.

I really think that this is just the regular Mojito, the best way to have it. You see blueberry Mojito’s and watermelon Mojito’s and that’s when you start to put processed, fake ingredients in there, and that’s not what you want. You just want the bare essentials. The freshest ingredients you can find. If you want to put fresh watermelon in there, that’s another story, but I don’t think that’s what those bars are doing. I don’t believe it. So that was two ounces of white rum and now we are ready to shake.

Let’s prep our ice in our glass first. Mojito’s a long drink, as you probably know, so we’re going to use a Collins glass. I like to use a lot of ice, because it’s a really refreshing drink, so we want it nice and cold. All right, now we’re ready to shake. Here we go. Okay, now you’ll see a lot of Mojito’s that have the pieces of mint floating in them. I really think that gets in the way. I don’t want to eat mint. It doesn’t taste nearly as good as it smells. So I like to use a strainer and strain it out. There little bits of mint that will come through, I think are all the really, pieces you need.

It still gives it that same, that nice texture, it looks great. It makes you think you’re drinking something really fresh, but it doesn’t really get in the way of actually drinking it. Now just a little bit of soda on top. And finally we’re going to garnish it off with some beautifully, picturesque mint sprigs. I just put them in a little bit of water to keep them nice and sprightly. All right, and there we go, the ever popular Mojito. 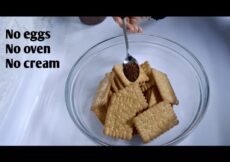 How to Make French Toast || 5 Min Quick and