There’s no city that’s more synonymous with cocktails than New Orleans, but only one cocktail is the official cocktail of New Orleans and that cocktail is the Sazerac. It’s extremely easy to make, extremely delicious, here’s how. We’re going to start with two ounces of rye whiskey. Originally it was actually made with cognac, because that’s a French ingredient, and as we know French and New Orleans have a log intertwined history.

But over time in the United States, it evolved into rye whiskey, which I think makes a better drink. It’s sharper than cognac which is very elegant, but also kind of subtle. So two ounces of rye whiskey and a few dashes of Peychaud’s Bitters. Peychaud’s is just a different style of bitters, similar to Angostura which is what you might be used to, but it’s a little brighter and has like a quality of anise to it that lends itself really nicely to this drink.

Again, it’s a French inventor. France, New Orleans, best of friends. One, two, three, I like to do four dashes. I also like to do one dash of Angostura bitters. This isn’t officially how it’s made, but I think it just gives it a little more depth. Like I said, the Peychaud’s are just very bright and I think it’s nice to ground it a little bit with a little bit of Angostura.

And now we need a sweetener and we’re just going to use regular simple syrup. One to one simple syrup. Just a bar spoon or a teaspoon. You really want to be careful when you’re using simple syrup in drinks like a Sazerac or an Old Fashioned, because they can get sweet really fast. There’s no citrus in here so there’s nothing to balance out that sweetness. Just enough to take the edge off the whiskey, but not too much to make it really sugary.

Speaking of the Old Fashioned, you’ll notice its really similar to an Old Fashioned, a Sazerac is. It’s just different bitters and little tweaks here and there, but same idea. Same template, different ingredients. And we’re going to stir a Sazerac, because again it’s all booze, there’s no citrus in there we don’t have to force any of the ingredients together.

All right, we’ve got about 20 seconds or so 25 seconds, and before I’m done stirring I’m going to grab my glass and show you the kicker to make the perfect Sazerca. Now it’s my frozen rocks glass, but we’re not going to put any rocks in this. We’re going to serve this cocktail neat, which means no rocks. But before we do that we’re going to rinse the glass in absinthe.

So I’ve got some absinthe here and if you’re wondering, that whole myth about absinthe making you crazy and turning you into a turn of the century Bohemian artist in Paris, that’s not true. It’s pretty much a combination of a smear campaign, by the wine industry, and just a legend sort of evolving over time Absinthe is fine to drink. You would probably die of alcohol poisoning, before you drank enough absinthe to hallucinate.

So we’re just going to rinse the glass in absinthe, because it’s so potent and so high in alcohol. Like I said, you’d have to drink a lot of it to hallucinate, but not a lot to get alcohol poisoning. So just a little bit, a few dashes are going to sort of coat the glass, and give you this bouquet of aromatics that are really going to impact the drink when you drink it. And you can drink this or you can dump it out. It’s early so I’m just going to dump it out. Mm, smells delicious.

Now we’re going to finish stirring. It’s okay to leave your ice melting , as long as you’re not stirring, it’s not going to dilute too much. Just don’t forget about it, because you don’t want to over dilute. Now I’m going to strain this baby in there. I know this looks like a really short drink, but trust me it packs a pretty serious punch. And for the garnish we’re just going to do a lemon peel. Now we’re just going to twist or peel off a little slice of lemon.

I don’t like those knives that have that really deep thin peel, because you get too much of the pith which is bitter, and this way with the larger swath of lemon I can do this. If you hold the white part towards you and then the outside towards the glass and gently squeeze it, I don’t know if you can see it, but there are oils expressed through the pores of the lemon into the drink, and oh yeah, you really get it.

Even with that absinthe in there you can really smell the lemon. And I’m not going to drop the peel in there. I’m just goi 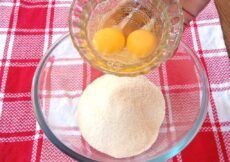