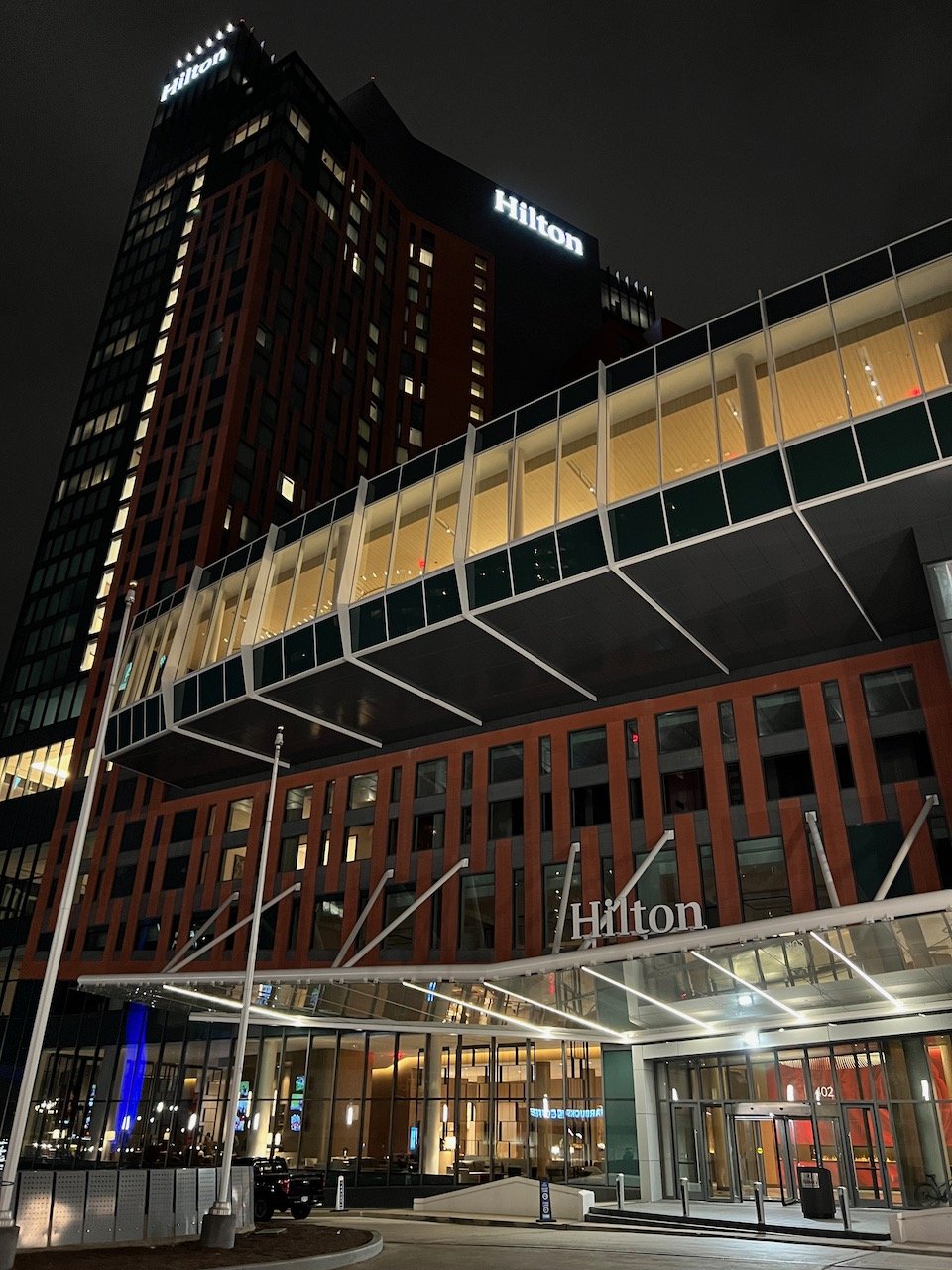 In case you missed the news earlier this month, the brand new Hilton Tower, part of the Downtown Hilton Columbus, has opened for room stays, restaurant reservations, and conferences. With the opening of the tower, the Hilton is now the largest hotel in Ohio with 1000 rooms total. Its opening also includes the new eateries Spark and FYR, with a rooftop restaurant and bar coming soon.

We got a tour of the new facility, so join us to get a look inside! 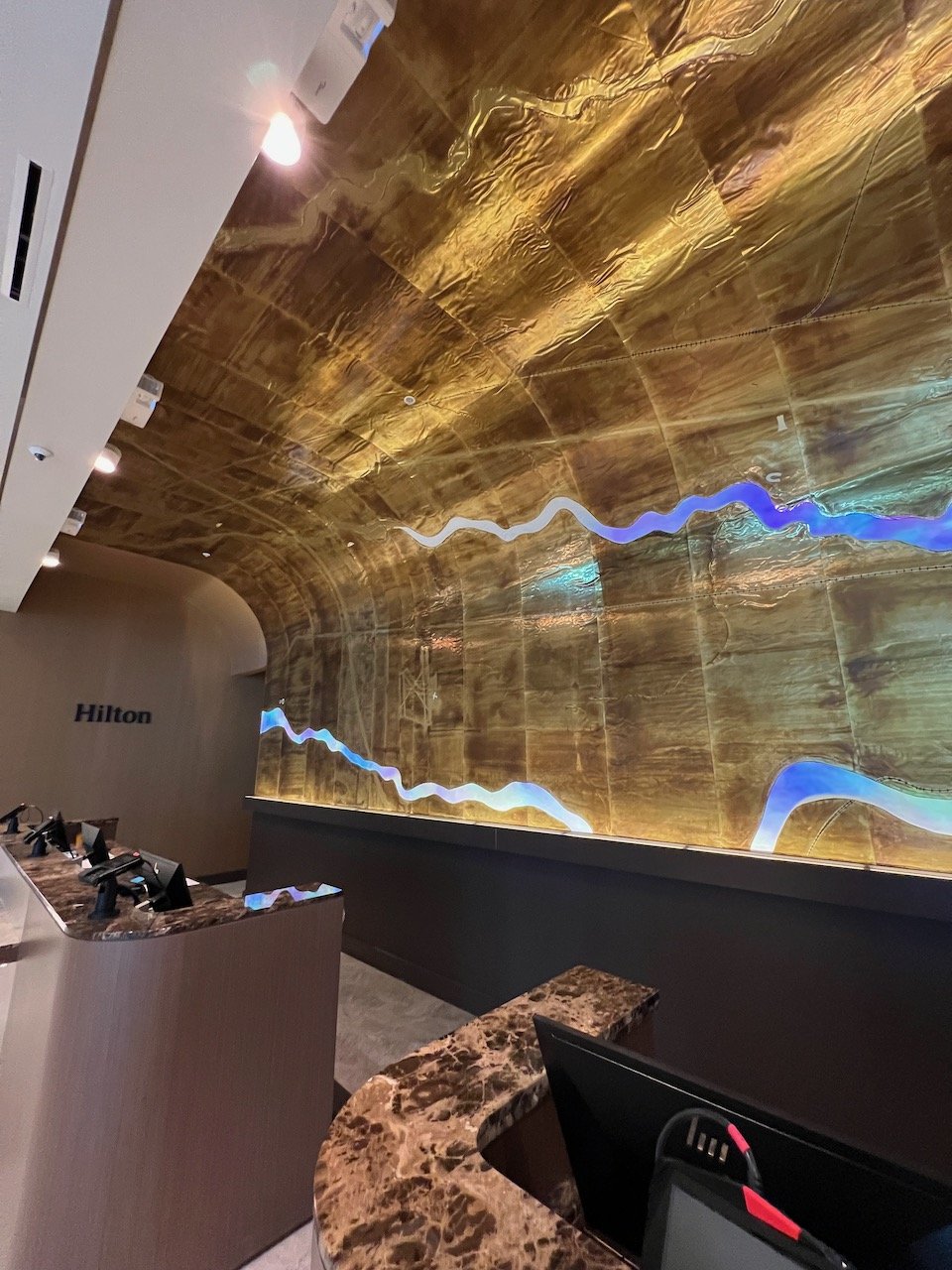 The hotel lobby features a massive reflective backsplash behind the desk that highlights the rivers and the city’s main arteries. 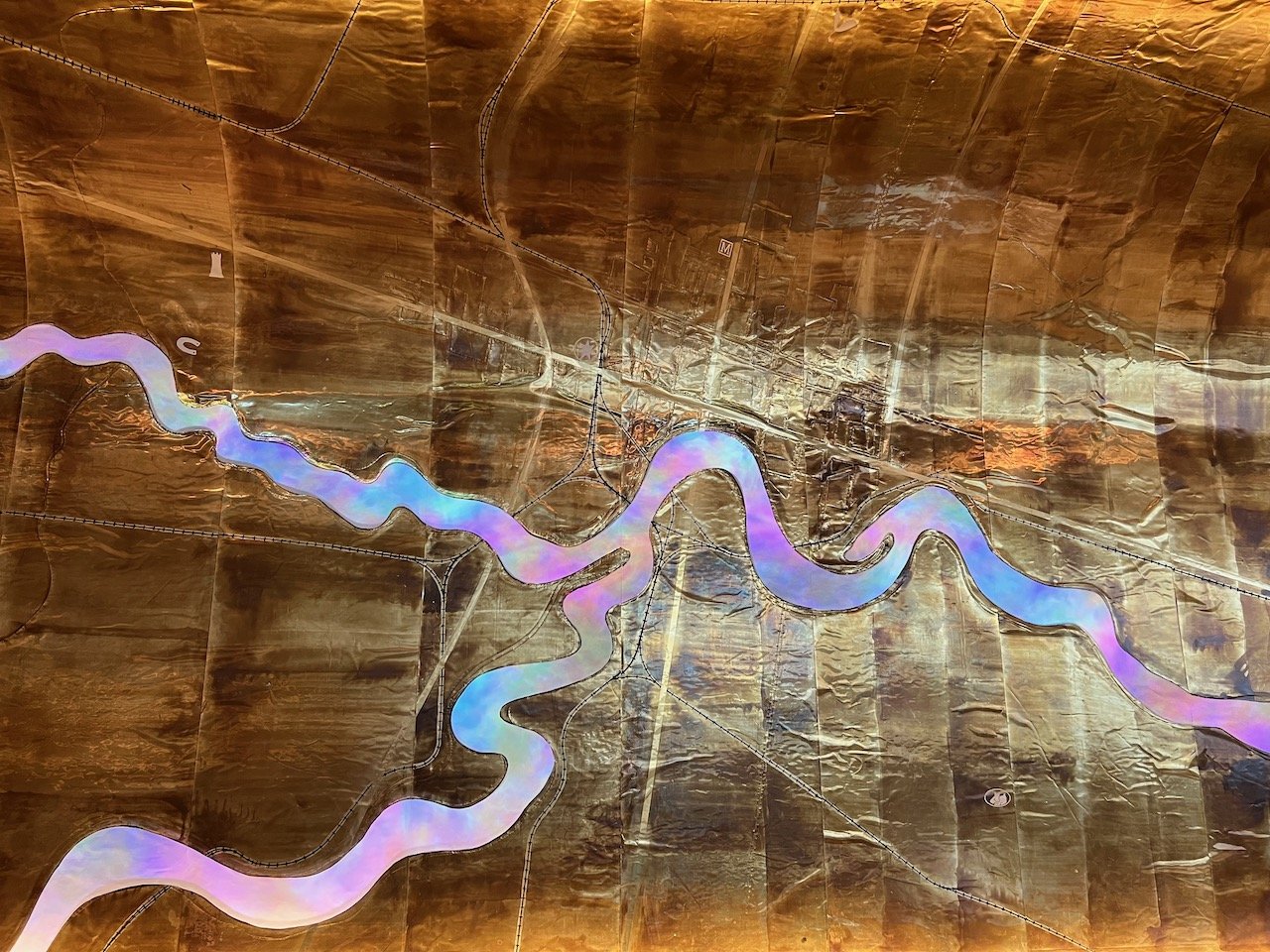 You need to stand and stare at it to spot all the landmarks dotted throughout. 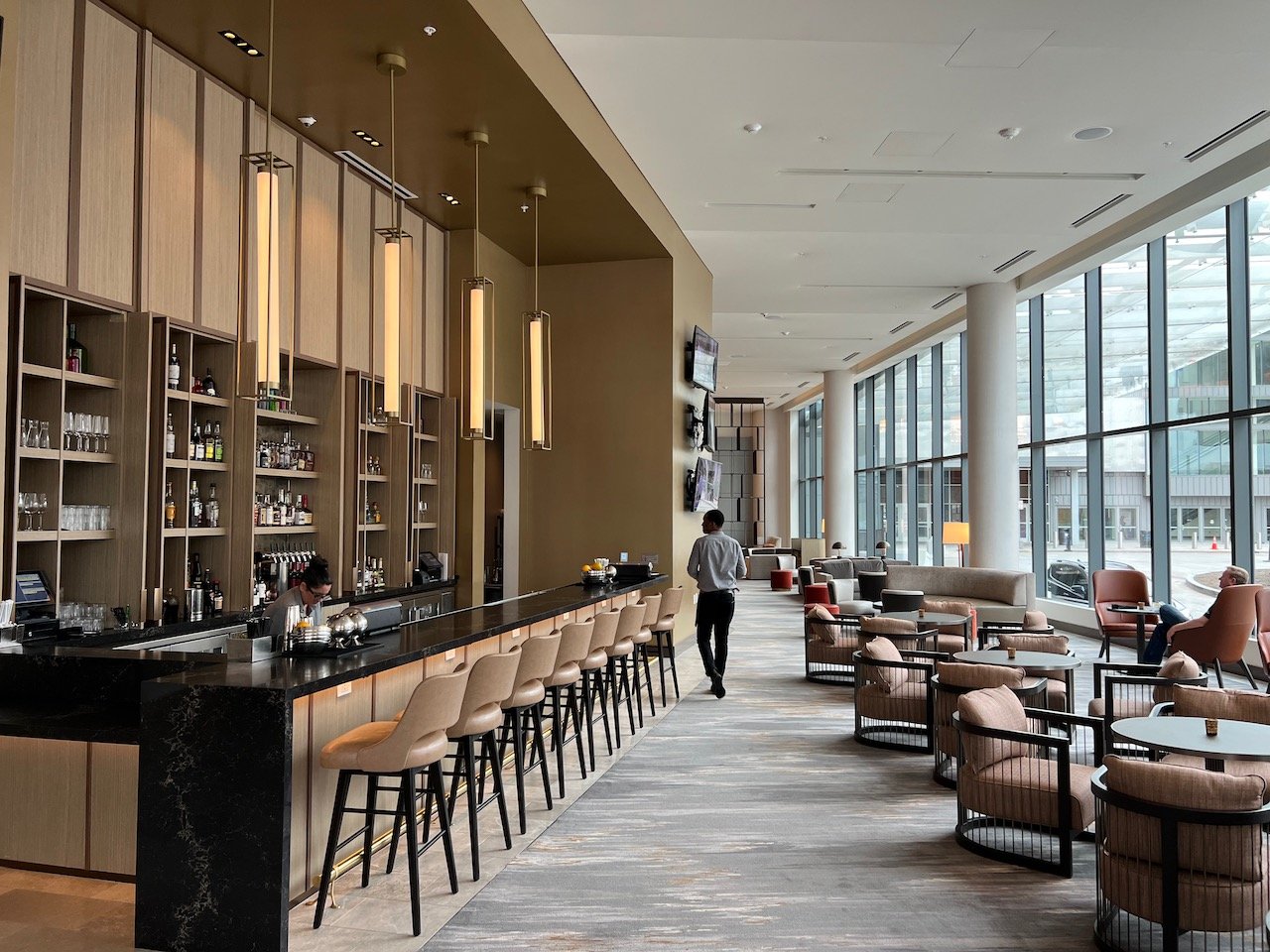 Just off the main lobby sits Spark, a restaurant and bar featuring an all-day menu with cocktails and craft beers. It opens daily at 11:30 a.m. 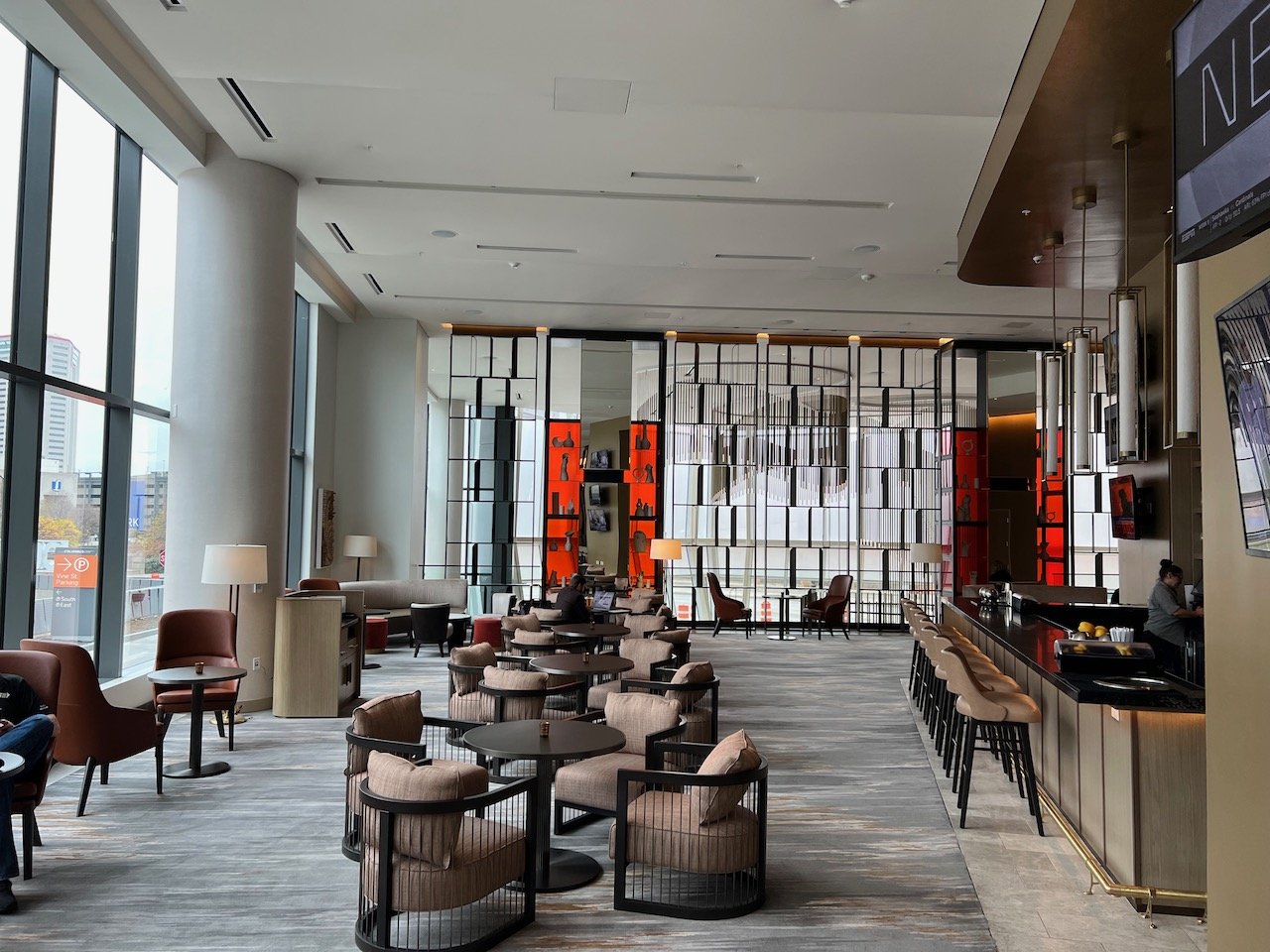 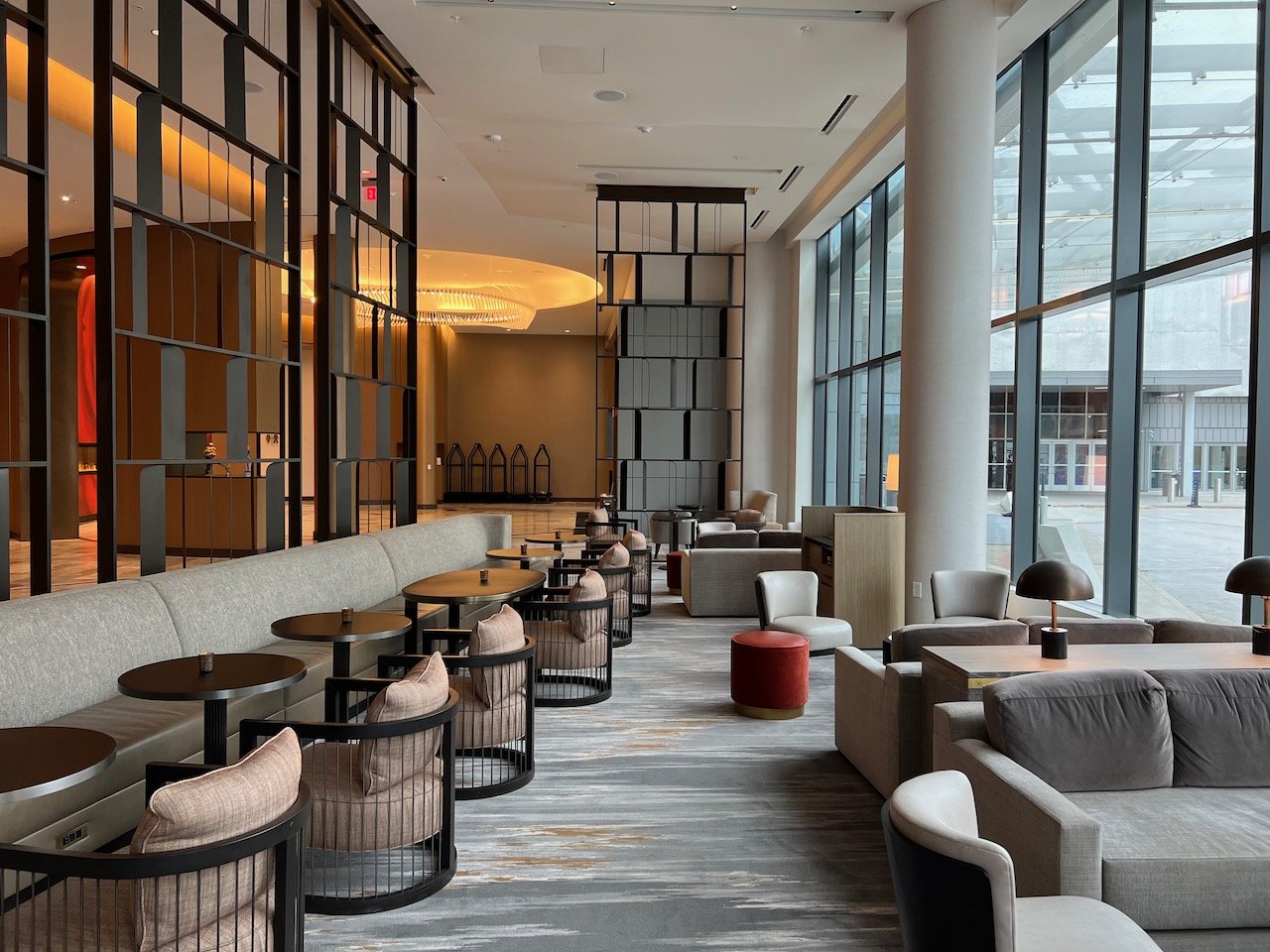 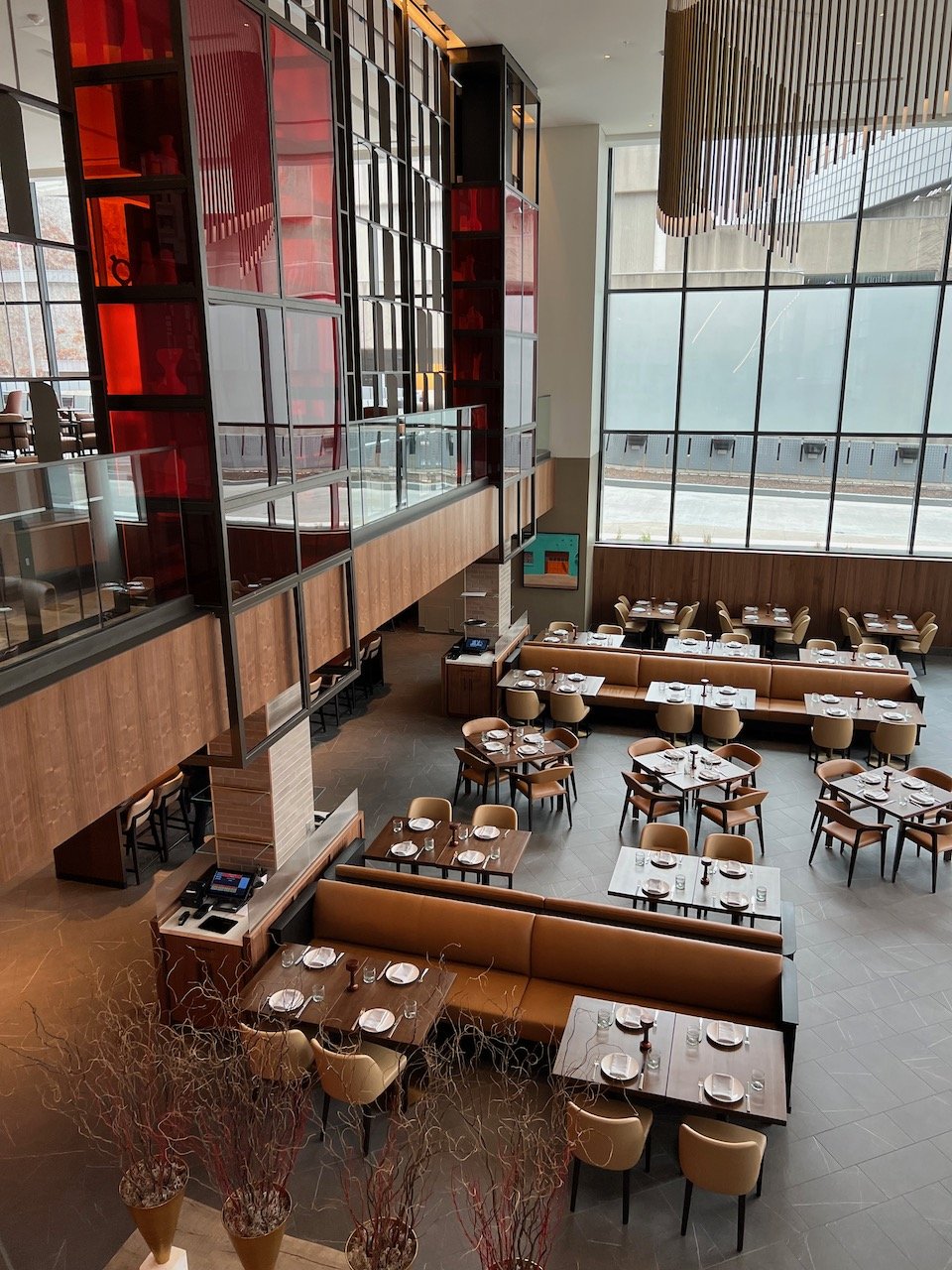 The other major addition is FYR, a live-fire cooking eatery headed up by Argentinian chef Sebastian La Rocca. 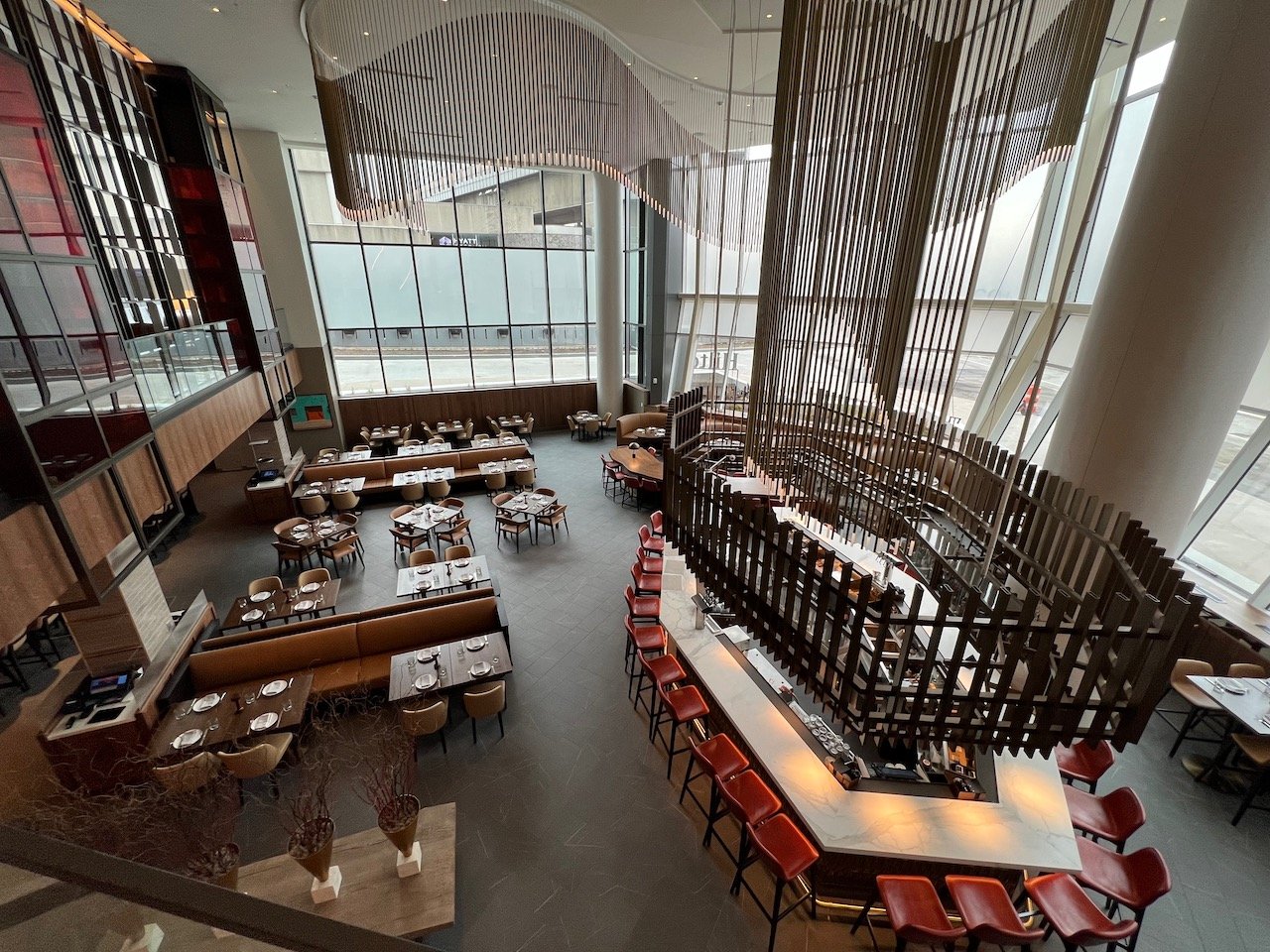 FYR currently serves breakfast, dinner, and drinks. Stay tuned for a closer look at it! 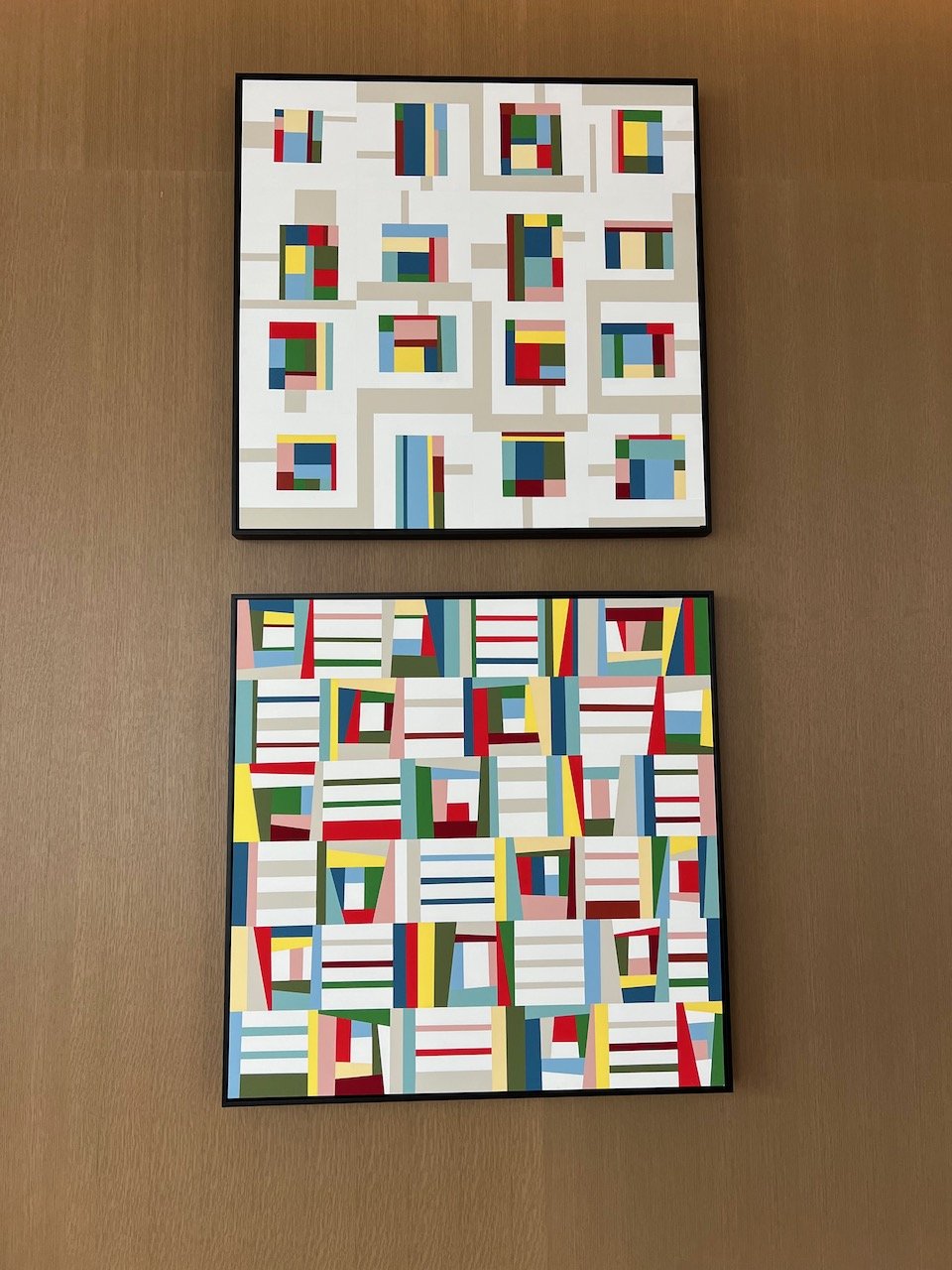 Just like the original Hilton and the adjoining Convention Center, the new tower focuses on Columbus-area artists. You’ll find artwork scattered throughout the common spaces, with dozens of dramatic pieces chosen to draw the eye.

My only complaint is that the pieces are unlabeled (at least from what I could see). I would love to see the artist names, titles, even a brief statement on each piece. 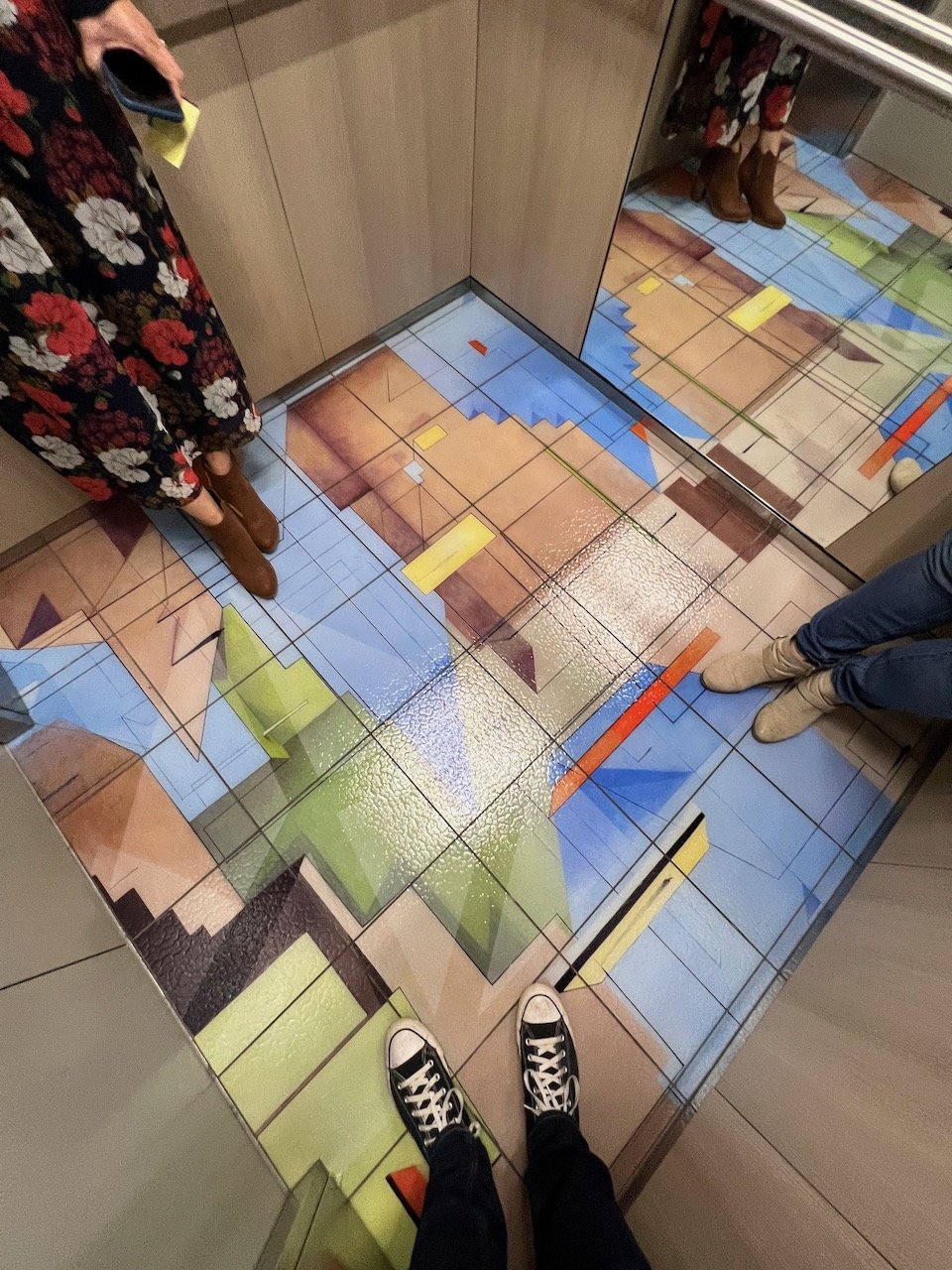 Even small details like the elevator floors feature an artistic flair. 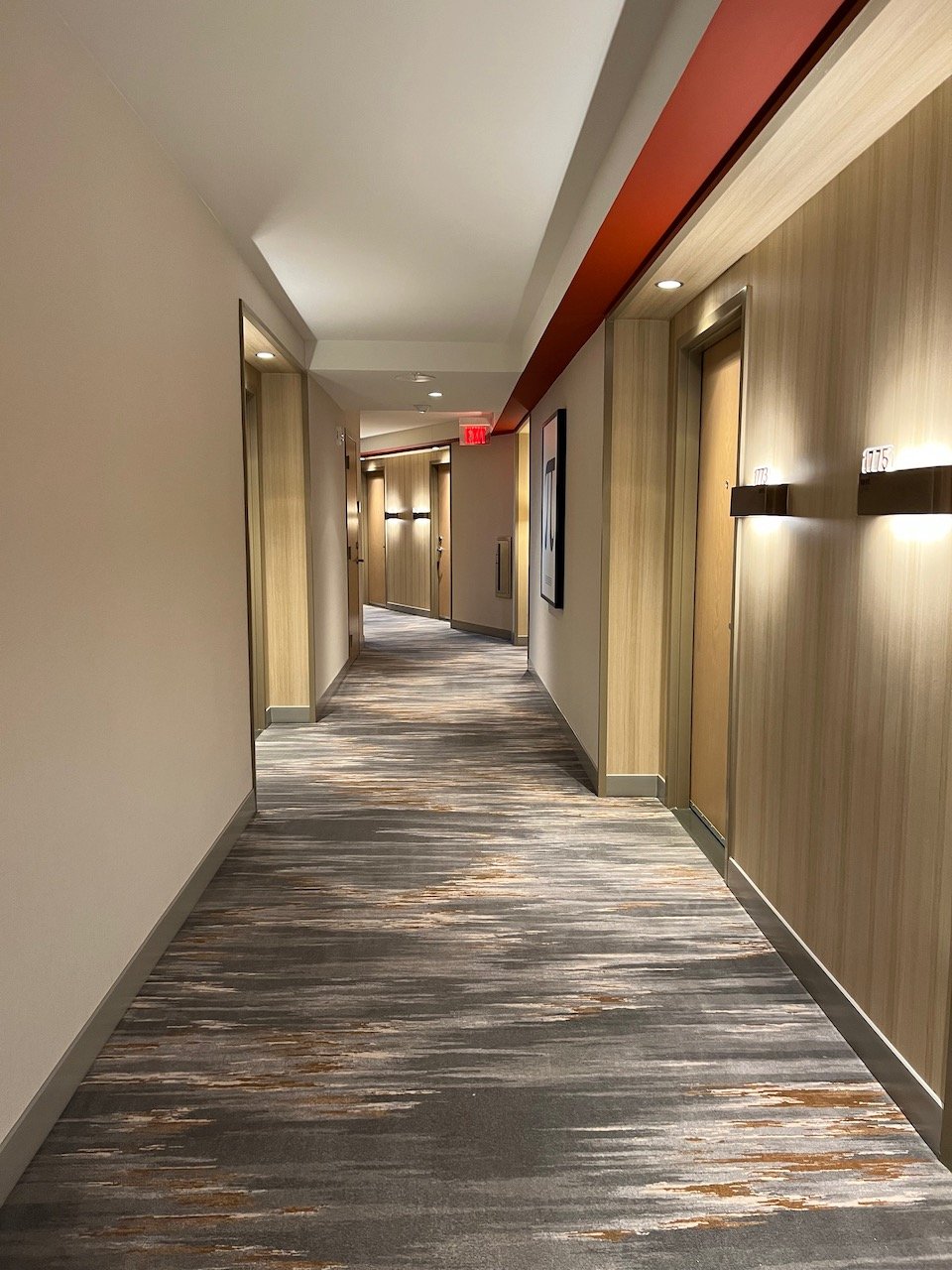 The 28-floor tower adds 463 rooms to bolster the grand total to 1000 for both properties. 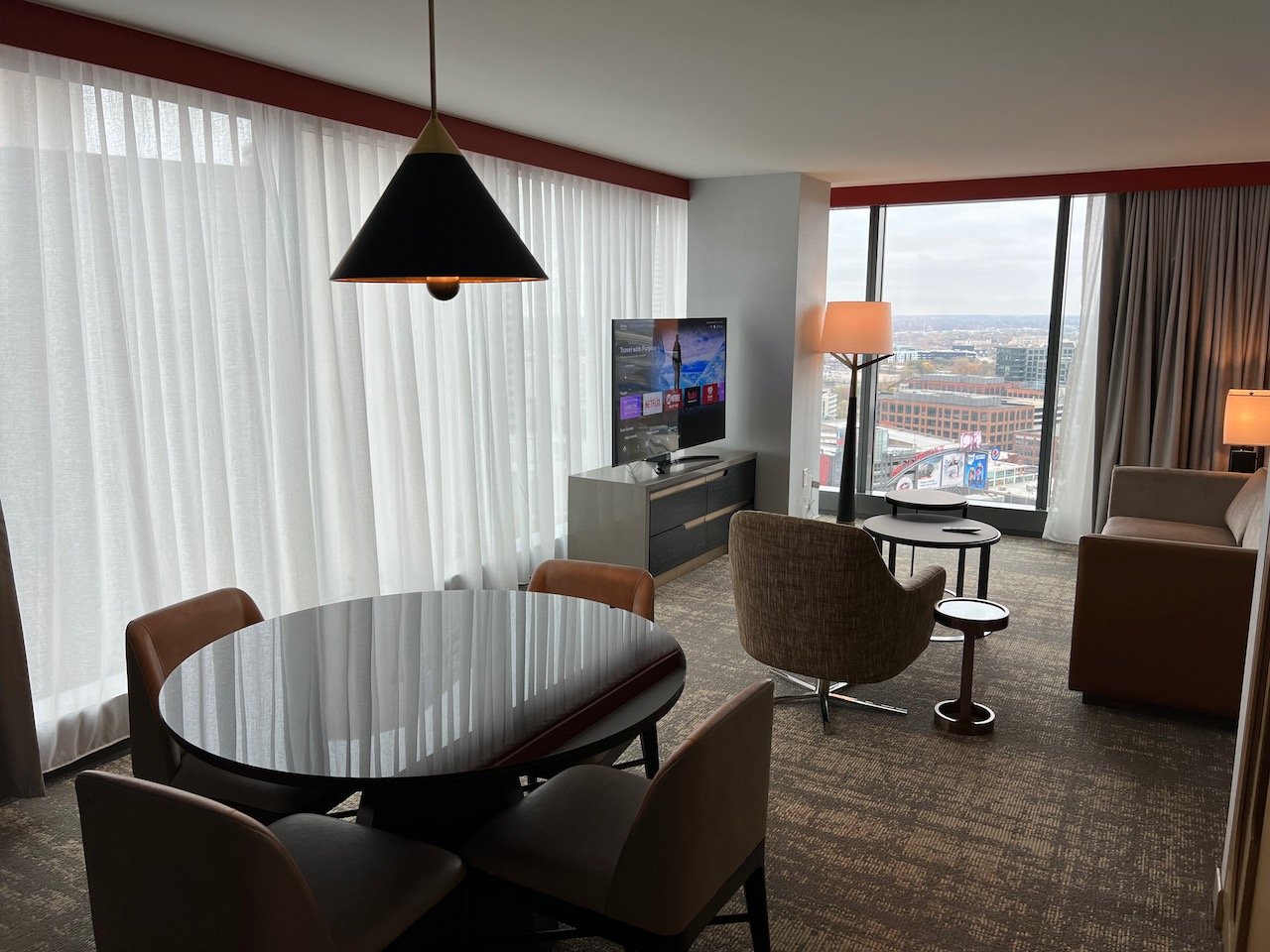 The layout makes use of the hotel’s height to offer new views of downtown Columbus and the Short North. 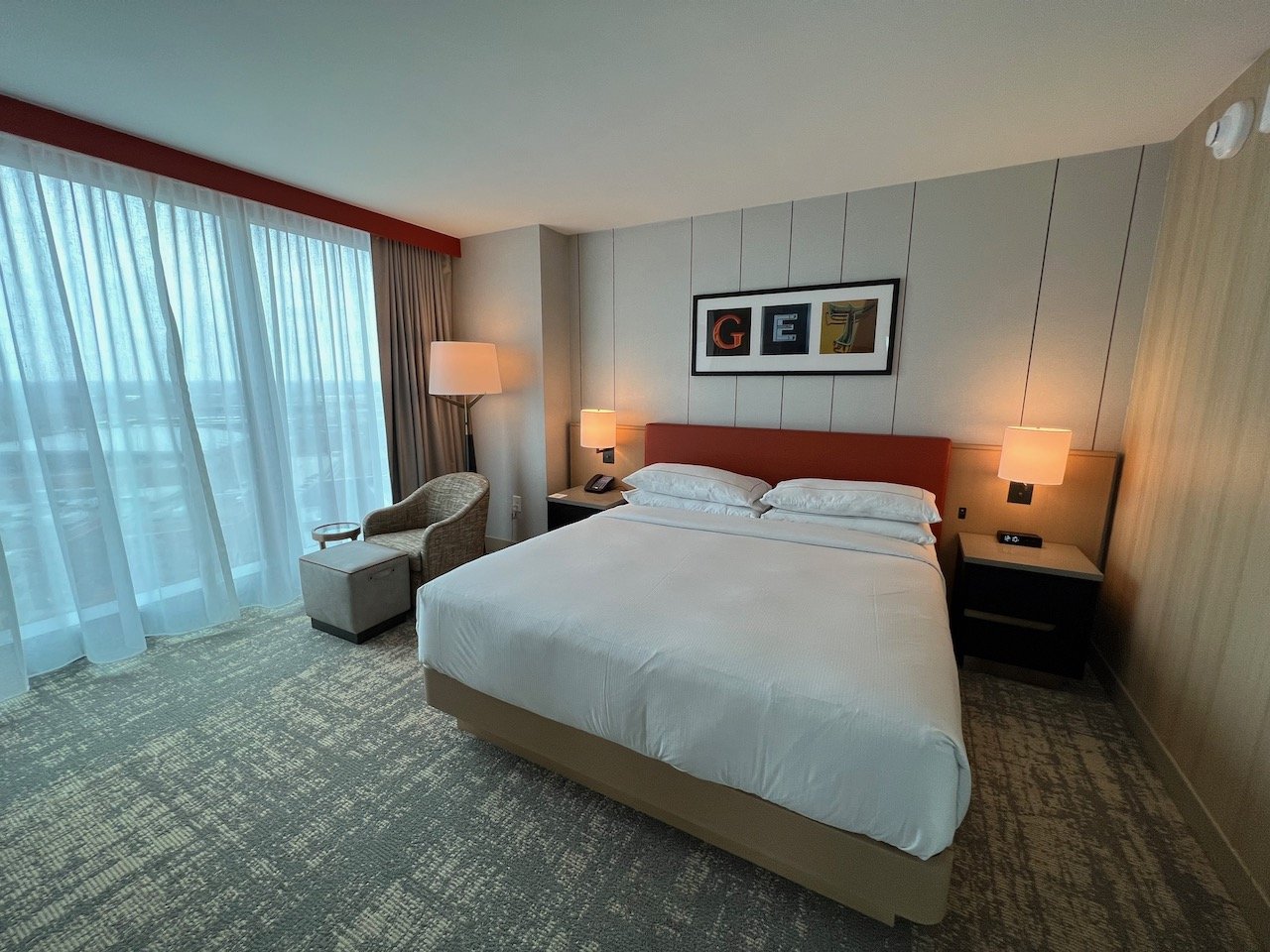 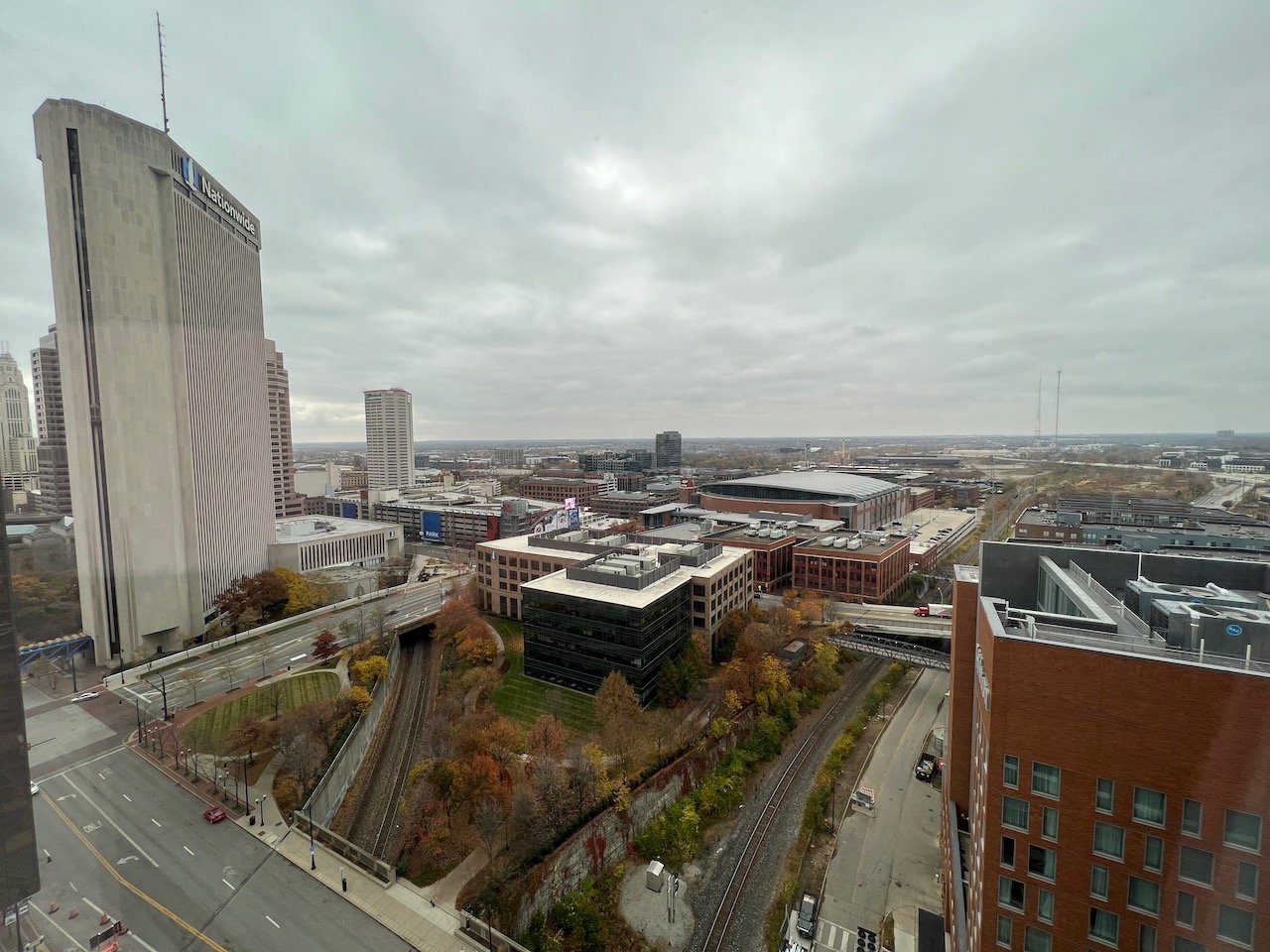 Many rooms offer a unique look up Nationwide Boulevard to see Nationwide Arena, Huntington Park, and Lower.com Field lined up in a row. 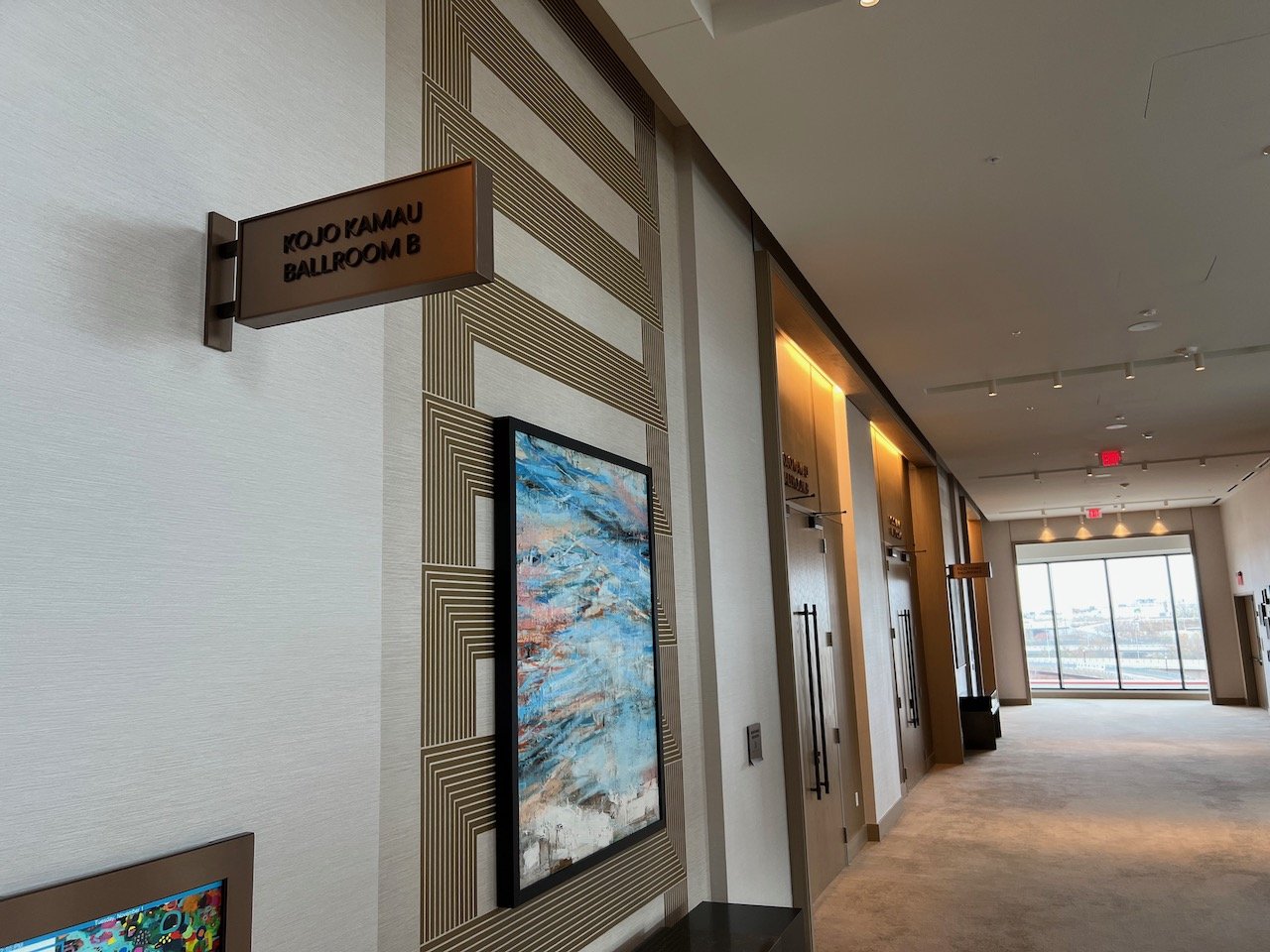 The second floor of the hotel features a collection of ballrooms and meeting rooms, all named for notable Columbus artists. 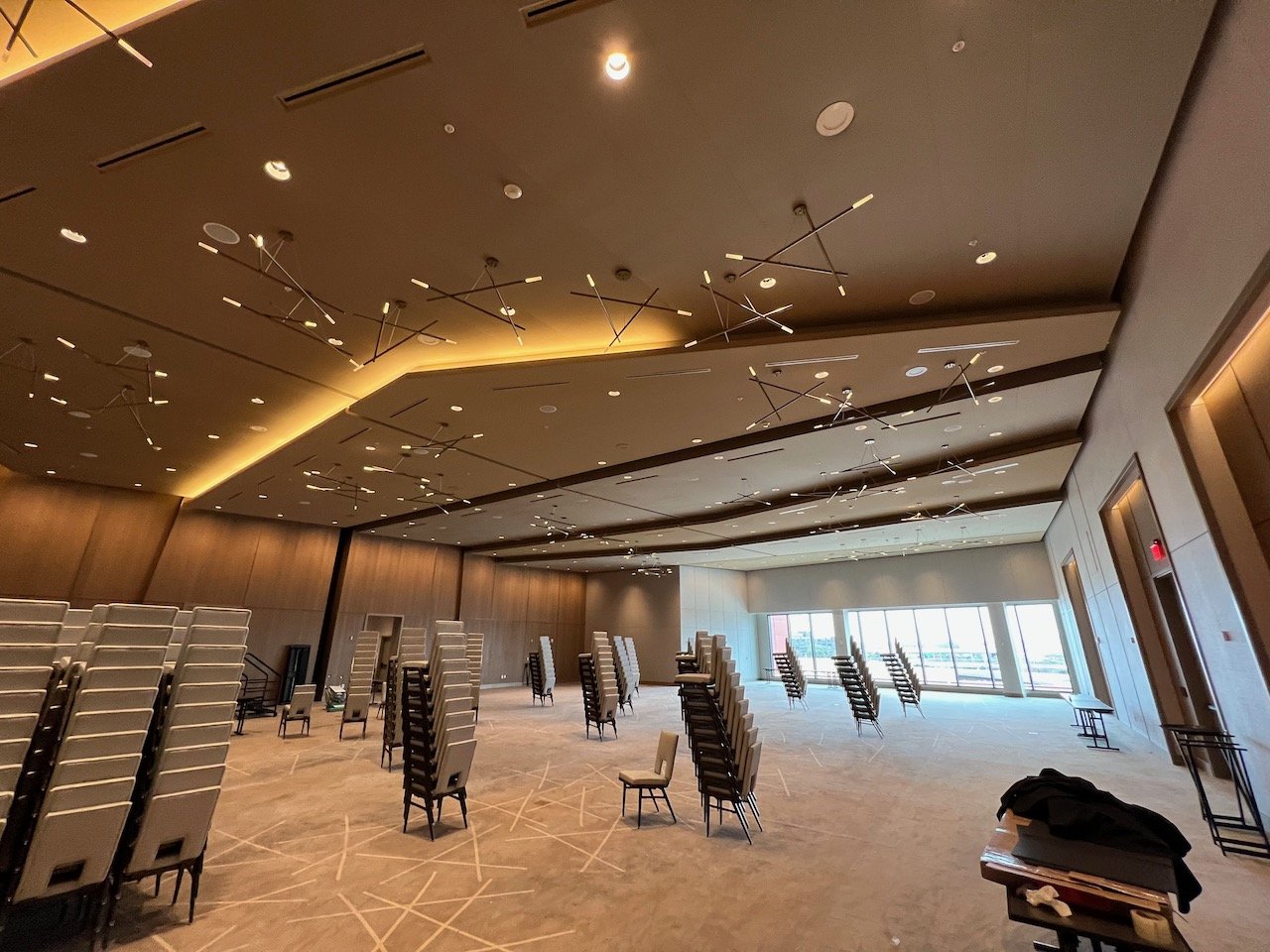 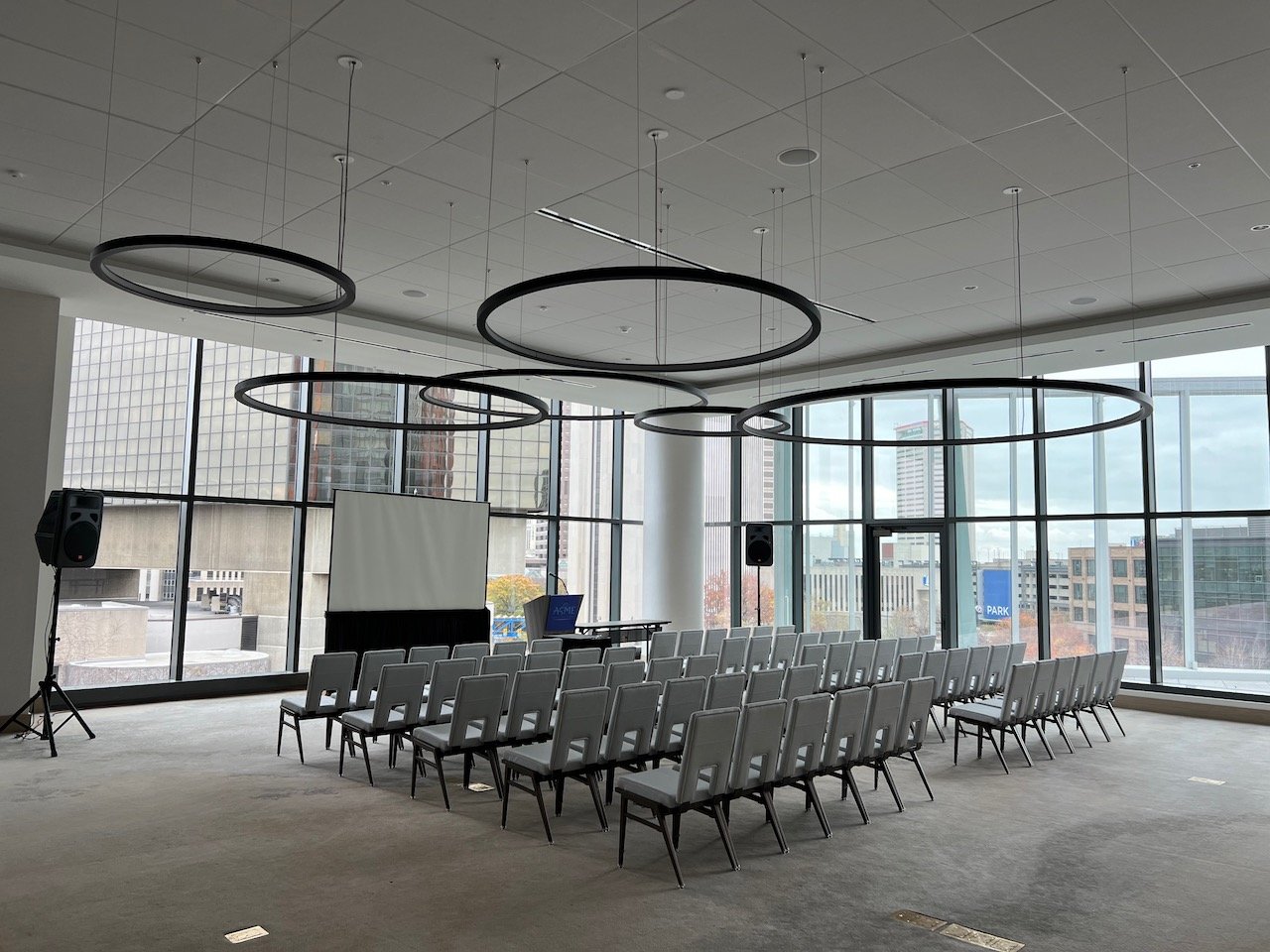 We noted with relief that the meeting rooms offer plenty of natural light. We all have memories of going to conventions (I remember my 2018 Americans for the Arts convention in Seattle) where you sit in windowless rooms all day hearing panel after panel. This way you get a little vitamin D and still feel connected to the surrounding city. 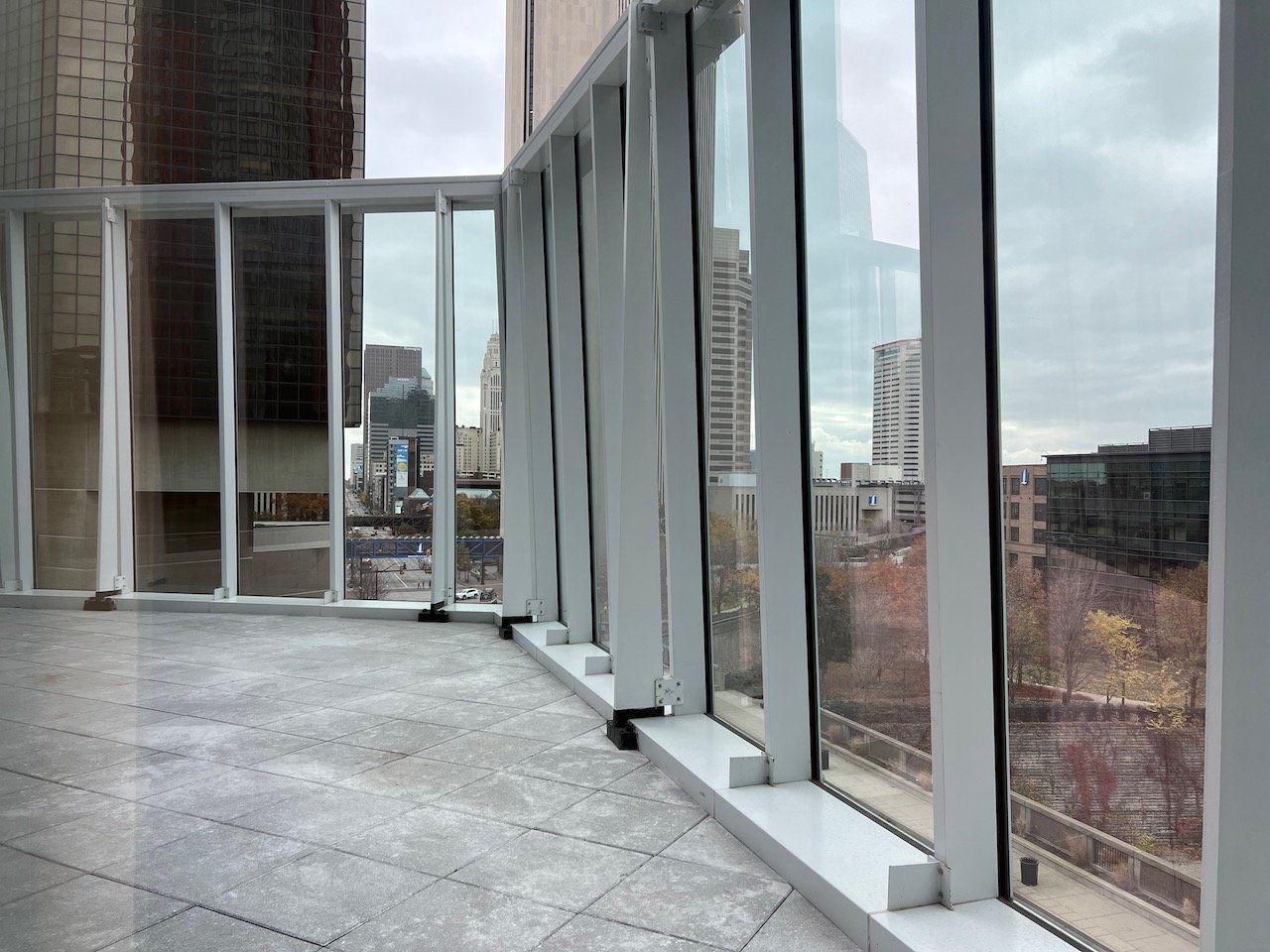 Some of the meeting rooms also include their own enclosed patios. 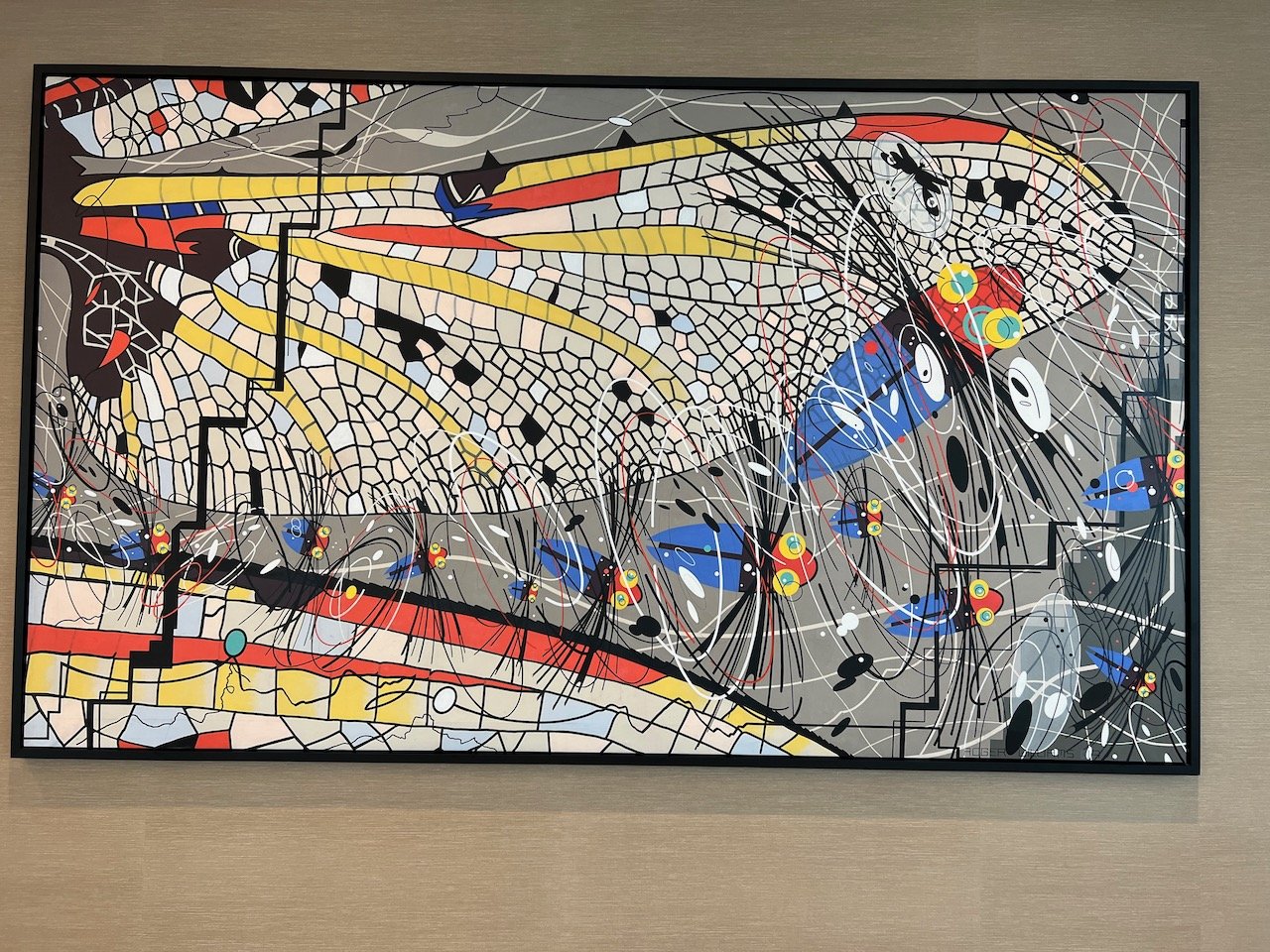 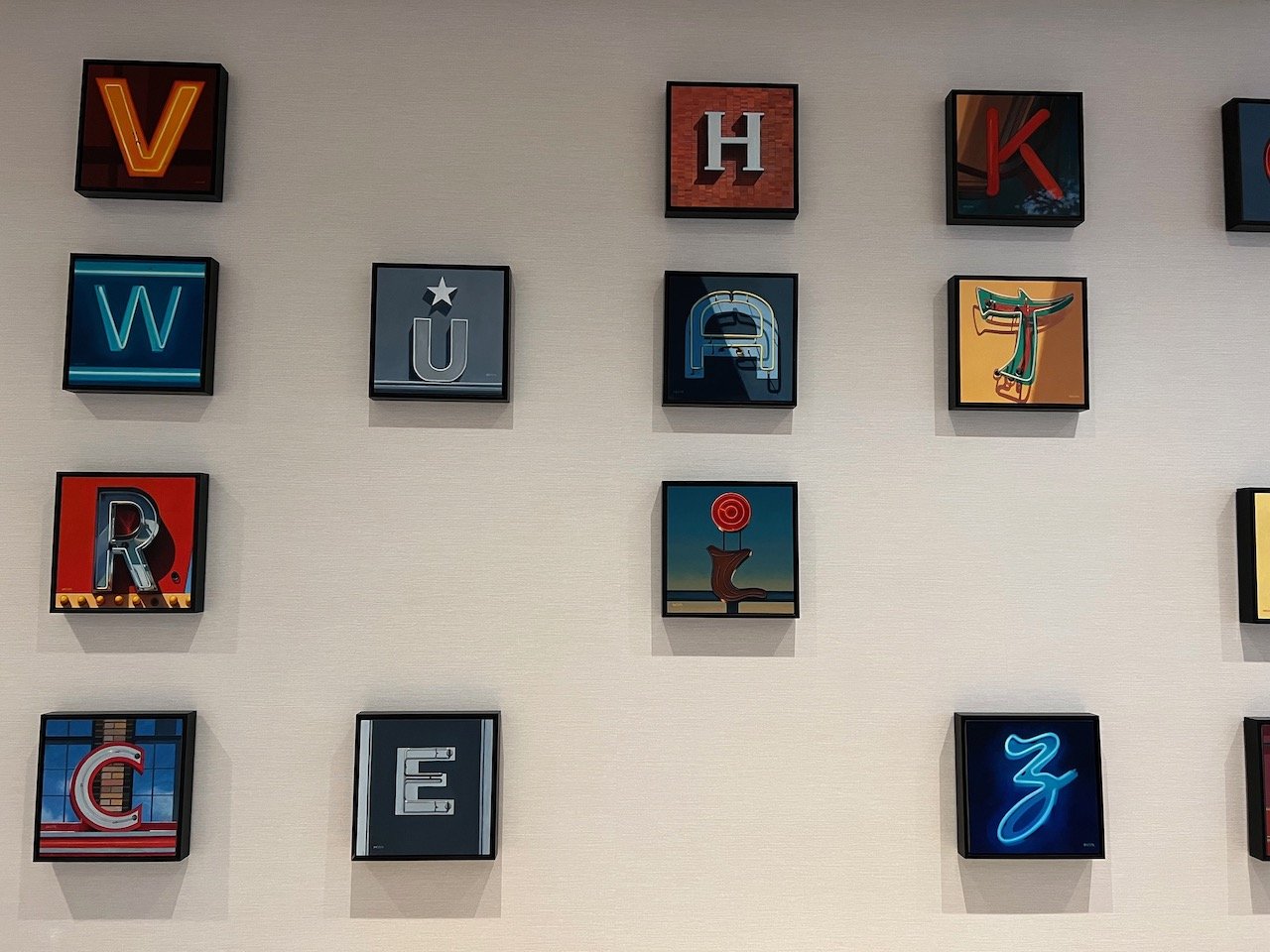 One of my favorite pieces of artwork is a collection of photos depicting the full alphabet using neon signs from around Columbus. 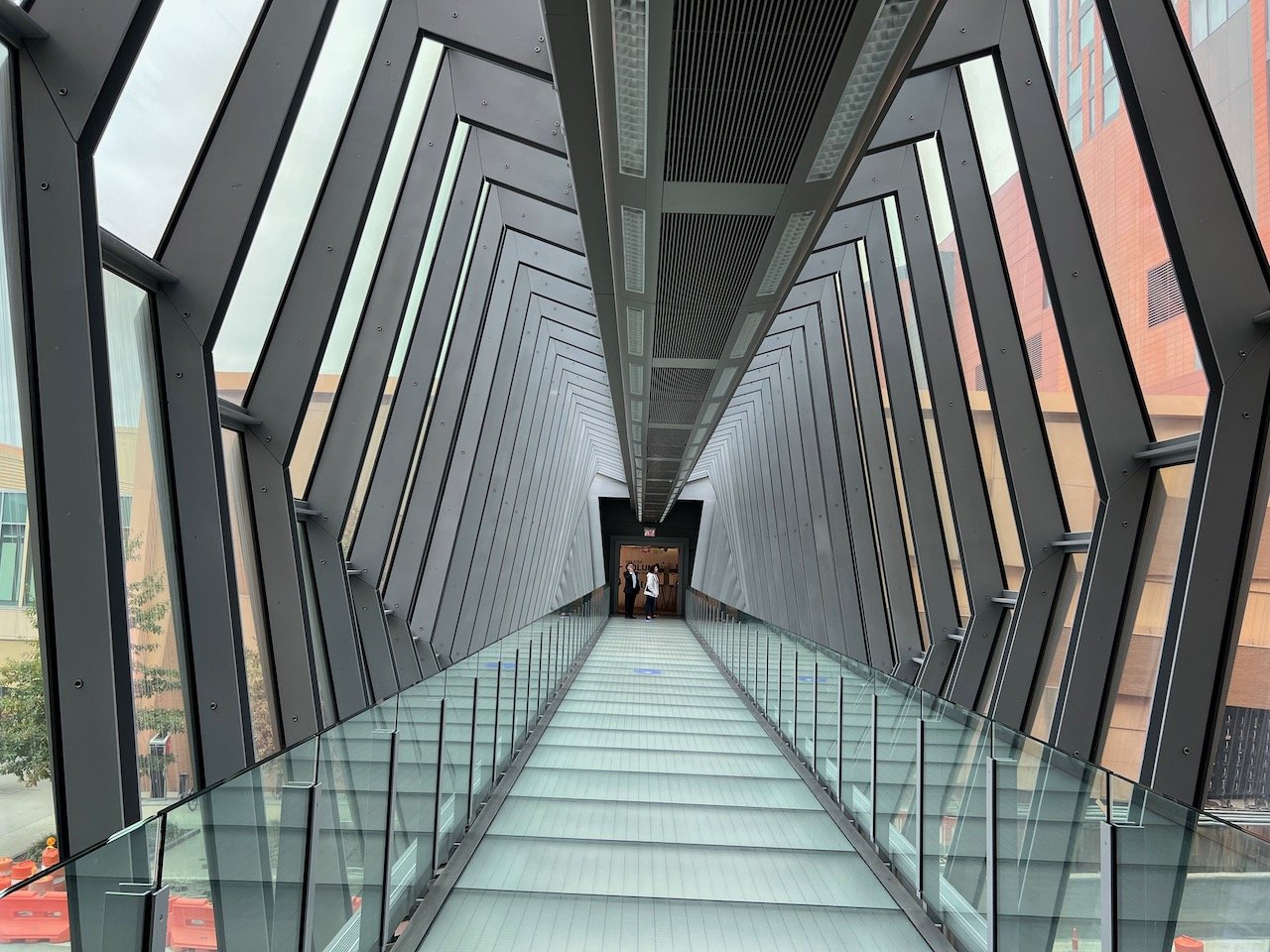 The tower is connected to the original Hilton via the skybridge. Guests have the option to valet park their car at the original structure (or park themselves in the Vine Street garage), then cross over to the tower and the Convention Center. 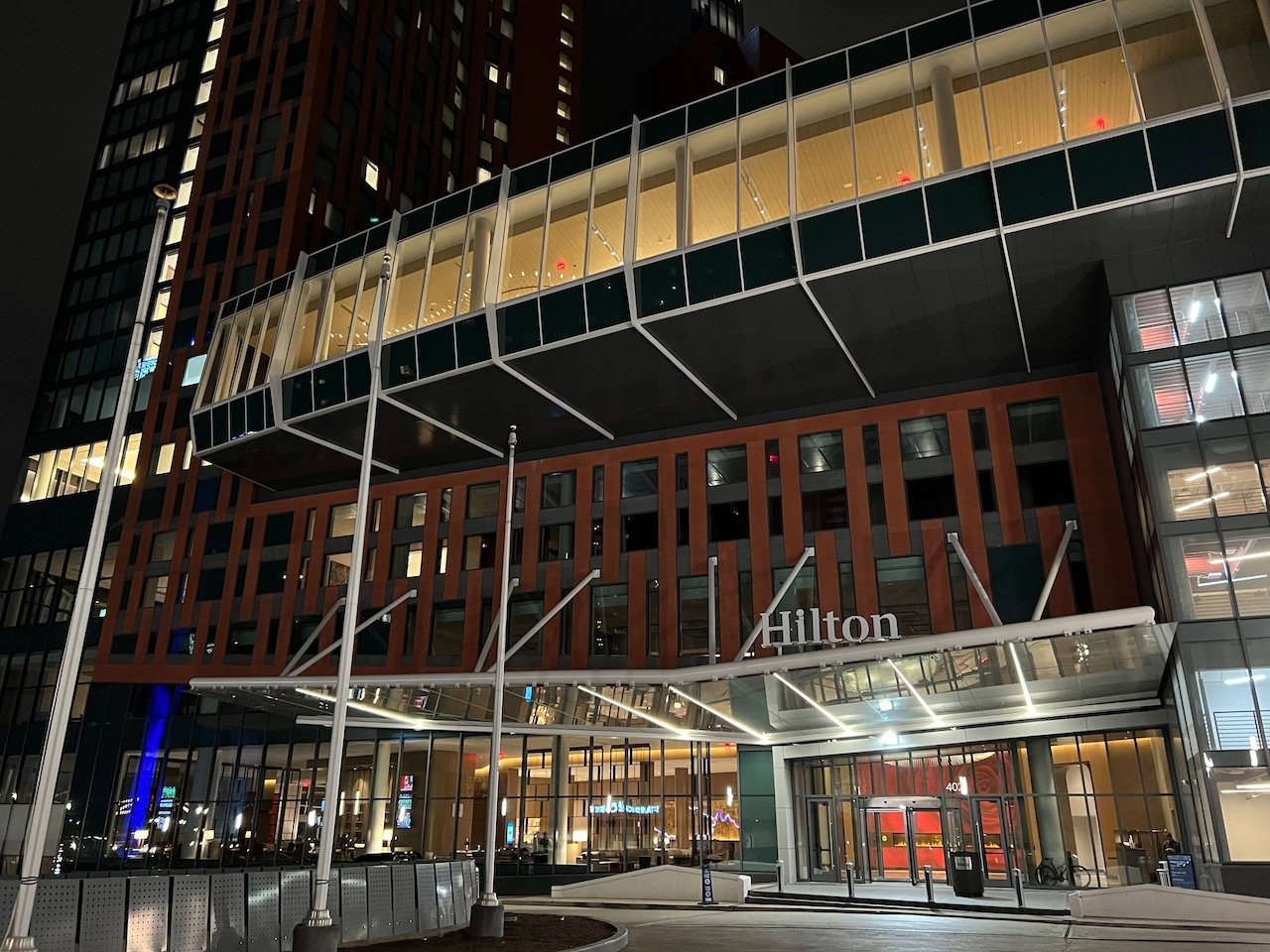 The new tower is an impressive addition to downtown Columbus, literally changing the landscape. I’m sure this will help with selling conventions and for sports attendees.

Stay tuned for a look at FYR!