Ryan Casey’s reverence for the Negroni’s equal-parts template had, at times, proven a bit of a roadblock to creating variations on the classic. “I think a Negroni’s about perfect so I try not to mess with it too much,” he says. Four years ago, while working on ideas for Negroni Week, an annual charitable initiative with thousands of participating venues, he posed a question to himself. How could he transform the drink without changing its faultless composition?

Casey found his answer in aging. At the time, aged cocktails were having a moment. Then the beverage director at The Dewberry in Charleston, South Carolina, Casey had been following what Alex Kratena and Simone Caporale were doing at London’s Artesian Bar—aging cocktails in traditional vessels like wood, but also in oddball materials like leather. Casey saw aging as the key to doing something unusual for Negroni Week that simultaneously honored the original drink. “[It] was a really fun way to manipulate, to change a cocktail, to kind of put your signature on it without messing too much with the classic.” Though he had previously used vessels like clay amphorae, this project pushed him to choose an unlikely chamber of transformation: a coconut.

That’s when R&D began. It wasn’t so much about what was going into the coconut—his recipe remains true to the equal-parts formula of the original—as about the coconut itself. “You’ve got to cut a hole in a coconut, so finding the right-sized drill bits and such to do that, then sanitizing everything and making sure we were doing it clean, yeah, there was some trial and error to get us there.” Once he settled on the right drill bit (a 1-inch hole saw) and how long the drink should sit in the fruit (10 days), he was on his way.

Casey did, however, make one important change to his usual Negroni spec. He knew “it was going to mellow and take on some sugars” in the coconut, so rather than altering the classic equal-parts ratio, he opted to use an overproof gin—Tyler’s Original City of London—to ensure the finished drink would still have the necessary structure. He chose vanilla-heavy Carpano Antica sweet vermouth to join the Campari and overproof spirit.

For Negroni Week 2017, Casey presented his coconut-aged Negroni, along with a Jamaican rum–based Kingston variation (aged through the same process), in the Dewberry’s Living Room Bar, poured directly from the coconut, which had been fitted with a standard pour spout. The literal white-glove service was rounded out by hand-chipped, branded Clinebell cubes and orange twists.

Despite being created four years ago, the technique is right at home in the current taste for aperitiki. Looking back, Casey sees the unmined potential of aging in coconut more broadly, perhaps even leaning into its inherent tropical qualities. “Quite frankly,” he says, “it seems like there’s an opportunity to do a lot of other things in [coconut]. I always thought about doing a Daiquiri, a Mai Tai.”

Casey admits he was wary of putting anything other than spirits through the process at the time, but he reasons that there’s likely no risk in doing so. “If you fill the thing all the way, and then plug it and stick it in the refrigerator, there’s no oxygen getting into it,” he explains. “If it’s kept below 60 degrees, it should be okay.” Coconut-aged Bamboo, anyone? 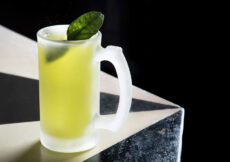 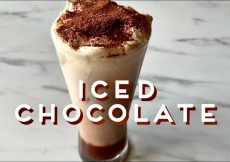